I Love This Horse

Recent posts by a couple of the ladies on EI about medical issues with their horses made me pause to think about Gayliena, aka Gailey, my Hanoverian mare (If you're into breeding by Grusus/Grunstein out of EM Apfiel, Akzent/Cavalier.)

I'm not one of those dressage riders with unlimited funds. This will probably be the only horse I'll ever own of this quality. I would be devastated if something happened to her, not just because I couldn't replace her monetarily but because I'm so attached to her.

Granted, I haven't been the most dedicated rider this past year. I'm lucky to get to the barn 2-3 days a week, as opposed to 4-5 days a week before I became a published writer. 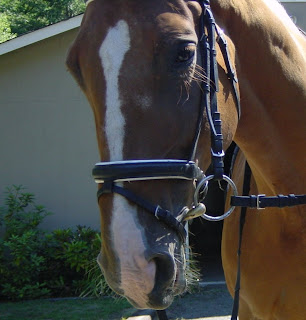 Regardless, I adore MY horse. She is my horse of a lifetime. This year she turns 14. I bought her as a green-broke 3 year old. If you've been following my posts on this blog, you know that she and I have been through a lot together, including trailering traumas, lamenesses, and various other issues over the years.

Yet, through all the ups and downs, I wouldn't sell her for any amount of money, and I did turn down some lucrative offers in her younger years. To be honest, I know she would have gone far in dressage with a better rider. She'd have won a lot of ribbons and probably easily been a Grand Prix horse. To give you an idea of how wonderful of a smooth mover she is, a doctor friend of mine told me once that if I would have just sold her my horse, she could have ridden up until she was 8 months pregnant.

Instead, she's stuck with me. I'm not a bad rider. I mean, I've been doing this for a couple decades. But my body isn't really coordinated, and this dressage stuff is hard for me. But I keep plugging on. Once in a while, I forget to try too hard, I relax, and it all comes together.

Like a former trainer told me once, the horse doesn't care if it wins blue ribbons or scores high. It only cares that its treated well and ridden kindly. 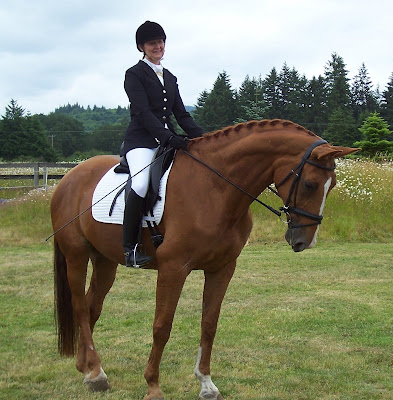 So Lately, I've been pondering how lucky I was to have known this beautiful creature for eleven years. Last Thursday night, it was really driven home to me. I've been on deadline for a book. The only time I've managed to ride in the past few weeks was during my lessons. So I mounted up on Thursday night, feeling pretty good for the first time in several weeks. It was one of those all-too rare rides that all you can say is "oh, wow."

The second she started out in the walk, I knew we were in for a good ride, and we were.

When I think of dressage, I think of these moments. I hope that everyone who has ever tried dressage has had the good fortune to experience such moments when everything comes together. When your horse is up in front of you, eager to go, but waiting for your aids. When such raw power surges under you that you're in awe. When it takes the slightest pressure from hands, legs, and seat to perform the movements.

That's how I felt. As we moved into a trot, she started to fall on her forehand and plow into the reins. I caught her with some well-placed half-halts. She rocked back. Her shoulders came up. Her butt tucked under. I sat in. It was like sitting on a big comfy couch, yet with incredible controlled power. I can't explain it, but I wish I could. If you've felt it, you know what I'm talking about. I came across the arena in half pass. For once, my legs, seat, and hands actually did their respective jobs. I weighted my inside hip bone, kept my inside leg on, kept her bent around my inside leg, pushed her over with my outside leg. I stayed straight instead of twisting and kept some tension on the outside rein. Oh, wow, over she went like it was nothing!!!

Okay, now we're going to canter. Lately, she's been dumping and taking off. I asked for the canter. She lifted into this beautiful uphill canter, light on the reins, collected but ready to go. We did shoulder-in, half pass, haunches-in like they were the easiest things on earth. We came down the diagonal and changed leads. Again, easy as can be. Uphill and clean. We slipped from a canter to an uphill forward walk. She sauntered around the arena on a loose rein, quite pleased with herself, as she should be.

I needed that boost, that encouragement to keep at this, to remember why I do this.

I love this horse.

Posted by Jami Davenport at 2:40 PM

WOW! I've never made it to dressage at that level but I've felt that feeling before--when everything just comes together and is simple and magical. AMAZING. *hug* your mare for me!

It doesn't matter what level you've ridden because it's the basics that matter. When the basics are right, everything else is easy.

I will hug her for you.

Wonderful story, Jasmine. All of us who love horses and riding can celebrate this great moment with you. The thrill of horse and rider connection cannot be compared.

I am not an accomplished rider and only ride western -- no competing, just pleasure. In my younger days I had a wonderful Saddlebred who could go with English or Western. I would ride him for a while Western, and my girlfriend would then put her English tack on for a ride. Turk was amazing.

MaryAnn, Everytime I go to the barn and look at my horse, I can't believe she's mine. Yes, she's been a challenge, but I've learned a lot from her, and we have a connection. She always waits for me at the gate when I pull up and seems happy to see me.

I don't think it matters what you ride or what level you ride. I know you can connect with a horse while trail riding or doing natural horsemanship, etc.

I don't know why you said you couldn't describe it. You did and beautifully. It was lovely.

Horsemen certainly can use a day now and then like the one you described. It makes all the stall mucking and riding fractious youngsters worthwhile. I was particularly pleased to see you use a variation of a phrase I use all the time in real life and also in "Fame & Deceit" Once-in-a-lifetime horse." I love this following quote--not sure who to attribute it to: "SOME HORSES COME INTO OUR LIVES AND QUICKLY GO. OTHERS STAY A WHILE, MAKE HOOFPRINTS ON OUR HEART, AND WE ARE NEVER, NEVER THE SAME."

It sounds like you have a wonderful mare. I left you a comment on Laura's previous entry about my hosres situation.

Good luck with all you wish to accomplish with your mare.

wow~ the photo looks great.
I am a new fan of your blog. Hope you can join my free horse lovers club RiderMate.com. It is very active now.

Beautiful post and I know what you are talking about... love those days when it all comes together. Nothing like it in all the world. She is beautiful and lucky that you are the one to love her!

Yes, Gailey has left footprints on my heart. She is my once-in-a-lifetime horse.

Monica, I hope you can get your feet in the stirrups more often this year.

She is a wonderful mare. I debate on whether or not to try to breed her, yet I hesitate because I've had two friends lose mares in the past year in foaling/breeding situations.

I'm glad you found us. Your website looks great. I referred my single friend to it. She'd love to find a guy into horses.

I'm not sure if she's the lucky one or if I am. Or maybe we both are. I know there aren't a lot of people who would tolerate what I went through to get her to haul.

You could always do an embryo transfer. Much more expenseive, but you wouldn't have to worry about losing you mare. And you wouldn't lose any riding/training time either.

I have considered that. I may still do it. We'll just have to see how things go.

Thanks for the suggestion.