Book News and the Story of a Good Horse

First of all, I want to let all Equestrian Ink readers know that the first eight books in my mystery series featuring equine veterinarian Gail McCarthy are currently available for 99 cents on Kindle. In October, the pricing structure is going to change, so now is the time to buy these books, if you are at all interested. If you don’t have a Kindle you can download the free Kindle app and read the books on almost any sort of device. For those who have the Nook, I have been told that there is a free program for the computer called “Calibre” which will convert just about any ebook format and transfer it to the Nook. And thank you to my readers who told me about these options (!)
So, loyal readers, here’s your chance to get the first eight books in my mystery series for 99 cents each. The order is Cutter, Hoofprints, Roughstock, Roped, Slickrock, Breakaway, Hayburner and Forged. Each book deals with a different aspect of the western horse world—and all of them are based on things that I have actually done, so, hopefully, they have the ring of reality. And, of course, they all involve a gripping mystery. I know most people like to read a series in order, but I am often asked to recommend my favorite book—or asked which is the best. I would have to say that the overall reader favorite is Slickrock, which is set on a horse packing trip in the Sierra Nevada Mountains. Second favorite is probably Breakaway, a darker book, involving a woman struggling with depression and a very nasty sort of villain. Lots of trail riding in this book, too. I like both of these books very much. Anyway, here is the link to buy the books on Kindle. If you are considering these books, now is the time to get them while they are still 99 cents.
Also, I just joined Goodreads since so many people have told me I should do this, but I have not got a clue how to use this site to promote my books. Can anybody give me some suggestions?
And now, without further ado, the story of a good horse.

Once upon a time, about twenty-three years ago, a six year old buckskin mare gave birth to her first colt. The mare belonged to my uncle, and as it happened, I saw this colt shortly after he was born. He was a pretty colt, cocoa-colored with a white star on his forehead. As he was by the sire, Plumb Dry, and my uncle named all his colts “Something” Brown (as in Bright Brown, Noble Brown, Ready Brown..etc, my uncle’s last name being Brown), the colt’s name became “Plumb Brown”, which was kind of cute, because he WAS brown.
The colt himself was very cute, with a winning personality. When I would walk out in the pasture to feed the mare her grain, the colt would peer at me from behind his mother, and then come out and duck and dive at me playfully, like a cutting horse working a cow. Plumber was always a people horse, interested in everything the humans around him were doing. Despite the fact that my uncle raised Quarter Horses and so I had seen many cute colts over the years, I always thought Plumber was special. 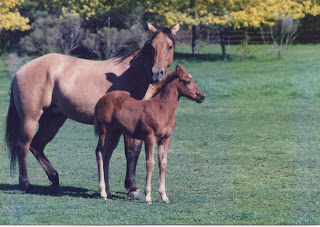 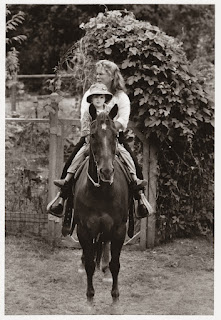 I still have Plumber today. We retired him from roping at 20, because he didn’t want to run any more. He had been a competitive heel horse since he was nine years old, so he had a good long career. We also rode him on many trail rides and horse packing trips in the mountains. I thought I would use him as a trail horse once we retired him from roping, because he was/is still sound, but he made it clear he did not care for walking downhill, and since all our trails are hilly, I honored his wishes and bought Sunny for trail riding. Plumber seems happy just being turned loose to graze and getting his share of attention. 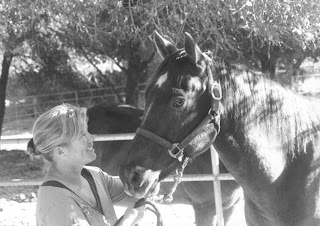 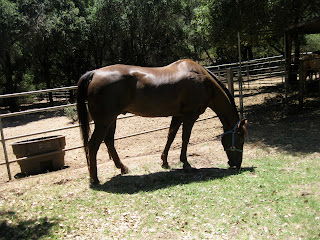 So there’s one story of a good horse. I know we can all tell them. But I feel very blessed to have had Plumber in my life and wanted to share his true story. Those of you who read my mysteries will find Plumber featured prominently—only the storybook Plumber is a touch more athletic than the real horse. But every bit as sweet. One of my greatest pleasures in my twenty years of writing mysteries has been conveying my real life horses on the page—always as realistically as I can. Those of you who have read my books—feel free to let me know how I did. And yes, I can take criticism as well as praise. I find it always teaches me something.

What a lovely story about a great horse - you are indeed fortunate to have found each other.

Thanks, Kate. Like you, I am very grateful for the good horses that have come my way, and how they always seemed to provide, each in his own special way, the very thing I needed at the time.

LOL, poor Wally - does he ever get to be right? ;) Plumber sounds like such a sweetheart. He's a good horse through and through.

Funder--One of my chief pleasures is proving Wally wrong(!) You can't imagine how satisfying it is to be right when I am arguing with someone who basically raised me in the horse world. And these old cowboys are so sure they know what's what. And Wally really is great with a horse and has taught me a lot. But yeah, I rub it in about Plumber ALL the time. Plumber is as attached to Wally as he is to me, by the way. I consider him to belong to both of us, as does Wally.

What a wonderful story about a neat horse--and good stick-to-it on your part!

I will make sure I've downloaded the rest of your books to my Kindle, too. Cutter was great--reminds me of what some good friends of ours said about all the politics. :)

Jessica--Much of Cutter was drawn from my real life experiences showing cutting horses and working for cutting horse trainers. I did make up the plot, but the characters are, believe it or not, pretty much straight from life.

Thanks so much for your comment. Glad you enjoyed Cutter.

What a lovely story, Laura:) You knew instinctively that he needed time, and your patience paid off. I'd never heard of a heel horse, still not sure what that is! It sounds cute to me, like a horse following on your heels (like a dog), but I guess that's not what it is!!! Although it also sounds like Plumber followed you around like a dog :)

Cesca--Plumber did and does, follow me around--also "talks" to me constantly. A heel horse is used in team roping. One rider ropes the steer around the horns and "turns" him and the other rider ropes the two back feet--the heels. This event comes from the need to doctor cattle on the open range, where there were no corrals. Once the steer is caught in this way the cowboys could doctor him as needed.

I love horses like Plumber. He's a sweet loving horse and showed everyone he could do the job. I'm so happy he's still with you and enjoying his retirement. Great story about a great horse.

Great story and photos. You must have a terrific memory--I can barely remember my name sometimes, much less think back to all my horses. Old age, what a pain.

Alison--The one thing I do remember is horses. Everything else, including the titles of books I have loved, escapes me.

Laura, you make me laugh: I can never remember book titles and I'm a *librarian*!

I can't remember people very well, either. Names elude me. People names, that is--I rarely forget a dog or a horse, even after many years.

And BTW, one of the reason that Fiddle and her siblings flunked off the pacing track is that they were almost all complete klutzes until they turned 7 years old AND STOPPED GROWING. As soon as Fee (and her younger brother, who was known on the track as the "Crash Test Dummy") were living in bodies that didn't change size all the time, they got more graceful. But nearly all of that stallion's get continues to grow until age 7 or 7.5!

Aarene-- I have known horses that grew until they were eight. Grew both taller and deeper through the cinch. It is amazing how many people don't realize that some horses do grow past five years old. Unfortunately, Plumber, though he got to be LESS of a klutz as he got older, never became a very athletic horse. But that's OK, he was/is still a good horse by anybody's definition. There are several saddles in the barn that he won, he never once dumped his rider, and he was/is much loved by those who owned/rode/handled him. What more is there to ask?

I loved this story. You should frame the picture of you and your son on Plumber. It is a gorgeous way to capture the essence of a great horse.

Thank you, Val! I love that photo of Plumber packing me and my son, and have an 8 by 10 of it. But the one I framed and put up shows us loping along with a grin on my son's face a mile wide. He loved loping with me on Plumber. Unfortunately I was afraid to put that one up on the blog. It would probably get me turned into fugly as a bad parent (!)

Kate hit the nail on the head. Lovely story about a great horse. These stories are so inspiring for any would-be riders and breeders, I have a weakness for Anything Equine and these anecdotes compound my love!