I Know, No Posts

Once again, my apologies to those who liked to read my blog posts. My life has just been so busy lately. Many new projects, much change-- very engaging, but no time to write.

But magic is real. I’ve written about this so many times—I don’t really have any new words for you. Watching the almost full moon rise behind the big eucalyptus tree on a gloriously warm September evening, my heart is full. It amazes me that after all I have been through I can feel this way as I look at the moon. Or perhaps it is because of all I have been through?

In any case I sit by my pond and drink whiskey and soda in the evening, watching dragonflies and the light change in the sky, and feel content. And I'm grateful for that. 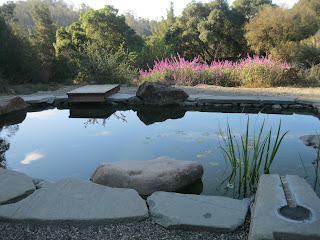 On a warm, moonless night I sat by the pond and watched Orion rise above the eastern ridge and stride across the dark three AM sky. Twice I saw shooting stars. And yes, I wished.

A friend gave me a lovely book—“Tamalpais Walking”—a collaboration between the woodblock print artist Tom Killion (I have several of his prints here on my walls) and the poet Gary Snyder. I highly recommend this book. And I’m going to close this brief blog post with some quotes from the book that touched me. Most of them are by Gary Snyder.

“Not even once,” someone said, “can you step in the same river.” Landscape with nuance.

Every night the drama will have new turns and meanings. One who learns this will never be bored.

Nature, not in the abstract, but (like anybody) a kind of being actually there to respond to being seen in the moment. Gratitude to the particular is never in vain. Relationship to place is real, not as an idea but as a way.

“All paths lead nowhere, so choose a path with heart.” Don Juan

“A way that can be followed is not the ultimate way.”

We don’t play music to get to the end of it. Or make love to go to sleep (I hope). Or meditate and study to become enlightened. Realization or somesuch might come along, but suppose it doesn’t? So what? Basho said, “The journey is home.”

May we all find the Bay Mountain that gives us a crystal moment of being and a breath of the sky, and only asks us to hold the whole world dear.

Of course, I'm talking about opinions. It's been almost 3 weeks since we've moved to our new stables. I think the move went pretty well. It was a lot of work, and I would have liked to have left with better feelings from the owner of the previous place - we were (and hope still are!) friends, but the last day was filled with tension.


We're still finding our way around the new place. Everyone is very friendly and accommodating, willing to show us where things are, take turns for the turnouts and round pen, etc. I love the arena. The footing is a combination of sand and synthetic that is very soft and springy. Very good on Snoopy's legs. 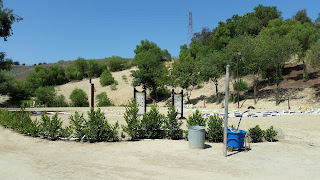 Speaking of Snoopy, he's not as happy with the new place as I thought he'd be. Where Frostie settled into her stall without complaint (and is already growing to fat-as-a-tick status on the new diet), he has not quite accepted the fact that he's in a new home. He's eating a lot of hay, plus senior feed, but the first week, he paced so much in his stall that he lost significant weight. Any time another horse is taken out of the barn, he screams until they come back, and sometimes, he rushes his stall door so frantically that we close the top, afraid he'll try to jump out.


This is not normal behavior for him. (Even at shows, he is calm after his first lunge.)


The best we can reason is that he knows he's not at a show, but he can still smell/hear/sense his old home nearby (it's two doors down), so he is confused about just where he is. Some days he acts like he's settling. Then a horse leaves the cross-ties and he screams and rears and generally behaves like a loon.

This week, we called the vet to try to see what to do. The weight loss isn't good for him, as I'm sure the stress is getting to his stomach. The vet gave him a shot of a hormone designed to relax him within a week, and last for a few months, plus some pills to counteract the excess acid in his stomach. It's only been one day, but he seems to be a little quieter.

Of course, it could be because his favorite vet, Dr. Brigid Murphy came to visit. She told him that he's going to live here and it's okay because she knows where to find him, and she'll tell Santa where he is. The entire time she's talking to him, she's feeding him apple treats.

I told her I tried to tell him, but he didn't want to listen. Maybe he listened to her.


Have any of you had a horse that just wouldn't settle into their new place? What did you do to ease their anxiety?

Posted by Gayle Carline at 12:00 AM No comments:

by Natalie Keller Reinert
At last, a reason to blog! I posted over at nataliekreinert.com for the first time since spring, and now I'm going to share it over here with all you fine Equestrian Ink readers, because good news! A new book!
It's been a long, hot summer, readers -- or has it? I've been working so much this summer, it went flying by like one of those particularly deranged dragonflies that goes right past your nose and scares you to death and you shriek and wave your hands in your face and everyone turns around and stares at you and you say "did you SEE that thing?" but nobody did...
Oh wait, that was me the other night at work.
I'm telling you, that thing was HUGE.
Anyway, it's been busy. Working at Walt Disney World by day (well, really, by night) and working at my computer by night (usually by day). It's a wonderful balance, when it works -- working at Disney lets me get out from behind a screen and chatter with people from all around the world, and working at my computer lets my voice (and my brain) recover from eight hours of all that chattering.
It's great, but summertime can be challenging at one of the world's most popular vacation destinations... long hours, late nights, and a newly rediscovered penchant for sleeping until 11 AM can all take their toll on one's writing goals.
However, I set myself a goal of finishing Show Barn Blues by the end of August, and I'm happy to announce that I've achieved that goal! Fully edited and ready to go, all we need now is the final cover design and internal formatting, and we will have ourselves a new novel!
I'm excited to bring you this story, which has some characters and horses I just love, including Grace Carter (her name might be different in previous blog posts, this has been a long process), who is a been-there-done-that barn owner; her sassy gray stallion, Ivor; a former dinner show/hunter princess named Kennedy; and a cast of grooms, working students, and boarders who keep life interesting.
One challenge that I'm having with Show Barn Blues -- how to categorize it on Amazon. You might notice that on Amazon, the books in a series will show up on the same page. Look at Turning For Home's page and you'll see the other novels in the Alex and Alexander series right on the page, listed numerically. Nice, right?
Well, Show Barn Blues is technically part of the Eventing Series, which begins with Ambition. The Eventing Series was plotted out as a trilogy, and the next novel, Pride, will follow Ambition. So that's logically Book 2.
However, we're going to meet the characters from Show Barn Blues in Pride. They're important to the story. They just don't fit into the trilogy. They're like a bonus novel. Does that make Show Barn Blues "a novel of the Eventing Series," perhaps?
It's a shame that Amazon doesn't allow "1.5" as a volume number, because I would just use that -- but I've already tried that particular scheme before and it doesn't work.
Other than that conundrum, the writing life is good. I have all the tools I need for my final draft of Pride. Barring work insanity, I should have the next Jules novel to you by the end of the year. I'm rereading Ambition to make sure I have her snotty voice in my head, although Jules is softening... a little. She's still prickly, but life with Pete is starting to sand down those rough edges... a little.
Maybe it shouldn't take me two years to bring out the sequel to a book as popular as Ambition, but it really does take me that long to write a book. I found notes the other day for Turning For Home, and they were dated 2013. I released TFH in 2015, so there you have it -- that's just the way I write!
So get ready for Show Barn Blues. I'll have it out for you soon!
Posted by Natalie Keller Reinert at 5:03 PM 2 comments: