I just got back from vacation last week and was very happy to be reunited with my horses again. Almost the first thing I did on getting home was walk down to the barnyard and have a look at the four equines living in the corrals there—our current saddle horses. All looked as if they had weathered my absence nicely—a real relief. As always, my gaze eventually went to the large rock in the biggest corral, which marks the grave of what was argueably the best horse I ever owned, or more accurately, was partners on. Now Flanigan doesn’t appear by name in my mystery series featuring equine veterinarian Gail McCarthy, but he lends his abilities, personality, exploits and tribulations to several horses in the course of my ten books, and since he’s been on my mind lately, I’d like to tell his story here.

Flanigan was a team roping horse, and a good one, which was how he came into my life. At that time, I was competing at ropings on my horse, Gunner, and my team roping partner purchased Flanigan from a well-known rope horse trader for a fair chuunk of change. When Gunner started to suffer from sore hocks and I decided to quit roping on him, my partner offered to sell me a share in Flanigan, so that I’d still have a mount for the ropings.

I was doubtful. The horse trader had informed us that Flanigan’s previous owner had been so afraid of the horse that he’d attempted to starve the animal into submission; it had taken the horse trader six months to feed the horse back up to a normal weight. Flanigan was cinchy, and if a certain careful protocol was not followed with his saddling and warm-up, he would buck. He’d bucked my partner off several times and I wasn’t eager to be the next victim. Nevertheless, my partner insisted that Flanigan was a “babysitter.”

This seemed like somewhat of a paradox to me, as I’m sure you can imagine. Neither did Flanigan attract me, as some horses in my past had done. Plain, brownish bay with a little white, Flanigan pinned his ears in a grouchy way whenever one looked at him, and he did not have a particularly “pretty” way of moving or working. In short, on the surface there didn’t seem to be much to recommend him. Nonetheless, I tried him.

The horse amazed me. If you’ve ever had the experience of a mount who would really pick you up and carry you, who attended to his job without needing much if any help, leaving you free to concentrate on your end, then you know what I mean. I saw instantly what my partner had meant by telling me the horse was a babysitter. 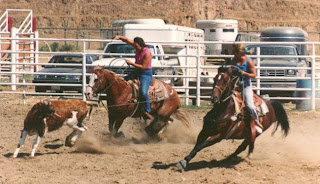 I bought a half share in Flanigan and roped on him for many years. In the photo above I am turning a steer for my good friend Sue Crocker, who is heeling on Pistol (who also appears in my mystery series as an equine “character”). I mastered the art of Flanigan’s warm-up program, and though he crowhopped with me occasionally on the first run of the day (something he would do right up until the time he was retired), he never bucked me off. I also rode this horse on numerous pack trips through the rocky Sierra Nevada Mts of California, where he proved to be just as reliable as he was in the roping arena. Flanigan and I traversed many tricky trails together over those years (including some spots that brought other horses and riders to grief), and I will be eternally grateful for his calm and responsive reactions, as well as his strength and surefootedness. Our travels in the mountains form the basis of my fifth book, Slickrock, and though the mount Gail rides in the story is Gunner, the horse who crossed those passes with me in real life was Flanigan.

Flanigan had other virtues, too. He would work a cow as well as a well-trained stock horse; he would pack an outright beginner and/or a small child willingly and calmly; he won many dollars and numerous trophy saddles and buckles as a competitive team roping horse. For me, though, the thing that mattered the most was the incredible “feel” I got from Flanigan. An immensely strong, intelligent, self-assured and capable horse, he made me feel safe and centered, whether we were traversing slickrock passes in the mountains or charging at full speed down the arena after a steer. Flanigan was one of those horses who simply would not fall down. Didn’t matter if a cow turned right in front of him at a dead run or a foot slipped as he followed a narrow crack in the granite---the horse stayed up.

I grew to love Flanigan as much as I’ve ever loved any horse; I understood his grouchy behaviors and saw through them to the great heart inside. I nursed him through many bouts with colic, which he was prone to, and made sure that he spent long periods of time turned out in my sixty-acre pasture getting some well-deserved R and R. When my baby was six months old, the horse I chose to take my child on his first ride was Flanigan.

Sadly, though Flanigan stayed sound and usable until he was twenty-one, at some point that year while he was turned out in the pasture, he suffered an injury (we never knew what happened) that resulted in a diaphragmatic hernia (diagnosed through ultra-sound at a major equine veterinary center). From this point on, he could only walk about the pasture. Moving faster than the walk caused him to gasp for air. (More about this in my novel, Moonblind.)

We kept Flanigan for another year, and he was able to enjoy a reasonably pleasant season in the pasture, but eventually he came down with a severe colic which wasn’t responsive to drugs. Since surgery was impossible due to his condition, we chose to put him down rather than let him suffer. He is buried here on my small horse ranch and every time I look at the stone that marks his grave I remember him, and what a magical horse he was for me, enabling me to do many things I didn’t think I was capable of. I will always be grateful to him.

I still miss Flanigan, even though I lost him some years ago, but I feel his spirit stays with me—a protective guide. I’m sure that others who have lost beloved horses will understand.
Cheers—to Flanigan 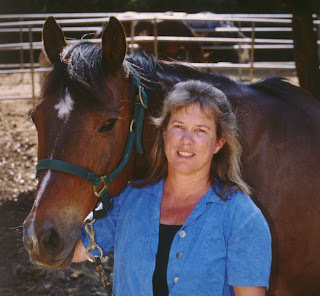 A beautiful tribute to Flanigan. I think we all hope to have that kind of horse partner share our lives. Interesting that at first, you really didn't see anything particularly special about him, yet as the bond developed, you two learned to understand each other. I enjoyed reading Chasing Cans, just finished it. I'm planning to look into your earlier titles too. Thanks for sharing how your own horses become models for those in your books.

Thanks for the nice comment. Flanigan was an amazing horse--my little piece doesn't really do him justice. I'll always be grateful to him.

I think your piece was a wonderful and loving tribute. One of the fun things about reading your blog, and your books, is trying to fit the horses in your stories with the "real" horses in your life.

Laura, I am SO HAPPY to have come across your name in mugwumps' blog comments cuz I read an excerpt from one of your books years ago and was never able to recall who wrote it. Drove me crazy cuz I really wanted to read the entire book - think it was "Roped". On to Amazon!

Thank you mugwump and One Red Horse. I look forward to your reviewing my books, mugwump. Like the rest of your blog readers, I think you are a wonderful writer, so will value your opinion highly. I'm glad you liked Cutter, and hope you enjoy the rest of the series. One Red Horse, please do let me know what you think of my mysteries. I appreciate reader feedback. Time to get to work on book #11--yes, mugwump, I'm still procrastinating.

Fantastic tribute Laura! Flanigan sounds like an incredible horse- glad he got to stay with you for a very long time, and be with you still.

And welcome back from vacation. We missed you round here! ;)