Well, I made it. Never Trust A Matchmaking Witch was released yesterday and I'm still standing (I think). Now it's the nail biting wait for reviews and sales figures! Unfortunately, I've been biting into much more than my nails, as my bathroom scale attests. I've been telling myself (ahem) I needed the sugar to keep going since I don't drink caffeine. As excuses go, I thought that was a pretty good one!

I've gotten good feedback on the book so far. The idea of a paranormal romantic comedy appeals to people in these uncertain times, as does the $2.99 price tag for the ebook. Of course, in my mind, the equestrian setting is perfect for a lighthearted romance since so many of my happiest memories involve horses.

As part of the promotion for Never Trust A Matchmaking Witch I'm participating in a Holiday Tour of Author Websites that Writerspace (www.writerspace.com) is hosting. When it came to decorating my site, there was only one picture that leapt to mind.

Among the many wonderful aspects of my years with Topper and Spencer was enjoying taking photos of them. I want to share this one with you in the spirit of the holiday season and in remembrance of two of my very best friends: 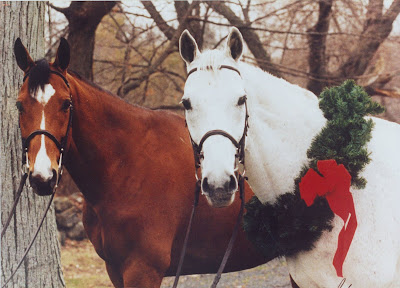 I also want to share a brief excerpt from Never Trust A Matchmaking Witch. Hope you enjoy it!

Susan stopped in front of Misty’s stall and arched slowly with a hand to the small of her back, feeling her sore muscles stretch. Just this one last stall to clean and she’d be done.

“How’s it going?” Brad’s huge bay hunter enthusiastically crunched a carrot Brad was poking through the bars of its stall. The powerful, athletic horse made a fitting pair with the tall, rugged-looking man in boots and britches, a thick quilted vest zipped over his expensive sweater.

His hazel eyes glinted at the view of her stretching her body in a gentle arch. She snapped to attention, tugging her sweatshirt down. She could have jumped in the shower, but, oh, no, she had to be practical. She felt grubbier than ever next to the handsome surgeon waiting for her to reply.

“Fine, thanks.” She stuck her chin in the air and tugged on the stall door, which of course was stuck.

“Here. Let me help you with that.” In a moment Brad was beside her, sliding open the door with ease then pulling her pitchfork and bucket in.

“No problem.” He grinned over his shoulder at her. “I’m used to it.”

“You clean stalls?” Susan blurted incredulous and then bit her lip.

“Well, not lately, but as a kid I did plenty of them. Want some help?”

“Alicia’s working her and Ritchie over a gymnastic. She loves it.”

“A gymnastic? Isn’t that the wrong sport?”

“Not in this case.” He laughed, and she noticed deep creases by the sides of his mouth. He was too manly by far to have dimples. “Come look,” he added.

He placed a hand at the small of her back to urge her forward and a warm tingle flowed through her core and down her arms. Just a common courtesy, Susan told herself. She preceded him through the wide doorway to the indoor riding arena.

Together, they climbed the bleachers that lined one side and were separated from the riding area by a low wall.

Susan cast about for something to say and her eyes lit on the ceramic owls set in the rafters in the four corners of the barn. “Interesting decoration.”

“Those.” Susan pointed at the nearest owl.

Looking where she indicated, Brad said, “Ah, those aren’t decoration.”

“They’re not?” Susan frowned at them.

“Nope. The plan is to scare other birds out of here.”

“Why would we want to do that?”

“Well, cleaning up after them isn’t a fun job.”

“Oh.” Knowing the odds of her being the one doing the cleaning, Susan looked back with gratitude at the owls, then blinked. They had moved. Hadn’t they? They were in the center of each wall instead of the corners.

“Is anything wrong?” Brad was looking at her closely.

“No. Nothing.” Susan looked again. The owls were in the corners of the barn. I really have been working too hard, Susan thought. She glanced at the owls again, and one winked at her.

“Are you sure you’re okay?” His arm came around her.

“Fine. Thanks. Um...do those owls have any moving parts?”

“I don’t think so.” Brad frowned at the owls.

“I just thought, you know, to scare the birds, they might have them move or something.”

“I’ve never heard of it, but good idea, though.” Brad grinned at her. “You should send the idea in to a horse magazine. Barn owners everywhere would be thanking you.”

“I’ll think about it.” Susan smiled back at him, forgetting the owls as she got lost in his warm hazel eyes. She must have just imagined the wink.

“See those?” His thigh brushed hers as he leaned forward to point toward the center of the ring.

Susan nodded, noting Jen astride the trotting Ritchie before looking to the area he indicated. Three jumps, in relatively close succession, were set up down the far side of the ring. The first was a cross-rail fence Jen was used to jumping, followed by a straight rail that looked a little larger than what she was used to. It was the height of the last fence which had Susan sitting forward in alarm. “Jen’s not going to jump those three, is she?”

“Sure. That’s the gymnastic.”

Susan stared at Brad, all inhibitions lost. “How high is that last fence?”

“What!” Susan jumped off the bench. “Jen’s never jumped that height before.”

“Relax, Susan. She’ll be fine.” Brad tugged her back down on the bench beside him. “Alicia knows what she’s doing. That’s the whole purpose of a gymnastic. The horse is set up correctly to jump so the rider can focus on her balance and strength over fences.”

“What if she loses her balance?” Susan’s small fingers gripped her knee.

“She’ll be fine. Alicia has the jumps spaced to be easy for Ritchie. This way, Jen can focus on her position. Watch.” Gently, Brad pried Susan’s fingers off her leg and held them loosely in his hand. Even through her agitation, Susan’s body reacted to his touch, and she glanced down at their joined hands before Alicia’s voice jerked her attention back to the drama at hand.

“Okay, Jen. One more time. Remember, don’t jump up his neck. Weight in your heels as you close. Let him come up to you over the top of the fence. Ritchie, slow and gentle for her now.”

“Does she always give instructions to the horse as well as the rider?” Susan wondered aloud.

“Not generally, but Alicia and Ritchie have been together so many years, I swear sometimes he understands her every word. Watch.”

Happy Holidays, Everybody and Happy Reading!

I loved the photo. What sweet looking horses. You can tell they're both good guys.

Thanks for the compliments on Never Trust A Matchmaking Witch. I hope you enjoy it!

Thanks, Laura, for your compliment on Spencer & Topper's picture. I really miss them, especially at Christmas!

That is a wonderful picture of Spencer and Topper, so Christmasy!

Good read- can't wait for the release of the Matchmaking Witch book.