Well, I pulled out the decorations for Christmas and found Spencer and Topper’s stockings with the rest. This will be my first holiday without a horse in my life in more years than I can remember. I just had to put their stockings up, so they’re in a place of honor in a light display on our screened porch. I won’t be shopping at Beval’s this year, but I’m picturing them up in heaven with an endless supply of Mrs. Pastures Cookies, warm oatmeal cookies and a nice holiday platter of apples and carrots.

My family, animal loves all, still found a way to incorporate them into our holiday celebrations. We took the kids to Breakfast with Santa at the zoo. They had a blast with costumed characters dressed up as zoo animals and, of course, they sat on Santa’s lap. My daughter was there for quite a while having an intimate chat with the gentleman. She had a long list for him.

We were there the first day they started a new program. They allowed the penguins to walk on the sidewalk among the zoo visitors. How Chrstmasy, right? My daughter, son and I were right up close for this and they waddled right by us. Unfortunately my son turned around just as a curious penguin was right in front of us. Apparently, the sight of his backside was an appealing target for the penguin, who walked right over, grabbed hold of the seat of my son’s pants with his beak and held on!

My daughter, mindful of the zoo keepers earlier warning that penguin’s poop tends to be projectile, lifted the sneaker nearest the penguin as high as possible. Now she will walk through a stall that hasn’t been mucked yet without a second thought, but apparently penguins is where she draws the line.

Perhaps it was her resemblance to a stork and the penguin just wanted to say hello to another bird species, but the penguin disengaged from my son’s derriere and started nibbling on the bottom of her sneaker while she held it aloft. She was doing some interesting balletic movements that entertained both the penguin and the crowd quite a bit. My verbal coaxing was of absolutely no interest to our penguin friend whatsoever. Fortunately, a keeper reached us and retrieved said penguin, saving me from having to pluck the little fellow off my daughter.

My husband, who stayed with our other son and the stroller at the edge of the crowd said he knew when her heard the uproar of laughter from the crowd it had to have something to do with us. Hmmm. He mentioned later that he and our safely strollered son did observe the penguins without the up close and personal experience the rest of us had. They did join the crowd in being entertained by the three of us. As a matter of fact, here’s a picture of my son (the one who escaped the personal penguin interaction) with one of his usual Christmas laughs. 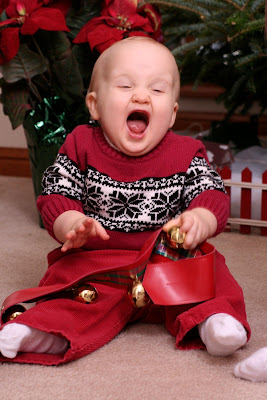 Happy Holidays from the Paine family. Best wishes for a safe and joyous New Year!

Merry Christmas, Mary...and where is your camera when you need one??? Those would have been such awesome pictures..the kids and the penguin. :-)

First of all, I'm here from LASR.

Change is hard, isn't it?

Merry Christmas to you and your family as well, Mary!

Being part of LASR, and a horse lover for years I know your pain...I've had too many christmases without my horses.

The peguin debalical sounds like a real hoot or chirp - whatver sound they make. hehe.

Happy Holidays! I liked your story today. I would love to walk about with penguins except for that whole spraying out the back end thing. That I could do without. And like JennyKat said, where are the pictures of this scene???

Thank you, everybody, for the support. I'm getting used to being without Spencer & Topper. Besides, I have three beautiful children to make sure Christmas at our house is joyous.

I wish I had pictures of the penguin escapade. Perhaps I'll write it into a story so the memory stays with me. ; )