It seems like we're on a dressage kick, here at EI. The following text consists of the rest of my notes taken during a clinic given by Michael Barisone in 1995. I had the privilege of not only listening to Michael teach but of watching him ride his beloved horse, Comanche, during the lunch break.

Michael Barisone has been a part of the American Dressage scene from the USDF Junior/Young Rider ranks winning his USDF Bronze, Silver, and Gold Medals. But it was with Comanche the white faced KWPN Dutch Warmblood gelding by Naturel, that he rose to true prominence and became international team material. Since 1991 when they finished six overall and qualified as second alternate for the Pan American Games, Barisone and "Chuck" never missed the USET top 12. As a member of the 1998 USET Developing Rider Tour, they were the "clinch" ride that won the Team Gold Medal at the Nations Cup in Hickstead, England. Sadly "Chuck", who had developed serious health problems shortly after he returned to America, did not survive, despite a valiant effort to save him. 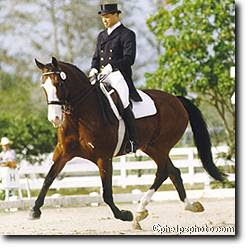 Watching Michael and Comanche go through their paces was an eye-opener. The horse was magnificent and performed beautifully, listening to aids that were mostly invisible. The key point I came away with was that, through consistent aids, repetition, and skilled riding, you can teach the horse to respond to the lightest aid.

More Fine Points from the clinic:
When the horse acts up or backs off, stretch up and put the leg on more. When in trouble always use the leg. When the horse lifts his head up and hits the bit, slide the bit left, right, left, right, but don’t move the horse’s head left, right, just the bit. When a horse won’t take the contact on one rein, take on both reins and go forward, then it should take care of itself. Take/give, always give. Do lots of transitions within the gait to get the horse’s attention and focus. Do a little shoulder-in and counter bending to get soft. An open hand is a hard hand. A closed hand is a soft hand. Leave your hands’ connection with the reins firm, but when you soften, you soften with the wrists, elbows, and shoulders. Set up everything you do so that it will work. Ride the short side as a straight line. Take time to plot your path, and make the horse stick to it. This is good practice and training for the horse. Keep thumbs up, look up. Keep arms soft and elastic, with constant contact, like draw reins. In the trot, ride forward from the leg. In the canter, ride forward from the leg and seat. 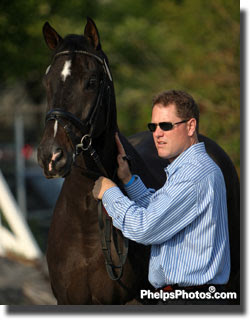 Leg Yielding
When leg yielding, the inside leg pushes the horse out to the rail, keep both hands to the inside to slow the forehand. The forehand usually speeds up and gets ahead of the haunches in the leg yield, which you don’t want. Sponge the inside rein to keep the horse soft.

Ten-Meter Circle
In the ten-meter circle, or any circle, the hands move to the inside to guide the forehand around, while the inside leg is on. Sponge the inside rein.

Half halts
Half halts are a crock. You teach a green horse to go forward from the leg and to stop from the hand, then all of the sudden, in a half halt, you try to tell him to stop and go at the same time. What is that? When you use the leg, you must allow him to go somewhere.

The Double Bridle
The curb rein goes where snaffle rein usually goes, and snaffle rein goes between next fingers towards the thumb. When you want to flex longitudinally, use the leg first, then the curb (both reins always) by rotating the hands so that the curb comes into effect. Then give. Leg, curb, give, leg, curb, give, leg, curb, give. Eventually the horse will give in his jaw and pole when you apply the leg because he knows what’s coming next, so he “gives from the leg” and you don’t even need to touch the curb.

Canter Pirouette
From the diagonal, aim for the corner, keep inner leg ahead (at girth), outer leg back, reins to inside. In the pirouette ride the neck down with a soft inner rein. Approach in shoulder fore so horse is already bent, outside leg touches with the spur on every stride in pirouette. Move outside rein out to slow pirouette, move outside rein against neck to speed up the pirouette.

High Tense Horse
If you’re riding a high horse who lacks focus, never stay in one thing too long. Always keep them guessing. Do lots of transitions within the gait. Don’t stretch too low with reins too long because you can’t trust the horse. If the neck comes up, use your inner leg, vibrate inner rein, flex rein, but always give. Don’t hold the horse’s mouth. Do lots of figures. When the horse is tense, do everything you can to loosen the back. Move the horse in and out like an accordion to loosen back.

Sitting the Trot
Don’t worry about more trot when you’re trying to learn to sit the trot. Build the trot a little at a time as you become more comfortable.

Another video of Michael riding Neruda.

One last note that is not horse-related, but if you like reading mysteries, Bouchercon, the World Mystery Convention is coming to Indianapolis this October.

My favorite is the ideas for riding a high tense horse....

I like that too - keep them guessing and, therefore, concentrating on the rider instead of imagined boogie monsters behind the arena fence.
Kit

Half halts are a crock? That's interesting. And unique if true. Every really good rider I've ever watched / talked to / read / ridden for used half halts, even if they didn't call them that. Did you have any more notes on that?

Sorry I've taken so long to reply. Unfortunately, I don't have any more notes on Michael's dislike of half-halts.
Kit