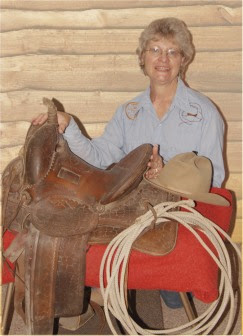 I'm very happy to introduce Heidi Thomas, who has made Equestrian Ink one of her stops on her blog tour.

Please leave a comment of substance to be entered in a drawing from today’s blog stop. Check back tomorrow to see who the winner is, give us your mailing address and wait for your prize!

Cowgirls Compete With Men
A petite young woman mounts a 750 to 900-pound steer, and hangs on to nothing but a rope tight-wrapped around one hand. That she stays on this bucking, twisting, snorting beast for ten seconds, eight seconds or even two seconds, seems a miracle.
This is the intriguing picture of my grandmother I have carried in the back of my mind since I was a little girl. 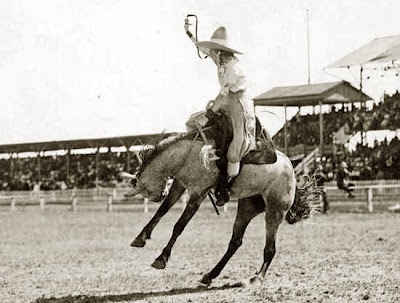 My grandmother, Olive May “Tootsie” Bailey, grew up the daughter of homesteaders during the early 1900s in the Sunburst-Cut Bank area of Montana, near the Canadian border and east of the Rocky Mountains.

Although she no longer rode in rodeos when I came along, “Gramma” was an avid horsewoman and ranch wife, equally at-home on the back of a horse as she was in a dress and heels. She and my grandfather, Otto Gasser, were partners in rural Montana ranching as well as an urban family of friends.
The 1920s were the heyday of rodeo, where the cowgirl was as much a part of the festivities as the cowboy. The first cowgirls learned to ride out of necessity to help on their family ranches. At an early age they learned to ride horses, rope cattle, and stay in the saddle atop an untamed bucking bronco.
In 1885, Annie Oakley, a diminutive sharpshooter in Buffalo Bill Cody’s Wild West Show, paved the way for other women to be recognized in the rodeo arena.
Two years later, Bertha Kaelpernick was allowed to enter a horse race in Cheyenne’s Frontier Days only because the arena was so muddy the cowboys refused to participate. To entertain the crowd, she was coerced into riding a bucking horse. 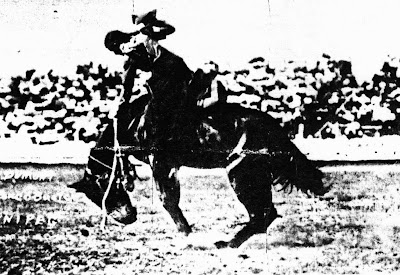 Despite the terrible conditions, she managed to stay in the saddle, and put the men to shame. She continued to compete and often beat such legendary cowboys as Ben Corbett and Hoot Gibson.

Following in Bertha’s footsteps years later, Prairie Rose Henderson of Wyoming forced the Cheyenne organizers to allow her to ride. She went on to become one of the most flamboyant cowgirls of the era, dressing in bright colors, sequins and ostrich plumes over bloomers.
Lucille Mulhall, whose father, Colonel Zack Mulhall, ran a Wild West Show, was described in a 1900 New York World article as “only ninety pounds, can break a bronc, lasso and brand a steer, and shoot a coyote at 500 yards. She can also play Chopin, quote Browning, and make mayonnaise.” Both Teddy Roosevelt and Will Rogers have been credited with giving Lucille the title “cowgirl.”
Between 1885 and 1935, many women proudly wore that title and competed with men, riding broncs, steers and bulls. They also roped and tied steers (usually wearing long divided skirts) alongside their male counterparts.
In early rodeos, women and men competed in the same arena, drawing from the same stock. Women rode broncs, steers, bulls, and did steer roping as well as trick riding, Roman races and relay races.

I know that my grandmother, Toots Bailey Gasser, rode steers in small Montana rodeos. Other cowgirls, such as Marie Gibson, also from Montana, rode steers, bulls and broncs throughout the US, Canada and even London. While each cowgirl had her specialty, most participated in multiple events.
Vera McGinnis, Tad Lucas and Fox Hastings were probably best known for trick riding. This demonstrated numerous types of stands and vaults, performed while the horse was galloping at top speed. Other maneuvers included crawling under the horse’s belly, hanging just inches from the mount’s pounding hooves.

In the Roman race, the cowgirl would stand with her right foot on one galloping horse and her left foot on the other. (The horses would have had to be very well trained to stay together, and the rider obviously had great balance and strength.)
The relay race required three laps around a track, and the rider had to change horses, and sometimes saddles, after each round. If they weren’t required to change saddles, many cowgirls perfected the “flying” change, leaping from the back of one horse to the other without touching the ground. Vera McGinnis is credited with inventing this move.
After Bonnie McCarrol and Marie Gibson were killed and several other women badly injured in rodeo accidents, cowgirl bronc riding became increasingly rare in the West, leaving only relay racing open to women competitors. But women’s rodeo gradually eroded nationwide for several reasons:
Small, local rodeos were no longer financially lucrative and livestock was in short supply in the 1930s, leading to the demise of the Wild West shows.
· Men held the central control of the sport.
· Many well-known women rodeo stars retired.
· World War II, with tire and gas rationing, did not allow travel as in the past.

From the mid-1930s until the late 1940s, cowgirls became mere props in rodeo, “glamour girls” whose beauty and attire were emphasized instead of athletic skill. In 1948, 38 women formed the Girls Rodeo Association (GRA) to give women an opportunity to compete in calf roping, barrel racing, and trick riding. In 1968, barrel racing finals were finally included in the men’s Professional Rodeo Cowboys Association (PRCA) National Finals.
In 1981 GRA changed its name to Women’s Professional Rodeo Association (WPRA) and today has more than 2,000 members. It sanctions 800 barrel races a year in conjunction with men’s PRCA rodeos. But women still do not compete with men. 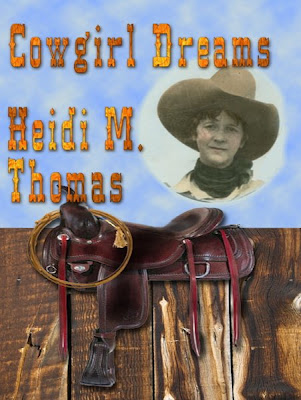 It’s been a long time coming, but as Rene Mikes, a corporate accountant from Denver and a bull rider, says, “It’s not a guy sport anymore.” But despite the heroic efforts of many women, including Cowgirl Hall of Fame and world champion bull rider Joni Jonkowski of Montana, women for the most part still do not compete with men.

Cowgirl Dreams is available at http://www.heidimthomas.com/ (for autographed copies) or from http://www.trebleheartboks.com/SDHeidiThomas.html
Join me on my next stop tomorrow at Jean Henry Mead’s “A Western Happening” http://awhh.blogspot.com/ Please leave a comment and at the end of my tour, I’ll enter your name in a drawing.
For the itinerary of all my stops on this tour and a list of prizes, go to my blog http://heidiwriter.wordpress.com/my-blog-tour/
Posted by Jami Davenport at 5:00 AM

Wow this was an interesting post! The strange thing is women are still competing with men to this very day! Sometime women get paid less to do the same job a man does. Women have proved over and over again that they can do it but there still seems to be a differents in this day and time. I have been there with the job thing and you have to work twice as hard to prove you can do it. In some ways times have changed in others it hasn't. Thanks for sharing with us Heidi. Your grandmother was a strong women!

very interesting post with the names of the many women who competed; kudos to all of them.
I've seen on TV where they lady stood on 2 horses, one foot on each horse, and it was amazing.
Your grandmother was among many strong women and determined women.

Thanks for this great series on your tour, Heidi. As a horsewoman, I really enjoyed reading about your grandmother and all the other daring ladies of rodeo. When I was much younger, I enjoyed getting on a horse that would give me a little "rodeo" before he settled down for a ride, but not so much any more.

And I remember as a young girl seeing a lady do the Roman ride and I thought how much fun that must be to do. I was young. Didn't think about the skill, just the thrill. :-)

Thank you, Jami for hosting me today, and thank you all for stopping in.

Yes, weren't those cowgirls a little ahead of their time?!? The courage, the strength and determination they had impresses me greatly.

Great to have you here. I'm sorry I'm late getting back. We ended up going out of town, and I didn't get back online until just a while.

RobynL: You're the winner of Heidi's prize. Please contact me, and I'll get you in touch with Heidi.

Even though I'm too late for a shot at the prize, I just hadta leave a comment. What a great post.

I find it interesting that as WWII opened so many doors for women, while it seemed to close this particular one. Or, at least, relegate this "door" to the shadows.