I had another post ready for today, but I decided to tell the story of my "bombproof" horse, Moses Malone. I've mentioned Moses previously in a few other posts. 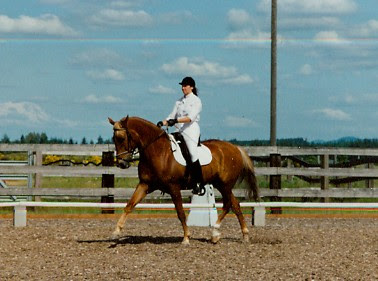 Way back (too far back to even think about) in my late twenties, a timid riding friend and I decided to find a horse to half-lease together. Now, I'm not exactly a brave rider either but compared to her, I was. She's one of those riders that rarely gets beyond trotting. Nothing wrong with that, she was who she was.


We took a trip to Seattle and checked out several horses. One big warmblood we considered was quite impressive, but there were subtle red flags. The owner treated him like he was a bomb ready to explode any minute. We never saw any behavior that justified her caution, but obviously it was there. My friend refused to try him out. So that was the end of him.

We checked out a few more horses, all unsuitable.


Finally we showed up at this backyard barn. A very pregnant teenager came out and proceeded to show Moses to us. It was love at first sight. He was five years old and a rich chestnut with a flaxen mane and tail. Even my timid friend tried him out. He walked, trotted, and cantered (taking the correct leads) and seemed calm and agreeable. The teenager needed to find him a home for obvious reasons. She'd prefer to sell him but agreed on a lease with an option to buy in a year.


Moses had an interesting history. As a baby, he and his mother had been boarded in a small pasture. One day when he was several months old, the owner showed up and hauled away the mother, leaving him behind. Driving by his pasture every day, a woman noticed that he became increasingly thinner and thinner. Finally, she stopped and inquired with the neighbors. None of them knew who owned him, nor had they seen the owner in months. They did give her the number of the property owner. A quick call to him revealed that the absentee owner hadn't paid board on the horse for months.


So she loaded Moses up and took him home, naming him Moses because she'd found him "abandoned in the bullrushes." She attempted to find the owner with no luck. At three years old, she sold Moses to the girl I got him from. This girl added Malone to his name because Moses Malone was her favorite basketball player.


Moses proved to be an excellent horse for me, not necessarily for my friend. I found him to be bombproof, she didn't. While he was a mellow sort, he did seem to be sensitive to the moods of his rider. He also had one quirk. He liked to play with you if you weren't paying attention. All of a sudden, he'd shy for no reason. He was quick, too. One minute there'd be a horse underneath you, the next you'd be suspended in air and he'd be halfway across the arena. Within in a months, he had my friend's number, and she quit riding him. I kept him and bought him about six months later.


Over the years whenever anyone rode him who was overly nervous, he became overly nervous. He also checked out his rider to see what they knew. If they didn't handle him with authority, he took over, usually in the form of walking back to the barn and waiting by his stall. If they were heavy handed, he became annoyed and jigged the entire ride if it was a trail ride.

On the other hand, even if you were a novice, as long as you treated him fairly and confidently, he'd do anything for you. One time at an open show, a novice rider friend of mine hopped on him for a novice western pleasure class. She'd never ridden him before. They finished 1st in a class of 34 horses! Moses took care of her. She just sat there while he listened to the announcer and walked, trotted, and cantered based on what was announced.


I owned Moses for years. I rode him to Prix St. George, showed him to 4th Level. I also jumped him. He was a handy little jumper but didn't start using himself until he hit 3 feet, while I maxed out at three feet. I also did a stint showing him in open shows in western and English pleasure.

He wasn't a talented dressage horse, quite the opposite, but he was a wonderful horse just the same. We spent countless hours on the trails by my house. You could just loop the reins around the horn and enjoy the ride.


In his later years, I leased him to two men for a trail horse. A few years ago, I tried to get him back. The two guys were almost in tears. They said it'd be like losing a member of their family. I let them keep him. He's 30 this year, and to my knowledge still going strong. I loved that horse.

He'll always hold a place in my heart.

Posted by Jami Davenport at 6:57 AM

Loved your story of Moses. So glad that he had people to love him after being abandoned. ANd there's nothing like that first horse that steals our heart.

Wonderful story - he clearly was a great horse!

What a great story! I loved it..