These past few weeks have been stressful for me horse wise. My mare is suffering from cellulites, as you probably know from my last post. It’s a slow healing process, but she’s on the road to recovery.


A week after my mare contracted cellulites, another horse in my barn also got it. Silhouette in Time, aka Howie, was a wonderful old gentlemen, a Thoroughbred schoolmaster, who’d been successfully competed by his owner to Intermediare. In his early twenties, he was teaching a new generation of riders. One rider won her first blue ribbon on Howie this past summer. He taught his riders the upper level moves with the patience of a saint, never giving anything for free, making you do it right to get the desired results.

I knew Howie pretty well, he was stabled across from my horse for a few years. Originally, Nicki evented Howie. Eventually, she focused on dressage. Howie wasn’t bred for dressage or conformationally predisposed to being a dressage horse. Because of his amazing heart and fighting spirit, he tried for his owner despite his physical shortcomings and took her a very long way. I believe Nicki won her silver medal on him.

Howie had a predisposition to cellulites. He contracted it a few years ago, and Nicki almost lost him, but he’d pulled through.

The day before this latest bout of cellulites, he’d been used in two lessons, one in the evening, and showed no signs of distress. When a student went to the pasture to get him for a morning lesson, one hind leg was swollen to twice its size, and he didn’t want to move. The vet was called, Howie was treated with an IV of antibiotics, among other things and put in a stall for the night. 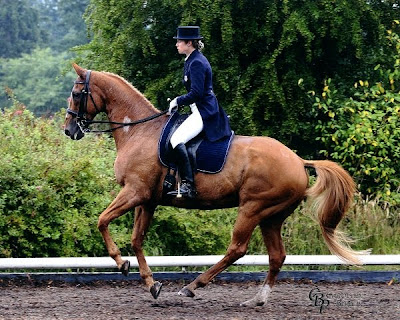 Sometime during the night, Howie lay down. He tried to get up and couldn’t. In his fight to get on his feet, he kicked out the entire front of the stall and was found early the next morning lying in the aisle way amidst broken boards. I understand it took several people to help get him to his feet. He was put in a pasture and blanketed.

I saw him later than afternoon, obviously in great distress. Several of us, including his owner, watched him and wondered what to do. Shortly after I left, Nicki took his temperature. It was 105. A few minutes later, Howie went down, and he wouldn’t be getting up again. The infection had gotten into his bloodstream. The vet came out immediately and put him to sleep.

Howie was put into a trailer for his last trailer ride and taken to Nicki’s parents’ farm and laid to rest.

All of us who knew him are heartbroken over the loss of this sweet old guy.

Posted by Jami Davenport at 3:06 PM

Very sad to hear of his loss - it sound as if he had a good life with people who loved and cared for him.

God bless Howie and those who loved him. My heart goes out to you.

It's so hard to lose them like that. I'm so sorry.

What a handsome boy. I always like to hear about Thoroughbreds that "make it" in dressage... rest in peace Howie.

RIP Howie. He sounds like an amazing horse, and so many people will have wonderful memories of him.

You'll all be in our thoughts.

This is the hard part of owning and loving horses. Life seems dark for awhile when we go through these periods of loss. I hope your mare continues to recover--rehabbing a horse from a major setback like this is a long stressful process--I know. And though Howie had a good long life, its always sad to lose one. My horse Burt died in his late thirties, after a great life, and it was still a very sad time for me.

Your post made me cry. Please convey my deepest condolesces to Howie's owner and everyone who grieves his passing. What a gift he was! He sounds alot like my Pete who is now a 20 year old schoolmaster who also evented and later went further in dressage (4th level) than his conformation certainly indicated. Horses like that are too precious to place a value on and when each one passes, it is a loss beyond measure. But what a wonderful life Howie had. Well loved, well cared for and a job he relished in. Does it get better than that?

I hope your horse continues to recover well and I send my warmest thoughts and prayers to everyone at your barn - 2 legged and 4-legged.

What a wonderful gentleman with so much heart. He leaves so many good memories in his passing.. I'm so sorry - take care - Shan

I am so sorry to hear about Howie. My thoughts are with you and your family.

so sad to hear about howie,your post sure brought tears to my eyes and memories of my dear TB Gabe whom I have to put to rest this summer after he fractured his hock in a freak accident...rest in peace boys! i am sure the green fields of the horsie heaven are just heavenly

Thanks for your comments, everyone. It's hard to lose animals when you become so close to them.

Thank you Jami and all of you who have posted such wonderful, supportive, and kind words. Howie was truly my best friend. Having him for the past 15 yrs., has brought me through my teenage, college, and young adult years. He was my dear friend! It sounds like many of you understand what it means to have a strong kindred relationship with a horse. Thank you so much for your support. ~Nicki, Howie's owner

Thank you for your tribute. I learned to love Howie the last year of his life as a stable friend for my buddy Leo. I was lucky enough to take a couple of lessons with him too. He will forever remain a kind spirit in my life.