A big EI welcome to Jordann, who joins us this week with a post about her first fall from a horse. Thanks so much for taking the time to write something for us, Jordann.

I've been a reader of Equestrian Ink for quite awhile, I really enjoy the stories and the discussion that follows. I love how everyone's voice is heard, no matter how small the comment.


Here is a story from my blog, about my first fall off my horse, Oliver. Attached is a picture of he and I this summer. The fall in the story happened four years ago, and as you can see from the picture, it hasn't damaged our relationship. 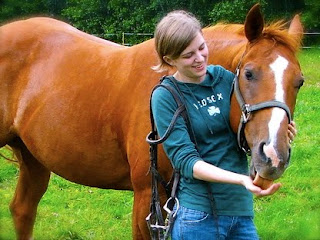 Oliver was three the first time I fell off of him. I'd been riding him in the arena and pastures in the summer when he was two, and had continued down that path the summer of his three year old year. It was early fall when I finally got the nerve up to start taking him out on the trails.

The first few times out were quite tense on my part, I have to admit, I was scared. I knew he needed to get out on the trails, it was the only way he would ever be competent, but I really didn't want to be on him his first time out.

My Dad and I would take him and Classic (trailsafe queen) out behind the barn, on some trails that we had made, and thus were not likely to be occupied by four wheelers or dirt bikes. I snugged him into her hip (or as close as she would let him, she wasn't a fan of his), and away we would go, me riding as quietly as possible, Oliver swinging his head this way at that, eyes bugging out, gawking at everything.

After a few rides like this we both began to gain confidence. A few minor spooks, but I was quickly realizing that they were nothing I couldn't handle, as long as I was ready. I was starting to have fun with it, introducing him to banks, ponds, hills. He was very honest, he really wanted to go where I was telling him, even if he was scared of the seemly bottomless puddles, and the scary squelching mud at the base of ditches. We even had a few whooping cowboy moments as he awkwardly negotiated a fallen log.

It was fall, and it was gorgeous. The leaves where all changing to brillant yellows and oranges, where I come from, we don't have any open spaces, it's all woods, so every trail ride was like being immersed in a brillant oil painting.

One afternoon after school, we went out, and I decided it was time for Oliver to lead for awhile. We'd led on and off before, and he was still having confidence issues with it, so all of the more reason to work on it. I nudged him up past Classic, ignoring her pinned ears, she can be a crab sometimes. We were moving slowly down the trail, Oliver's ears pricked, his steps short and quick, just a bit tense. The soft hiss of my dad opening a water bottle behind us sent Oliver into an instant crouch, ready to bolt. I held him in, stroked his coat, and noticed he was sweating. His eyes rolled back, looking for the source of the sound. I let him stand quietly for a moment. Everything was alright.

I didn't want to lose too much forward, he was still nervous when I urged him onward, three steps down the trail he stepped on a branch that shook between his front legs. I was ready for him to do anything at this point, bolt, buck, spin, shy, teleport. I was not ready for him to rear. And rear he did. Straight up and to the right, spinning away from the Scary Attacker Branch.

I started slipping, first back onto the cantle, then to the left as he spun away from me. Off I went, butt first into the dirt. (and onto that darn Scary Branch, shaking it again, making him back away) I still had his left rein in my hand, but no gloves. It didn't matter, he'd never been loose out of the pasture before, and the road was only 100 feet behind us, I wasn't letting go. The rein zipped through my hand, taking off skin as it went, but I caught it with about six inches leeway.

By this time my Dad had positioned Classic to block the path down the trail, and Oliver was so surprised that I had parted company with him that he stopped and just stared at me with intense interest. I stared back up at him, making sure that he wasn't going to start spooking away from me as soon as I got up. I started getting to my feet, carefully, not shaking the Scary Branch.

I gathered my reins, and took a damage assessement. My hand was rope burned pretty badly, but other than some bruises, everyone seemed ok. Once that was established, I marched over to the Scary Branch, picked it up, and started approaching Oliver with it.

When he was ok with me rubbing him all over with it, I mounted back up, and continued on the ride, this time letting Classic and Dad lead. My hand had started throbbing, and after about half an hour, we stopped and tied the horses, loosening their girths. I decided I'd made my point, and we headed home in the growing darkness.

As we reached the barn, looking warm and inviting with its windows illuminated in a golden light, I dismounted and led Oliver into his stall. This was perhaps the first and only time I've ever attended to my own needs before my horse's. I clipped him to his tie ring and dipped my injured appendage into his water bucket, such relief. I vet wrapped my hand and gingerly began to untack him. He craned his big head around and sniffed my purple clad hand, breathing in deeply, and exhaling with a rattle.

I rubbed his white striped forehead, scattering white hears all over his chestnut muzzle. I untied him and led him out to the pasture. It was almost completely dark by now. I could hear his pasture mates, Classic included, munching on their hay, just out of range of my sight. It was cold, I could see Oliver's breath, in a few short weeks we would start keeping them in the barn at night.

I uncliped my lead but Oliver didn't turn to join his buddies. He carefully extended his neck and started sniffing my chest, asking The Question. The Question is his careful technique, his gradual invasion of my space, a way of asking to be near me, and giving me a chance to rebuff him. When I do, he stays away, when I don't, the result is his nose on my cheek, breathing gentle puffs of warm air practically up my nose. I blew my own breath into his flared nostrils. We stood quiet like this for five seconds or so, then he turned away, and went for his supper. His big brown butt fading into the darkness.

It would be a lie if I said I wasn't nervous the next time I took him out on the trails. Heck, I was nervous the next 10 times I took him out. That fall happened four years ago, and although there have been a couple since, its that one that flashes through my head whenever I feel him start to waver under me. But at the end of the day, when he sniffs my cheek, he's my boy, and that's the only thing that matters.

Posted by Jami Davenport at 7:59 AM

I loved your story, Jordann. Its been a long time since I came off a horse and I'll freely admit that I'm scared to get on anything I think might stand a chance of dumping me. I feel like I'm too old to hit the ground any more. But I well remember that suprised expression on the face of a young horse--you described it so well. And the way in which a colt will try to make it plain that he didn't mean to dump you. Sounds like you and Oliver made a good partnership.

Jordann, I really loved your descriptions and the rhythm of your story. Thanks for sharing it.

What a cool story!

Thanks everyone! I'm away at school now so I only get to see Oliver about once a month, but we still have that great partnership, as you can see in the picture from summer!

I enjoyed your story, Jordann. Yes, all horses seem to find that Big Scary Item at one time or another, don't they? I'm glad you made it past that incident, and it sounds like you have a nice connection with Oliver. Thanks for sharing.

Wonderful post - thanks so much for sharing!! I loved it!