“When I grow up, I’m going to have a horse stabled there.” 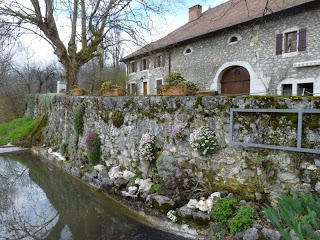 When I was a horse-obsessed teenager, this is what I’d say to myself every time we drove past a beautiful old farmhouse set high up on a gently sloping hillside close to our sleepy French village. Behind the farmhouse, dozens of aristocratic looking horses grazed in a series of rectangular paddocks stretching all the way up to the forest and the Jura mountain range beyond. I’d crane my neck as we zipped by in the car, wishing my eyes could zoom in and get a better look. I was twelve or thirteen years old, and as far as I was concerned, that place was paradise.
Unfortunately, paradise was private property and young trespassers would most certainly be, if not prosecuted, at least seriously told off. Although my friend Denise and I often borrowed a couple of ponies from a kind-hearted farmer and sometimes go exercise them in the small indoor arena within the property, we never were quite brave enough to sneak further down the track to get a better visual of the house itself. Looking back, I still don’t know whether we were officially allowed to go and ride in that indoor arena, but Denise seemed to think we were, and since she was slightly older than me I believed her. I suppose she was right because nobody ever came to kick us out!
Years passed. I outgrew ponies, graduated from school, left home, went to university, got a job, fell in love and got married. My incredibly generous father-in-law made my biggest childhood dream come true when he bought me a horse as a wedding present. I’ve since been lucky enough to own a couple of horses, all of them having been stabled in a succession of very nice places. Yet whenever I drove over to visit my parents I’d continue to glance up at the beautiful old farmhouse on the hillside and think how wonderful it would be to have a horse there. I’d recall all the fun I had riding around the countryside during my childhood, rolling my eyes at those crazy gallops through open fields with Denise. I’d get a little nostalgic, musing over how idyllic this part of the world is for horse-lovers of any age.
And then one day, a year and a half ago, I received an email from an old school friend, Caroline, who now lives in Belgium. It was one of those jokey emails that zoom across the internet, the kind people forward to dozens of friends. I chuckled, and was about to forward it to my own set of friends when I noticed Caroline had also sent it to someone I’d lost track of close to fifteen years ago: Stephanie. Back then, Caroline, Stephanie and I all had horses, which we kept at one of the local riding schools. But whereas Stephanie and Caroline were both really keen on jumping, I was far more interested in dressage, so when the dressage trainer I worked with at the time bought her own riding centre, my horse and I followed her there. Soon afterwards, Caroline met a nice man and left Switzerland for Belgium, and seeing as we no longer rode at the same stables, Stephanie and I gradually lost touch. I knew she’d moved, but didn’t know how to contact her, so I was thrilled when I stumbled across her address and immediately fired off an email. 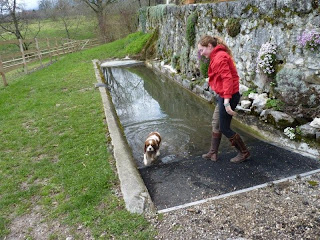 Stephanie soon wrote back. She’d moved on from show-jumping, was now professionally involved in the adrenaline-drenched world of eventing, and had recently bought a large equestrian property close to the French village where I lived as a teenager. The photos she attached left no doubt in my mind: she’d bought the beautiful old farmhouse of my dreams!


She and I emailed each other a couple of times, but life and busy schedules intervened and we lost touch again until early this year when, eager for a change in riding scenery, I phoned her one morning, wondering whether there might be room at her equestrian inn for my dressage horse, Kwintus.
“To be perfectly honest, I had no intention of taking in other people’s horses,” she replied, with a smile in her voice. I could hear her puffing on a cigarette at the other end of the line. “But you’re an old friend, and I do have an extra stable, so I’d be happy to have your horse here. Why don’t you come and take a look around? Not that there’s much to see at the moment because of all the damn snow… But I’d love to see you and tell you all about my big plans. ”
I was there like a shot. Sure enough, as far as the riding facilities were concerned, there wasn’t much to see – the outdoor arena was knee-deep in snow. The sky was a low, murky grey, the paddocks (all impeccably re-fenced) inaccessible, her three horses and tiny Shetland pony snug and snoozing in their stables. But there was a special feel to the place, a soft, relaxing atmosphere that told me my horse and I would be happy here.
Stephanie and I had a cup of tea, some chocolate biscuits and a nice long natter during which she told me about her hugely ambitious project: the construction of a state-of-the-art wellness centre for horses. The old, now tumbledown, small indoor arena where Denise and I used to ride the farmer’s ponies would be torn down sometime in April and replaced with one three times the size. There would be a new, modern stable-block for six to eight horses, complete with horse-sauna and solarium, an aqua-pacer (an aquatic treadmill for horses), an automatic walker, a lunging arena, a race-track…and goodness knows what else! She’d already built a massive outdoor school with a computer controlled floor, ensuring perfect footing in all weather…except snow. This arena was surrounded by a huge field upon which she planned to build a cross-country course. Oh, and she’d also recently had the walk-through, ice-cold splash pool below the courtyard completely refurbished with a slip-proof lining. The cold water did wonders for the horses’ legs! 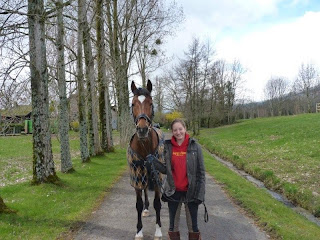 Frankly, as far as I was concerned, there wasn’t much to think about. My only worry at that time was the absence of an indoor school, the snow-logged outdoor arena, and our endless, abysmal winter. So I decided to be patient, leave Kwintus where he was for a couple of months, and move him in to Stephanie’s in early spring.
Just over a week ago, Kwintus moved into his stable in the beautiful old farmhouse high on the hillside. He’s settled in wonderfully; so wonderfully in fact that he seems to have dropped ten years in seven days; he’s prancing and dancing and snorting and basically being a complete show-off. Kwint is a friendly, people-loving horse, and definitely appreciates his view onto the courtyard because he can keep an eye on everything that’s going on. We’ve already been for long, slow rides up the mountain, strolled over to the nearby village, and worked in Stephanie’s gigantic outdoor arena. Wearing thigh-high fisherman boots, I’ve coaxed him into the walk-through, ice-cold splash pool and, in a couple of months, might even consider going in bare-legged myself!
Basically, I’m having loads of fun! It’s so nice to be riding in such a peaceful atmosphere and such stunning surroundings; great to be hanging out with Stephanie again, lovely to be getting to know her fabulous English groom, Leanne. My dogs are having a great time too, racing around with their new buddies Fonzo and Chelsea. As for Kwintus, he’s super-bright-eyed and almost alarmingly bushy-tailed! But what amazes me most is the fact that, so many years later, my childhood dream of having a horse in that big, beautiful old farmhouse on the hillside has come true.

Posted by Jami Davenport at 5:05 PM

I love those old European stables. The stone work and landscaping make them look like they belong. I can only imagine the history. How neat that you get to keep your horse in a place you loved as a child.

What a beautiful place. I only wish my own little horse ranch was half as picturesque. I really loved the time I spent in Europe amongst the old stone buildings. Hopefully some day I'll get to go there again. Like you say, I'll keep on dreaming. Its quite inspiring to see how your dream came true.

What a great story, Francesca. And what a fantastic set of circumstances that led you back to that place. Very cool. Thanks so much for sharing!

Thanks for reading. It really is an incredibly beautiful place. Even Kwintus seems to have a permanent smile on his face! We're excited for the work on the centre to begin, and I'll report back with photographs of new developments :). And you'll all have to come and visit when the project is up and running!