Yes, I know I have posted about the great race horse Zenyatta here a lot. For those of you who follow her career, you can barely get enough of this great mare. At six years old, she is unbeaten, winning all 19 of her races. She was featured on 60 minutes last Sunday, featured in Oprah magazine, she has won every single race she's ever run, including the Lady's Classic at the Breeders Cup in 2008, and then defeating the males last year in 2009 in the Breeders Cup Classic. 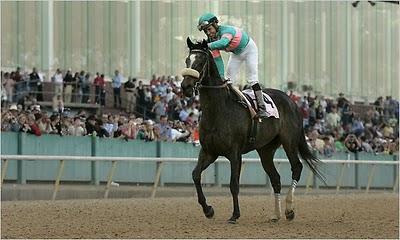 This morning, she flew across the country from Southern California, which is her home base, to Louisville, Kentucky. There she will compete in the 2010 Breeders Cup Classic at Churchill Downs on Saturday, November 6th - defending her title against the best male horses in the world. After the race she will most likely stay in Kentucky, and be retired to the breeding shed. 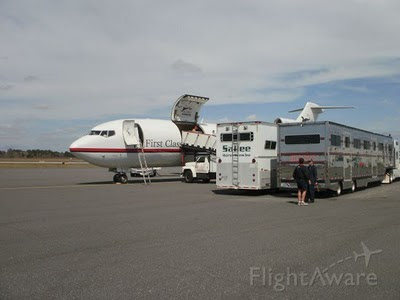 The Breeders Cup races are a series of races held over two days meant to showcase the best runners of the season. There are races on the dirt, turf, for juveniles and older horses, for fillies, mares, and colts, and at all distances.

The Breeders Cup Classic (the race featuring Zenyatta) will most likely be the last race in the schedule. Please make note the times above are Eastern Standard Time, and adjust your times accordingly. The horse racing channels of TVG and HRTV also carry coverage and news of these events, including the gallops and works of all the entrants in the week leading up to the big event. Exciting Stuff!

Can Zenyatta make it a perfect 20 for 20 and retire unbeaten? I'll be right there in front of my television, cheering her on. I hope you will be, too.

I love Zenyatta! I'm rooting for her!

I knew very little about Zenyatta but my interest was peaked after reading your posts about her. I was able to see her on 60 minutes. What a magnificent creature! Absolutely glorious! I kept telling my husband,"Look how big she is compared to the other horses and the people around her..." Then, when I heard the folks talk about her I understand why she's so special. One super athlete horse, always coming from behind.Hope she does it!

Thanks so much for the information and posting about her.

I love Zenyatta! She's like Seabiscuit and Secretariat, the pride of the people, only maybe even better. I'm hoping, praying, and expecting that she pulls it off, winning her 20th, and staying sound too. The only reason she might not win is if she runs out of track before the finish line. She always comes from behind and just barely does it. She looks like she is just warming up at the finish line and ready to go on.

She didn't start racing until she was three. Maybe people will learn that horses shouldn't be raced any earlier if they are to be true athletes.

Yes, Zenyatta had become a bit of a folk hero in horse racing, almost like Seabiscuit or Secretariat. I also think it's awesome that she didn't start to race until late in her 3 year old year, and she's still going strong and sound. I actually heard today that her owner, Jerry Moss, suggested in an interview that this Saturday might not be her last race. Wow. I guess we'll just have to wait and see!!

Zenyatta is by Street Cry, out of the mare Vertigineux, by Kris S.