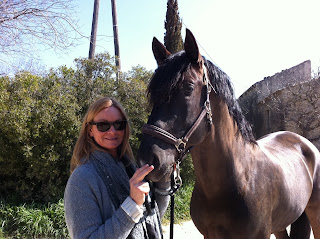 I was hoping to sit down and write an enthusiastic, bubbly, yippedy skippedy blog about Mr Super Gorgeous Lusitano’s impeccable vet check, which took place on Tuesday morning down in Avignon in the South of France. But, as we all know, nobody’s perfect, not even beautiful horses, so vets need to make sure they’re not okaying a horse presenting obvious signs of potential problems. Furthermore, my trainer, Marie-Valentine, is wonderfully meticulous, and always goes out of her way to ensure the horse being vetted is screened as thoroughly as possible (that's her, patting the Jack Russell terrier when we arrived late Monday night). 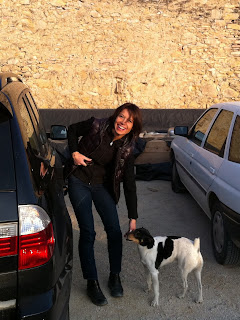 Basically, the horse passed the vet check. After a long examination which included watching the horse move on a small circle on the lunge in various terrain, flexion tests, numerous x-rays (including the horse’s back), the vet pronounced him sound, fit to compete and saleable. But of course, as I said earlier, no horse is perfect. This gorgeous Portuguese hottie has a somewhat funky right front foot, and the vet expressed slight concerns about it, pointing out that the horse needs careful remedial shoeing so as to prevent serious damage further down the line.

Marie-Valentine had already noticed this funky foot during our first visit to see the horse two weeks ago. The right foot is narrower, more upright, but since it’s not absolutely mind-blowingly weird looking (I probably wouldn’t have even have noticed it if she hadn’t pointed it out), and doesn’t seem to bother him, we decided a good vet exam would tell us everything we needed to know. 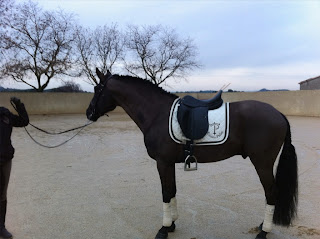 When we made the initial arrangements for the pre-purchase examination two weeks ago, Marie-Valentine contacted a reputable vet in Lyon with whom she works regularly, but when it turned out that his upcoming holidays and busy schedule would mean postponing the exam for another three or four weeks, she asked him to refer her to a colleague further south. And since it’s always good to have two opinions, especially when you’re dealing with a vet you’ve never worked with, she asked the vet in Lyon to double-check the x-rays, which we dropped off on a disk at his clinic on Tuesday evening our way back home.

We also thought it would be a good idea for him to take a look at some photographs we took of the horse’s front feet, so I’ve emailed them to him.

Why is it taking the vet in Lyon so long to get back to us? He only came back from holiday this morning, but has promised my trainer he’d get back to her before this evening.

So, right now, I’m still in the “yes, no, maybe so” phase. My stomach is on the trampoline.

If the vet in Lyon looks at the photos and x-rays and gives us the all clear, we’ll be getting closer to the edge of the woods. We’ll still have to wait for the results of the blood tests, sent yesterday morning to a laboratory in Paris, to ensure the horse wasn’t doped into goodie-two-shoes oblivion/recently injected with painkillers or anti-inflammatories/suffering from some scary pathology. And those results could take a full two weeks…

Are we paranoid? Were blood tests really necessary? As far as my trainer is concerned, it’s routine. She and I seriously doubt the people involved in selling the horse have might have resorted to any dubious tactics, or attempted to hide anything from us. They received us with such warmth and generosity on both occasions, inviting us for dinner, and insisting we sleep in their home instead of paying for a hotel. In fact, these people were so open and amazingly generous with us that we almost felt guilty about insisting the vet take a gazillion x-rays and then perform a blood test! But since buying a horse is a big deal, it’s better to be as careful and safe as possible than momentarily over-trusting and then seriously sorry.

With this in mind, during the drive back home, we also emailed photos of the horse’s feet to my farrier. In his opinion, the horse’s right front foot shouldn’t be too complicated to correct and improve, and I have utmost faith in his judgment seeing as he worked miracles on Kwintus’ stumbling problems for quite a few years.

What will the vet in Lyon say? Chances are he’ll echo his colleague’s opinion. Meanwhile, it ain’t over ‘til the fat lady sings. Okay, so I’m not exactly fat, but the closer I get to 50 the more blubbericious I become around the middle, which is a bit of a bummer. But if this vet delivers positive news later today, I won’t be whining about a couple of spare tires around my belly. I’ll be belting out the Hallelujah chorus, and trying not to worry about the possibility of funky blood test results.

Posted by Francesca Prescott at 2:36 AM

He's absolutely stunning. Keeping my fingers crossed that the 2nd opinion is the same as the first, and that the blood work comes back clean!!

Francesca--Correct me if I'm wrong, but it sounds like he just has a minor club foot. I have known several horses like this and with a good farrier, it was never a problem. I hope it all goes smoothly--he sounds like a lovely horse.

He's beautiful - here's hoping for a good result! My Noble had a minor club foot (if that's what it is) in front and was sound every day of his life.

Ooh, good luck, Francesa. This horse does look stunning. Does he have a name?

Thanks, everyone! The good news came in last night while I was watching American Idol (we get it one day later here) - I think the guy with the beard who doesn't think he's sexy but wants people to think he's sexy is brilliant, by the way. Anyway, the vet in Lyon says the horse has great x-rays, and the concerns about his right front foot are no big deal. He's just been badly shod for a while and needs a good farrier. And I have a very good farrier. So finally I can get excited, although as I said, there's still the blood test results to come in, but I'm not worried about them. I'll be flabbergasted if there's a problem with those.

And I can finally tell you what he's called, as I didn't want to reveal his name until I was a little more certain it would all work out. His name is Qrac de la Font.

I'm meeting my trainer for a celebratory lunch today. I think we may even have a glass of champagne!

Congratulations!! He's so gorgeous. My dream has been to ride a Lusitano on the beaches of Portugal and now you own one- I am envious!!!

And what will his barn name be? I can't imagine owning such a gorgeous animal. Good luck with the final buying stages and keep us in the loop!

Fantastyk Voyager: I'd never ridden a Lusitano until I sat on him; I'd ridden Spanish horses on holiday, but just on outside rides. Qrac is very...supple! It is a totally different sensation than on a Warmblood, although I'm sure he'll become more stable with work. Just riding a straight line in walk took intense concentration on my part as he tends to slalom all over the place! He's incredibly sensitive to the slightest shift of my weight in the saddle. It's going to be challenging, and interesting, and I'm looking forward to him coming here.

Alison: his barn name will be Qrac, pronounced Crack. So I'm sure I'll get lots of jokes about being on Crack! Oh dear! You know, I'm still finding it hard to believe that he's going to be mine...

Francesca, Gailey has a funny front foot. It's almost a club foot, and it have never been a problem whatsoever. The only downside of it is that it costs me a lot more to have her shod because the shoer has to hot shoe that foot and it takes quite a while to shape a new shoe just right because the foot is not round but narrow.

Jami: thanks for letting me know. Yes, Qrac's right foot is a little more narrow.

I think Kwint was always hot shod, his shoes were never standard, and cost more especially in his last year of work. He had to have special leather inserts packed with synthetic cotton wool to help absorb shocks because of his arthritis.

Congratulations Francesca on purchasing Crack! Ha, I had to say it! It was just kind of hanging there!!!! :D
Seriously though I am so happy for you and he is just gorgeous. Every woman should have a supple young male in their life. Don't you think? ;)

Mommyrides: thanks for initiating the Crack jokes!!! As for needing a supple young male in my life, I'll keep you posted. It may get a little caliente... Although I hope it won't get too caliente. Yikes!

Just checked in - that is very exciting news! Congratulations!

It's all sounding very good! My fingers are crossed!!!

whoops - didn't read all the comments before posting one... CONGRATS to you!!! Can't wait to hear more stories about him... lovely!