A Strut Through the Forest 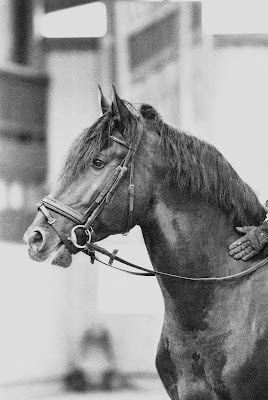 Qrac and I went for our first outside ride together yesterday. I say together because he’s already been on a few outside rides with one of the stable’s grooms, who reported him to be no trouble whatsoever.

“He’s very well behaved,” she told me when I enquired after her first foray with Mr. Caliente into the great wide open. “He calls a bit, but most stallions do. But he’s not scared of anything. He’s just very, err, very active.”

She smiled. “Let’s say he’s not interested in looking at the flowers, or taking in the view. He’s a bit of a Speedy Gonzalez.”

Not wanting to ask too many questions and get myself into a tiz-waz over my new horse’s increasingly evident desire to go forward, I left it at that. In the two and a half weeks I’ve had him, it’s pretty clear that Qrac is no plodder, and I’ve a feeling I’ll be doing transitions until the cows come home. Not that I’m complaining; I already love him to bits and have never felt as though he’s going to pull a nasty on me. He’s laid back, but with a big engine. And lots of stamina. He feels as though he could go on for hours. His forwardness doesn’t change between the beginning of a session and the end. It’s impressive.

Anyway, since I don’t really know anyone at my temporary stable, and that my reckless days are long over, I asked the groom to take him out a couple more of times. She went out once with another gelding, then with a gelding and a mare, then all alone, and each time Qrac was very well behaved. “He’s just very active,” she said nonchalantly. “He doesn’t drag his feet.”

Finally, I decided it was high time Qrac and I went for an outside ride, so I asked her whether she’d come along with us. She was happy to do so, and yesterday morning, made sure she saddled up a very chilled gelding. I climbed up onto Qrac, and off we went. Err, actually, off we pranced!

And would you believe the train came by as soon as I got on? It’s only a little train, but it’s right there, uber close, and it chose that very moment to choo-choo by. And then two teenagers on souped-up mopeds started zooming backwards and forwards, skidding around in the dirt. Yes, on my first time out with my horse. Typical. But Qrac wasn’t prancing because of the train (which didn’t seem to perturb him at all), nor was he freaked out by the souped-up mopeds. He was prancing because he wanted to go off into the forest with his buddy. So we pranced a little, and everyone watching the jumping lesson in the outside arena turned to look at my beautiful black stallion making a bit of a spectacle of himself, which was a little embarrassing. Then we pranced-sashay-clattered across the railway tracks, and once we got to the other side he immediately settled into his cruising speed, which I’d describe as a strutting power walk. Yep, this guy means business. He was on the bit, he wasn’t spooky, and I felt perfectly fine, but his energy level came as quite a surprise, especially after years of relaxed ambling along country trails with Kwintus.

Forty-five minutes later, we strutted back across the railway tracks, thankfully without too much show-offy prancing this time. However, Qrac couldn’t resist announcing his return with a loud whinny. Over by the jumping arena, a gathering of little girls from the pony club stopped eating their ice-creams and gasped with admiration. “Look, it’s Qrac!” they gushed. “Il est tellement beau! (he’s soooo beautiful!)

Qrac tossed his long black mane, Pantene-style. My new boy is hot, and he knows it.

Posted by Francesca Prescott at 3:56 AM

Francesca--He is gorgeous. And how cool is that? You're riding a prancing black stallion.

Oh I'm feeling jealous of your fabulous power stroll thru the forest with your gorgeous hunk o' horse!

I'm so happy you found such a wonderful horse, a Prancing Black Stallion, as Laura said.

Every girl's dream. We need lots of pictures.

Wow - every little girl's fantasy come true. I love it.

Thanks for the update! I was watching the horses leading the parade after William and Kate's wedding and wondered how they handled all the hoopla. Qrac obviously knows how to do it.

"Over by the jumping arena, a gathering of little girls from the pony club stopped eating their ice-creams and gasped with admiration. “Look, it’s Qrac!” they gushed. “Il est tellement beau! (he’s soooo beautiful!)"

If boys only knew what girls really loved, there sure would be a lot more boys riding at a younger age!! :D

Congrats on that first ride! You are doing great!

He sounds like he is perfect! What a show off!
Glad your first ride out was uneventful!