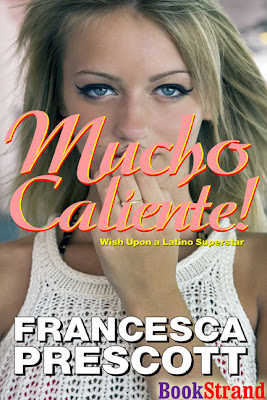 “Mucho Caliente! – Wish upon a Latino Superstar” by Francesca Prescott

Just so you know; this is not a horse story, which, come to think of it, is rather strange for someone as passionate about horses as me. However, I’m sure you’ll find oodles of passion (and plenty of giggles!) in “Mucho Caliente!”, my romantic comedy.

Thirty-seven year old Gemma hadn’t reckoned on being seated next to Latino heartthrob Emilio Caliente on the flight to Ibiza. She’d bravely dismissed her cheating husband’s generous divorce settlement, opting instead for a creatively satisfying, financially independent, bohemian lifestyle on a Spanish island in the sun. Falling in love with a pop music superstar eight years her junior was definitely not part of her plan. Common sense dictates staying away from Emilio Caliente and his cinnamon kisses: his life is in turmoil, his latest single has bombed, the press want to see him naked and his hellacious manager seems increasingly deranged. But surely the chain of extraordinary events that insists on bringing them together is proof that love is oblivious to common sense? Does Gemma dare follow her heart and wish upon a pop star without undermining everything else she set out to achieve?

Here is an excerpt of this funny, hopelessly romantic story. I hope it makes you smile! And if you’d like to read more, all you have to do is leave me a comment. I’ll pick a name out of a hat next Friday. Good luck!

I suppose things could be worse. There was a moment when hara-kiri seemed like an attractive alternative.

First of all, Emilio didn’t recognise me in the water. Of course, the wet look isn’t
really moi, hairstyle speaking. Maybe the sun was in his face. But still…

It was when I collided with the largest and meanest jellyfish in the Mediterranean that, fearing imminent death, I started screaming for help. Did Emilio jump in to save me? No, he did not. He ignored me and continued to grind his pelvis towards his foot mike, lip-synching to his horrendous remix of Besame Mucho.

It was only when his bass guitarist pointed out to him that someone might consider doing something about the drowning nutcase in the water, that Philip, the skipper, a rather gorgeous, very gentle and polite young man with black hair, abandoned ship, swam towards me, flipped me over, grabbed me around the neck and put his lifesaving skills to good use. He dragged me through the water towards the boat where Emilio and his merry mariners were shouting febrile instructions.

Being rescued by a strong and sexy mariner still held its fair share of glamour in a damsel-in-distress-ish way. It was when we reached the foot of the ladder, and, to my horror, Philip placed a hand between my legs and pushed me out of the water and skywards from underneath that the sheer ridicule of my situation hit home. It was a move similar to the one performed by world class ice-skating couples: the man places his hand on the woman’s crotch, picks her up and twirls her gracefully through the air. I’d often wondered about that. Now I’ve experienced it. But I wasn’t wearing anything. At all. Nor did I get to twirl.

My gut feeling is that the overall effect had little in common with an old Esther Williams aqua-spectacular. I was thrust out of the water bare bottomed, my bikini top flapping around my ears, watched from the beach by a gaggle of hysterical Caliente’s Chicks, watched from the boat by a wide-eyed Emilio and his buddies. I caught a glimpse of surprise on Emilio’s face as he recognised me, rolled up his sleeves, grabbed my hand and pulled me onto the deck where I lay sprawled, gasping for breath, the inside of my thighs red, raw and blistered from the jellyfish sting, most of my goodies on show.

It was one of those red hot and icy cold paralysing moments when you don’t quite know what the next best move might be. You’re not feeling bad enough not to care what you look like, yet you’re too embarrassed by the way you look to actually move. So you wonder whether you should pretend to be, if not on the verge of death, then at least more or less comatose, therefore possessing a valid excuse for looking, such as I did in that particular instance, like a limp and battered dodo.

Worse, my wild, paranoid imagination kicked in and began to meddle with reality.

Shit, I thought, he thinks I’m one of them. One of Caliente’s Chicks. And hey, guess what? I am! Should I bring up the subject and test the ground? Or should I adopt a hoity-toity attitude towards the women on the beach? A member of Caliente’s Chicks? Who? Me? No way! But then - thanks so bloody much Celeste! - he knows about the T-shirt. If I deny any connection whatsoever to the Chicks, will he check? My name is probably on a computer somewhere. The truth is out there. Sooner or later, I’ll be exposed. I’ll be sentenced to ten years of forced labour on the pink and white boat in a baby pink sequinned bikini, serving cheap champagne to mindless twits like myself. My hair will be massacred by peroxide. Kirsten will spend hours smooching Emilio in front of me. I’ll have a choice between marrying the porky captain with the perky package or walking the pink plank.

I felt dizzy. I suspect my eyes might have rolled most attractively in their sockets. I might even have dribbled seawater. I probably had seaweed stuck between my teeth.

Yet some pathetic part of me was still hoping that it might cross Emilio’s mind that the lady doth need a touch of mouth-to-mouth resuscitation. That he might seize the moment. Use it as an excuse.

I waited, trying to squint through my eyelashes to see what level of concern I was causing. So far, silence. Should I roll overboard and turn myself into fish fodder?

Posted by Francesca Prescott at 1:17 AM

A HOT story for a HOT day and a HOT contest (I've read it--I should know!)

I LOVE summer reading... I used to have a job at a beach resort. My 'lunch' hour was at 4 PM. I'd take my book, head to the beach, and get lost in the story for that time - the story was always far more interesting than my job!

I think I blushed and crossed my legs when I read that part about Gemma's goodies on show. Poor girl. How do you recover from something like that? I'll have to read the book to find out. :-)

I want to know what happens next! If I don't win this one, I'll have to buy it. Is it available as an ebook?

Alison: Thank you! I'm happy you enjoyed this wacky book!

Dreaming: I love summer reading too. I've got a giant pile by my bed and am currently almost done with Douglas Kennedy's latest novel...which isn't exactly light and bubbly, but I love his stories. Good luck :)

Fantastyk Voyager: I like to think it's a feel good book!

Once Upon an Equine: LOL! Can you imagine?! Poor Gemma! Good luck.

Aldercreek: all sorts of things happen next!And yes, it's available as an ebook, and on Kindle from Amazon. You can find more details and the first chapter on my website, at www.francescaprescott.com. So happy to hear it piqued your interest :)

Looking forward to some good summer reading.....it's really too hot to do anything else!!!! Thanks for the sneak peak Francesca. Anything like that every happen to you? Drawing from your experiences that kind of thing, hee hee!!!!

Mommyrides: I almost envy your heat! We're having autumn-style temperatures at the moment; I'm considering putting socks on today! And a sweater.

Luckily for me I never experienced anything like that! Can you imagine?! How embarassing! But I've got myself into plenty of daft situations over the years. All I needed to do was embroider!

Buying this if I don't win it!!

Me, me!! LOl. That scene is skin-crawlingly embarrassing. I think it is going to be a great read. I'll totally ebook it if I don't win. Thanks for the excerpt!
Nikki

Hmm... don't know why that didn't work, I am usually signed in as battleshipdestroyer? My horse's show name, she's a tank!

Okay NOW I am signed in I think? Sorry for all the prior unknowns. Somehow my profile disappeared? Still excited about your book though! LOL. Hopefully I figure this out soon.
Nikki

It is much too hot to be out with the ponies mid-day. My second favorite thing to do is curl up with a good book and a couple of pups. Crossing my fingers!