Last night I stayed up late to finish this book: 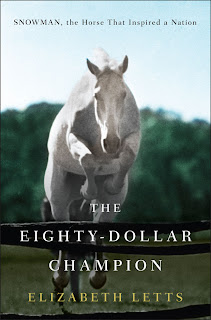 The Eighty-Dollar Champion
Snowman: The Horse that Inspired a Nation
by Elizabeth Letts
Ballantine Books/ Random House/2011
After wiping tears from my eyes, I got up this morning to give it five stars on Goodreads, and here is my review:

You can't help but be inspired but this story of a once-in-a-lifetime horse that was literally saved out of the back of a killer's truck. It's not only a story of Snowman and the special bond he had with a young immigrant from Holland named Harry de Leyer, but it's also the story of a moment in history. Elizabeth Letts seamlessly weaves us in and out of the rich American country estates, where horses were king, to World War II Holland when the Nazis occupied the country. But it is mostly the story of Snowman, a quiet, gentle half-plow horse, who accomplished so much in the show jumping world that it allowed an entire nation to dream big dreams. You'll believe in miracles too, after reading this, and you'll never look at a rescue horse in the same way again.

Harry de Leyer first saw the horse he would name Snowman on a bleak February afternoon between the slats of a rickety truck bound for the slaughterhouse. The big gray horse had matted hair, open wounds on both knees and harness marks across his chest. He was as plain and friendly as a favorite mutt. A man’s best friend kind of horse Harry decided. He bought him for $80.

I have to credit the author for keeping us on the edge of our seat through horse shows and jump-offs, triumphs and let-downs. This fantastic horse and the special relationship he shared with a young riding instructor who saw his potential is well worth the read. Truly inspiring and if you're a horse person, you are going to love it. I was lucky to get an early copy from our library, but this is one book I'm going to buy and keep on my shelf.

The story takes place mostly in the 1950's, and Snowman has long since gone to Horse Heaven. But Harry de Leyer is alive and still riding at age 83. Here's a recent article about him: http://www.readthehook.com/100790/horsin-around-galloping-grandfather-trains-legendary-equines

Tomorrow, September 21st is Harry's birthday. He'll be 84. Wish him a Happy Birthday!

Have you read the story of Snowman yet?

I've always loved the story of Snowman, and will definitely search out the book - thanks for the recommendation!

Not only have I read the book Snowman but I have had the opportunity to meet Harry de Leyer himself and can tell you both the book and Harry are great...I loved the book and really enjoy watching Harry as he still works with riders today in the horse jumping world...The book gives all the dream of taking nothing ro something with love and respect involved...

Linda--Thanks to your review I just ordered the book! I have to admit that I have very little time for reading these days (this is a sad thing for an author, particularly, to admit to), but you made :Snowman" sound irresistable. Thanks for the tip.

I wanna read this now! I actually wrote the story of Snowman in a the book "Animals You'll Never Forget" for Steck-Vaughn. And why didn't I think about writing a book like this so I could become rich and famous? DUH.

Kate and Laura and Alison - Hope you enjoy it as much as I did. Let me know.

Betty - Harry sounds like a true horseman and someone I would love to know.

Alison - I know the feeling - why didn't I write that? I will say that an immense amount of research went into this book, and it shows.

I cannot wait to get my hands on this book! Now I am looking forward to a blustery Pacific Northwest week-end to get lost in this book.

Linda, thank you for this, I've ordered the book and am looking forward to receiving it. I'm off to Cornwall now to take my daughter to university, so rough emotional days ahead!

I have the original story of Snowman published back in the 50's or 60's. Can't remember when. I loved that book as a kid and read it over and over.

Mary and Francesca - Yay! Let me know what you think!

Jami - After some research, I found out that earlier book was by Rutherford Montgomery, published back in the 1960's. I'm sure I read it too, since I devoured (and still do ;-)) every horse book I could get my hands on.

I think I may have to get my hands on a copy of this book now! Thanks for recommending it!

I've not read the story of Snowman, but now I'm going to. I have the Breyer model, but don't know much of his story. Thank you for the review. I'm adding it to my growing list of books to read.

My copy arrived this morning :)