Since most of you that follow this blog are not only horse people, but also readers - I'd like to talk a little more about my most recent book, The Girl Who Remembered Horses, which released November 2011. 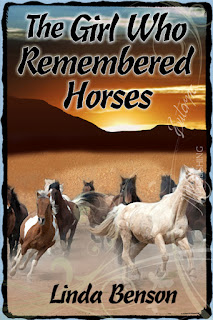 This is a novel set in an imagined future, in which the world has forgotten the ancient bond between horses and humans. One girl, however, dreams of horses, although she has never actually seen one. Here is a short blurb:


Several generations into the future, Sahara travels with her clan in a barren environment where recyclables are bartered for sustenance, and few remember horses or their connection to humans. But Sahara has recurring visions of riding astride on magnificent animals that run like the wind.

With the help of Evan, a young herder from the Gardener's Camp, Sahara discovers a crumbling book containing pictures of humans riding horses and learns her visions are real. Confronting a group of hunters led by hot-headed Dojo, Sahara rescues a wounded horse, but the animal escapes before it can be tamed.

Sahara is labeled a foolish dreamer and almost gives up her quest. Following horse tracks into a remote ravine, she finds wild dogs attacking a dying mare, and must drive them off in order to save the foal. Now she must attempt to raise the young animal, finally convince her clan of the ancient bond between horses and humans, and learn the secret of her true identity.


I talked about the inspiration for this novel in a post I wrote last November - how the story intertwined my research about women's passion for horses and the dire fate of some horses today. If you missed it, you can read that post right here.

I published The Girl Who Remembered Horses with a brand new publisher called Musa Publishing, which at the moment only produces eBooks. (Hopefully they will come out with books in print at some point.) At any rate, although the eBook market is taking off big time, it still limits the audience to those that have an eReader. (Although there is a PDF version available, too, which can be read on a computer.)

The Girl Who Remembered Horses is labeled Young Adult, but at the moment I believe only a handful of young adults have actually read this book. So far, based on the numerous 5-star reviews the books has been gathering on Amazon, it's mostly read by adult women - some of them horse gals and some of them not, although I do have one great review by an 11-year-old girl.

I would love for this book to be more widely read by an even younger group of readers: those ages 9-13, a middle grade or tween audience. But how many kids of this age have access to an eReader? I believe we are in the early stages of reaching that audience with eBooks. As more and more adults buy Kindles and Nooks and tablets, the older versions will eventually get passed down to the younger members of the family, who hopefully will be able to choose their own reading material. Some teachers are beginning to use eReaders in the classroom, and libraries are ordering more and more books their digital collection for readers to borrow. Musa's books, in fact, will soon be available on Overdrive, and available to many libraries across the country.

So in order to increase the readership of this book, I'm giving away three copies in a random drawing. I hope that if you win, you might do one of two things - either write a review somewhere (on Amazon, B&N, Goodreads, or a blog, if you have one) or allow a younger reader to read this book, and let us know what they think.

All you have to do to enter is leave a comment below and tell us how you read eBooks. (On a Nook, a Kindle, a tablet, an iPhone, or even on your computer.)

Help me get this book out to a wider audience. Is it best enjoyed by adult women, young adults, or younger readers? I would love your thoughts - and I appreciate the help!

Thanks, everyone! Good Luck!

I would love to read this. :) I have a kindle, but really that was just my gateway device. Since getting my fancy phone this summer I read mostly on my kindle app on my android phone.

I always have my phone on me and it is perfect for middle of the night reading when I'm nursing my daughter.

Sorry. Read too fast. Thought you were looking for ways to access the YA market. How I read: a few more ebooks, esp for fiction but my first loyalty will always be to the codex. Proper audience: whoever finds and enjoys. I am amused that anyone still thinks of Harry Potter as a kids book. You don't sell that many coopies w/o a LOT of adult readers. Was that closer to what you were asking?

Thanks for commenting. Alexa - it amazes me that people can read on their phones, but like you said, they are handy and right there.

Rodney/Katherine - thanks, those are great ideas to get the book out to horsey kids. And it's true, lots of adults read YA now. Maybe this book will have a wide spectrum of readers that love it. I hope so!

I have a second generation Kindle, but I mostly read on my iPad these days. I have an almost 11 year old daughter who loves horse stories. I have to admit that I have offered to share my Kindle with my daughter and 15 year old son, and I'm a little surprised because they don't want to use it. They want "real" books.

Thanks, Teresa, for that info. I've heard that some kids like paper books better (and that's fine) and some are embracing eReaders faster than adults are. I was a die-hard "real" book person too, until I got a Nook for Christmas. Now I read both, about half and half, and often I read two books concurrently, one on each medium. *grin*

I am fascinated and would love to read this. I don't have an e-reader or a smart phone, though, but I can read a pdf on the computer. I have a large (HUGE) collection of supposedly YA horse stories and it surprises me that a) more adults don't read them and b) so much of what is published and popular is so poorly done (*coff* Saddle Club *kaff kaff*).
Judith Tarr's Lady of Horses is futuristic and definitely for adults, but is also very well-written.

I'm neither a kid, nor a mother. But I buy only eBooks when it comes to fiction (to read on my iPad), I'm a horse lover, and very big on SF/Futuristic titles. To be honest, this book is already on my TBR list, but I wouldn't mind getting it for free :>).

This book appeals to the animal lover in me. I grew up with a father who clocked thoroughbreds for a living. My dream: to one day rescue a burro or two.

Alexa, Teresa, and Greenie - Congratulations! You are winners of a copy of The Girl Who Remembered Horses. Please contact me via email: linda (at) lindabenson.net to arrange for delivery. Thanks everyone for entering!