Training a Cutting Horse and a FREE Book About Cutters

My first novel, Cutter, was inspired by the years I spent training and showing my horse, Gunner. I bought Gunner as a green broke three year old (for a lot more money than I could really afford). Here I am, young, proud of my horse, and ready to train him to be a world beater—the day I bought Gunner. 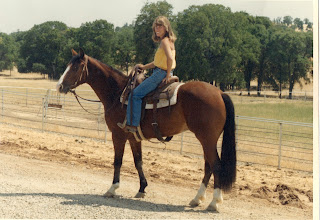 I had spent some time working for cutting horse trainers, and I thought I knew plenty. I was quite sure I could train Gunner to be a solid cutting horse. But, of course, I had never trained a cutting horse from green broke to competitive. I had a lot to learn.
But I persisted. And Gunner was a really talented horse. I worked a lot of cattle on him. I rode him virtually every day. He learned to cut a cow. Here we are out at the family ranch, cutting those critters. I think we both look pretty intense. I particularly like the way my hair and his mane are standing straight up. Note the slack in the reins. 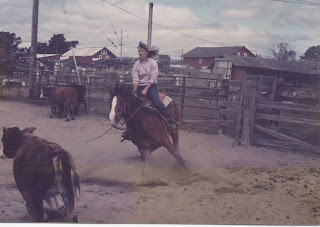 Being able to effectively cut cattle at home is very different from succeeding in cutting horse competition. A cutting class has very specific rules. You break a rule—say you “switch” cattle, or you have a “hot quit”, well, you’re not going to score well. And then, whether you mark well or not has a lot to do with cutting the “right” cow, and you have, at most, three chances to get that done in the two and a half minute run. So, often, you may not make any big mistakes, but you don’t get a chance to get your horse “shown.” (This happened to me a lot in my early years.)
And then, cutting is a judged event, and, I’m sorry to say, that, as in all judged event, there is a large political element. As someone on a “homemade” horse, and not being the client of a big name trainer, I was at a huge disadvantage when it came to this aspect of the sport. Nevertheless, eventually I won quite a little bit.
Below you see Gunner winning the cutting at our local county fair. He was eight or nine by then, and a pretty darn solid cutting horse, if I say so myself. I still was no great showman, but I did a workmanlike job. And sometimes, as on this day, it was good enough to win the class. We marked a 72 1/2 here, on tough cattle, and it did the trick. This was probably my favorite victory—in front of the hometown crowd. Gunner won other awards, but that county fair buckle meant the most to me. 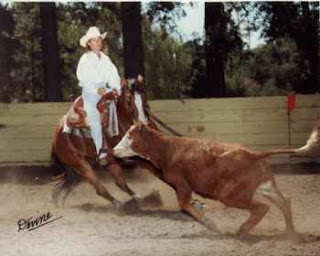 Gunner went on to be a team roping horse for me. In the photo below you see me heading a steer on him. Note that neither of the rope horses in this photo is wearing a tie down. Those of you who are team ropers, or have seen much of the sport, will know that those are pretty well broke horses. 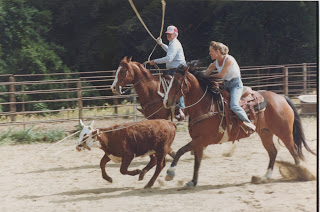 When Gunner was fifteen I retired him from competition and used him for light riding. He’s seventeen in this photo. 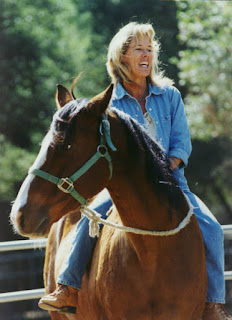 When he was twenty I turned him out to pasture with some companions—he’s the horse on the far right. 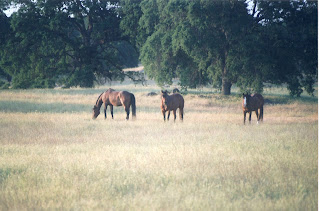 And last year we brought him home so he could eat all the equine senior feed he needed—and get lots of attention. Here’s my son hand grazing him. Gunner is 32. Looks pretty good, don’t you think? 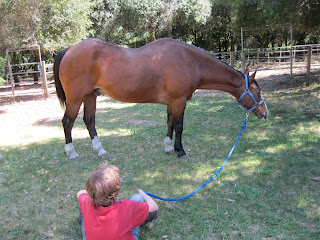 So that’s Gunner’s real life story—and it’s a pretty happy one. I did successfully train him to be a cutting horse—and later, I wrote a mystery novel about that cutting horse world that I knew so well. This novel, Cutter, is the first book in my mystery series featuring equine veterinarian Gail McCarthy. Though it is no cutting horse training manual, it does have descriptions of what it feels like to ride a cutting horse, and gives a pretty clear picture of what a “cutting” is like. Not to mention there are many vivid portraits of some pretty classic cutting horse trainers and owners (yes, drawn from life).
The horses, too, are based on real horses that I knew, and Gunner appears in this story. He is also the model for the horse on the cover. 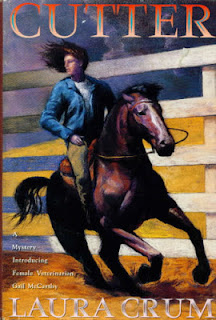 Though the central mystery is based on a shady deal I was told about, I must admit that it is totally fictional, as it is described in the book. But in all other ways the book is a very true representation of the cutting horse world that I knew.
So starting today, for five days only, (October 24th through October 28th), I’m offering a FREE Kindle edition of Cutter. It’s a great chance to give this book a try with no downside. And, if you find you like it, there are twelve books in the series, each dealing with a different aspect of the horse world.
So here is the link to the free copy of Cutter. If any of you do/have read this book, I’d love to get your feedback. I’d be really grateful if you’d post a review on Amazon or Goodreads. And it’s totally fine to point out where you think I could have done better.

I wish all horse stories ended up as good as yours. We will check out Cutter.

Thank you, Sam and Promise...let me know what you think of Cutter. And yes, I'm very grateful that Gunner has had a long and happy life.

Going to it now, looking forward to reading your perspective.
Thanks!

Thank you, cindy. I love hearing what other horse people think about my books.

If I had a Kindle, I'd definitely get a copy. Have you ever considered publishing with Smashwords?

Susan--Yes, I have--just haven't got it done yet. But...I am told that anyone can get the free Kindle app and read the book on their computer or Ipad or whatever.

I posted the blog on FB. I wanted to get it up fast. I'll post Cutter cover on later today.

Thank you, Alison! And you know how much I love promoting (!) Still, what can be bad about a free horse themed novel?

I know it's an excuse but I find getting my thoughts in order to produce a half decent review really difficult. I honestly don't know how professional writers do it. I will at some point.

Since I've already bought Cutter, I've put a link up at Dear Author on their daily deals page, if that's ok Laura?

Rats, that comment above was me, no idea why it posted as anonymous.

FD--Any reviews and/or comments or mentions that you put up are very much appreciated. And thank you for the link. I have the worst time composing a decent review myself, so I hear you. I have a tendency to say, "I loved this book," and leave it at that, which isn't very helpful. But thanks so much for buying Cutter and I hope you found it entertaining. My friends all say I shouldn't do this, but I can't help saying that it IS my first book and I do get better as I go along (!)

Laura, I started reading "Cutter" the other day, and although I am only 5 chapters in, I already love it. :)

Thank you Promise! I hope you enjoy the rest of the book. Let me know. I have a tendency to apologize for this book, as it was my first novel, so I am always happy when someone reports that they liked it.