Not on a test, but on writing this post. I have an intense book deadline for an American Girl that has twenty different endings. It's a choose your own adventure type book for kids, and about nine p.m., when my head is swimming, I get lost in my own plot strands.  So I am cheating on this post today by publishing a guest blog I did about a year ago for another blog. Like all my posts, it is short. That is a result of my waning attention span in my old age.

On a lighter note -- I hope everyone had a drama free holiday as peaceful as Laura's ride on the beach, and that no one gains any wait on Christmas goodies sure to come. 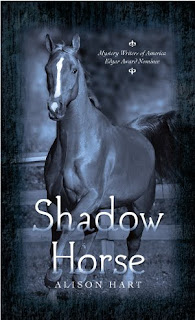 I write mysteries, suspense and historical fiction, mostly involving horses, all based in reality.
In Shadow Horse and its sequel Whirlwind, Jas must prove that Hugh Robicheaux killed two horses for insurance money. The mystery revolves around true scams that can happen in any sport, but in this case, the high stakes sport of horse showing:

“One of the worst cases of fraud happened in the early 1990’s,” Miss Hahn told Jas. “Some of the top paid riders and wealthiest owners in the business paid a lowlife named Tommy Burns to kill their horses.
“In one case, a horse named Empire was galloped until sweaty. Then he was put in a clean stall and electrocuted. Based on the sweat and clean stall, the vet ruled colic.”

There were worse details in the magazines and articles that I read for research and at the rescue farms I visited, details that turned my stomach. I wisely left many of them out.  An author continually makes choices about the amount of research and reality to include. Too little can result in a bland story, too much can make it gruesome. 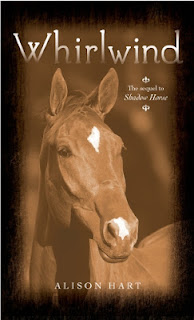 In my “Racing to Freedom” trilogy (Gabriel’s Horses, Gabriel’s Triumph and Gabriel’s Journey) set during the Civil War, my research sent me to the dark times when African Americans were treated with brutality and disdain. I definitely had to make choices, leaving out graphic incidences of slaves being hung, whipped and sold from their families. However, there was plenty left for a true and gripping tale such as the scene from Gabriel’s Journey, set during the real Battle of Saltville, Virginia and based on a true incident:

Hoofbeats thud in the foggy distance. Then angry words drift down the hillside from the cabin of wounded soldiers. “Drag them coloreds outta there!” a gruff voice hollers.
The surgeon’s voice rises in protest, but moments later the report of revolvers echoes through the hills. I startle with each shot.
“Oh my god,” Captain cries out hoarsely. “They’re killing the wounded.”
Private Black’s words flash in my mind like a warning. When those Confederates see our black faces charging them with rifles and bayonets, they’re going to attack us with a vengeance.
I’ve written over sixty books. When people ask me where I get my ideas, I tell them, “Just pick up any newspaper. Or read a history text. Horror, crime and mayhem are everywhere.”
And they make terrific stories.

Oh, I hate when I am in a hurry and make a spelling error or typo as in 'Wait' for 'weight'. Or perhaps I did mean 'wait' since my life has been too busy and I sure would love to sit a spell!

I used the "killing horses for insurance money" scam as part of one of my mysteries, too. Its so tempting...since it has definitely happened in real life, and more than once.

Anonymous said...
This comment has been removed by a blog administrator.
December 3, 2012 at 8:07 AM