How it all Begins

In previous posts I have discussed beginnings and touched upon research. The last post Laura mentioned her adventures with a book club who dissected her mystery. Awkward! (Laura, you handled it beautifully). My question was "had any of these ladies attempted to write a mystery?" Starting, researching, plotting, characterization. . . the time, effort and creativity needed to craft a book-length piece is incredible. Sure the book club's job IS to discuss the book. But how much better if they had asked Laura questions on how she actually accomplished the writing?

So today I am going to discuss just one aspect of one book, Emma's River, which is historical fiction for 8 - 10 year old. YAWN. A young reader. Lightweight compared to Sophie's Choice. True, yet the amount of work I did seemed as difficult and creative as a Styron tome, beginning with where did the idea come from and how did it turn into a book? 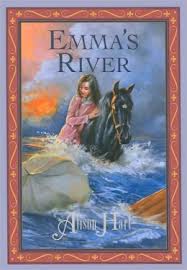 When I was researching for my early chapter book, Anna’s Blizzard , which is all about the Blizzard of 1888, I read many books. One of my favorite was Mollie: The Journal of Mollie Dorsey Sanford (Bison Books). Mollie traveled from to by train and steamboat. She was one of the first families to settle in the , and I was eager to read about her life on the plains to help shape my characters and setting for Anna. However, as I read, I was totally fascinated by her description of her steamboat journey. Mollie and her family traveled on the luxurious cabin deck, which “boasted of staterooms, saloons, and a nursery.” She wrote of meeting “fussy old ladies with their poodle dogs” and a new friend Dora who turned “sweet sixteen.” But she also wrote that a “destitute creature was found today with a dying child” on the main deck, where the immigrants traveled. This piqued my interest!

Mark Twin also wrote about his steamboat trip up the . He described the passengers boarding the New Lucy “like a mass of sheep tumbling over each other in the dark.”  He wrote about geese on the sandbars, thunderstorms, and climbing to the top of Chimney Rock. By now, I had decided that a steamboat trip would be the perfect setting for an adventure. Further research cemented the idea.

My first version became a picture book titled Up the Big Muddy.  I envisioned illustrations of lovely ladies waltzing under chandeliers on the cabin deck as well as immigrants and sweaty deckhands squashed together on the main deck accompanying my rollicking text. Alas, the picture book was nixed for several reasons; the main reason was a similar picture book had just been published by a different publisher. Fortunately, my editor liked the idea and suggested turning it into an early chapter book, which meant a more complex plot. 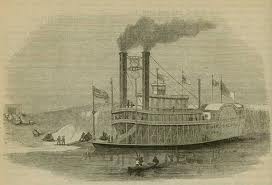 Journals and diaries offer observations, details and language that history books can not, which is why I love them for research. However, Steamboats of the Western River, a detailed history of steamboats, gave me my plot.  I read true tales of steamboats exploding, sinking, catching fire, and running aground. Who knew? Further research helped flesh out my characters and focus the plot. Soon Emma, Patrick, Twist, Mama, and Doctor Burton boarded The Sally May and months later Emma's River grew into a suspense-filled adventure on the :

“Look Emma!” Mama waved at her to hurry. “There she is.” The Sally May rose from the river as tall as a three-story building. The steamboat was white, with gold and black trim. Pendants and flags snapped in the breeze. Its name was written in red scroll on the paddlewheel housing.
Hand on her hat, Emma tipped back her head so she could see the top of the two chimneys. They belched thick smoke. Above the pilothouse, gulls dove and soared. Emma’s heart soared with them.

Oh how I love how an idea turns into a story! I'd love to hear your ideas--how did they turn into a story?

Alison--Great post! A lot of my stories started with something that really happened to me. Slickrock started with my journals of my time spent alone in the mountains, dozens of pack trips we took with our horses, the time we discovered a man, shot and bleeding, in a nearby pasture, and a story my vet told me concerning colic, smuggling and horses (true story). From these beginnings came the book.

As I write mostly mysteries, a lot of my ideas start with, "Wow, I bet you could hide a body in there," or some such ilk. The one I'm working on is the first mystery I've written with horses in it. I was at a show (AQHA), walking down the barn aisle and saw the pile of used shavings at the end. Suddenly I thought, "What if there were a pair of boots sticking out? Boots with a body in them?"

My latest book, due to come out in June, is the story of my horse, told in his voice, about how he was a champion, then broke his leg, and fought to return to the show arena. It's called From the Horse's Mouth: One Lucky Memoir. It's different from anything else I've ever written. I'm really proud of it.

Wait, Laura, you actually found a shot and bleeding man in a pasture??? Do tell the story.

Gayle--Love the title "From the Horse's Mouth"! Eat lots of hay. I had to to write two books in the Horse Diaries series which are also in the POV of a horse. (For kids) I hope you'll tell us more about the book when it comes out this summer.

Alison--Yes, we really did find someone shot and bleeding in a neighbor's pasture. And this became the opening scene in Slickrock. Maybe I'll do a blog post about it some day. Or you could just read the book....its pretty cheap on Kindle. But I think you don't read on Kindle?

Nope, no Kindle. I'd love to read a blog about finding the body and turning it into the mystery!

I love writing based on mine and other's experiences.

I'm in awe of you who are writing & publishing. Something I've always wanted to do, but have never found that "starting point".

HHmstead--it's never too late to start! Check out my last blog on Beginnings.

Christine--me too, except my life is so, well, boring, that I need to mine other folks' lives.