The Piper in the Graveyard

Every Memorial Day my husband would play his bagpipes in the old cemetery in Soquel to honor the veterans. We would show up there, Andy wearing his kilt and “clobber” as he called it, and he would play for an hour or so, taking breaks to rest his lungs. There were always a few people there, tending the graves of their loved ones—often they would come over and thank him. My son and I wandered around, listening to the piping and looking at the old graves. 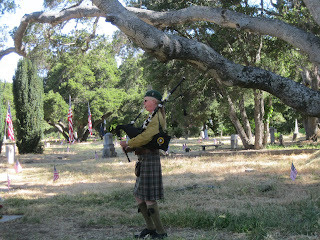 It was and is a peaceful, wild place, pleasantly overgrown, on the banks of Soquel Creek, and it felt good to be there. One year the man who owned the cemetery was there and thanked Andy. Later that day I told Andy, “I think I’d like to be buried there. Next year, if the owner is there, I’d like to buy our gravesites. Is that OK with you?”
Andy agreed this was OK with him, and the next year the owner was there and I bought three gravesites—one for each of us.
In the intervening years, Andy played his pipes there on Memorial Day and sometimes Veteran’s Day—and I learned that my great grandmother had once tended the graves in that cemetery. Every time I was there I had a peaceful feeling. My son and I would talk about the fact that some day we would be buried there. It all seemed very gentle and distant.
But last year my husband grew very ill with a rare and aggressive form of cancer. No treatment was effective, and it became clear that he did not have long to live. In the way of a brave soul, Andy kept on with his life, going to work up until a month before he died—and his death was quick and at a moment of his choosing. And no, I don’t mean suicide—assisted or not. I mean that he had the will to let go of his life, just as he had the will to keep going, undiminished, until he knew it was time to move on. He chose to die in my arms when we were alone together—as a thunderstorm poured down overhead. Just took one deep breath and did not take another.
When the man who was helping me take care of Andy arrived later, and I told him what had happened, he just nodded. “The great souls always pass in a storm,” he said.
The next day I made arrangements for Andy to be buried in front of the biggest oak tree in the old Soquel Cemetery—a place where he had often stood to play his pipes. As we had agreed beforehand, it was a green burial. No chemicals, no metal—just a simple coffin of woven bamboo. The hole was dug by hand, and his friends lowered his coffin into it by hand. Andy’s friend and piping teacher, Jay, played the pipes. We told stories of Andy’s life, toasted him with some of his favorite single malt whisky, and decorated his grave with beautiful begonias that he had grown.
Since then I go to the graveyard several times a week to put flowers from our garden on Andy’s grave. His sister and brother came to visit, and we bought a bench and placed it next to the gravesite. So I sit on the bench and talk to Andy. I see lots of things. A hawk alighted in the top of the big oak tree one day. A bobcat walked across the cemetery carrying something for her kits. Squirrels chase each other through the gravestones and ducks fly up and down the creek. As it always was, it is a peaceful place.
This Memorial Day Jay met my son and me at the cemetery. It was a gentle, sunny afternoon and we sat on the bench and Jay played his pipes. I had brought flowers for Andy’s grave, including begonias—and some unknown person had placed an angel there. Various people were there tending graves and thanked Jay for playing. Some recognized me and asked about Andy. It seemed hard to take in that last year he had been here playing and this year he was buried in the ground. But so it is. The human condition...
I cried a lot. But we smiled a lot, too. And told stories. I brought a bottle of Lagavulin and we toasted Andy. We poured a little whisky on the grave (my son said, “Papa would say that was a waste of good whisky,” and Jay and I both laughed). I gave Jay the bottle as a present, and my son and I drove Andy’s little red Porsche home.
As days go now, it was a good day. I think Andy was happy to see us all there and hear the pipes played in his honor. I was very sad—but I am always sad. And I could feel some sweet thing underlying the sadness. Love.
My love is still steady and strong, as I believe Andy’s love for both me and our son remains steady and strong. I will go and place flowers on his grave as long as I can walk. I will love him as long as I exist. Some day, not long from now, there will be a gravestone with a piper on it underneath the big oak tree. The words at the top, chosen by our son, will say “He played his pipes for the good of all here.”

Some day I will be buried next to him. 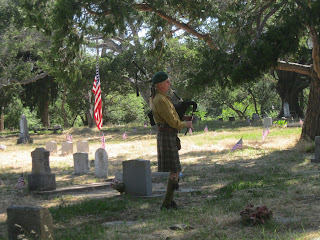 And so it is for the piper in the graveyard.

Laura, you are brave and strong to share your experiences with us. What a wonderful testimony to the power of all kinds of love.

Thank you RiderWriter and For What It's Worth. I don't feel brave and strong--I feel sad and tired. But at a certain point it became clear to me that I needed to share what comes to me. Losing someone you love--be it a spouse, a child, a parent, or a beloved dog--is part of the human condition. We will all face grief. And it can feel so very lonely. I share my thoughts in case someone, somewhere, gets a bit of comfort or an insight that is some help to them.

It sounds like he had a very good life. The only bad thing about his death is that it came too soon for you and your family. I hope I have enough strength to accept death with half the grace he had.