The title of this blog post is also the title of the book I’m currently reading. A present from a friend, the book is another collaborative effort between the woodblock print artist Tom Killion and the poet Gary Snyder. Both the words and the illustrations are equally beautiful and evocative of the California coast—where I was born and raised and where I hope to live until I die.
I particularly like the title of this book. I have always seen this coast as the wild edge of the world. I can’t tell you how many times I’ve sat on my horse, looking out over the Monterey Bay from the spot in the nearby hills that we call the “Lookout,” and thought that I was gazing out at the ragged fringe of the continent. If I could see far enough across the vast blue, I would see Japan. (The Lookout features prominently in my last two novels—“Going, Gone” and “Barnstorming”—for those who have read those books.) 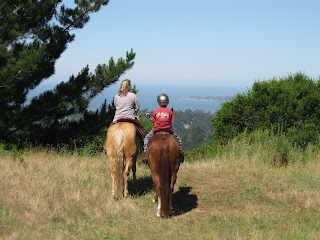 Anyway, I’m really enjoying this book about the California coast. Today I thought I’d give you a few photos of my own that illustrate what the “wild edge” is to me and some quotes from the book that touched me. I’ll try and attribute the quotes correctly. Many of them are by the poet Robinson Jeffers. I love his description of his wife, Una Call-- “more like a woman in a Scotch ballad, passionate, untamed, and rather heroic—or like a falcon—than like an ordinary person.”
Here, I think, is one of his last poems (1951), one that Tom Killion describes as something that “still might serve as a guide for all aspiring artists of the coast—poets, painters or woodblock carvers.” It’s titled “The Beauty of Things.”

To feel and speak the astonishing beauty of things—earth, stone and water,
Beast, man and woman, sun, moon and stars—
The blood-shot beauty of human nature, its thoughts, frenzies and passions,
And unhuman nature its towering reality—
For man’s half dream; man, you might say, is nature dreaming, but rock
And water and sky are constant—to feel
Greatly, and understand greatly, and express greatly, the natural
Beauty, is the sole business of poetry.
The rest’s diversion: those holy or noble sentiments, the intricate ideas,
The love, lust, longing: reasons, but not the reason.

And “Orion in December evenings was strung in the throat of the valley like a lamp-lighted bridge.”

And “There is yet one ocean and then no more, God whom you shine to walks there naked, on the final Pacific, not in a man’s form.
The torch answered: Have I kindled a morning?
For again, this old world’s end is the gate of a world fire new, of your wild future, wild as a hawk’s dream”

And here, in a poem about Jeffers ghost by Robert Hass:

“He shuddered briefly and stared down the long valley where the headland rose
And the lean gum trees rattled in the wind above Point Sur;
Alive, he had littered the mind’s coast
With ghosts of Indians and granite and the dead fleshed
Bodies of desire. That work was done
And, whether done well or not, it had occupied him
As the hawks and sea were occupied.
Now he could not say what bought him back.
He had imagined resurrection once: the lover of a woman…

So she burned and he came, a ghost in khaki and stunned skin,
And she fled with him. He had imagined, though he had not written,
The later moment in the pasture, in moonlight like pale stone,
When she lay beside him with an after-tenderness in all her bones,
Having become entirely what she was, though aware that the thing
Beside her was, again, just so much cheese-soft flesh
And jellied eye rotting in the pools of bone.
Anguish afterwards perhaps, but he had not thought afterwards.
Human anguish made him cold.

He told himself the cries of men in war were no more conscious
Nor less savage than the shrill repetition of the Steller’s jay
Flashing through live oaks up Mal Paso Canyon
And that the oaks, rooted and growing toward their grace,
Were—as species go—
More beautiful.”

I am a child of California’s wild edge.
If you want a tame creature
To sit by your side,
I am not that thing.
Wind and water, stone and sky—
These speak to me.
The female moon longs
For Orion the archer,
As he strides across the night.
This would be you and me
In that dark room.

There is a Tom Russell song that Andy used to sings bits of—about the coast near Big Sur. The part I remember goes like this:

“The south coast is a wild coast and lonesome
You might win a card game in Jolon
But the lion still rules Amaranca
And a man there is always alone.”

It’s a sad song—but it sticks in your mind.

So yeah, it all seems to fit together. And here are a few photos I’ve taken of horsemen on the wild edge-- just for fun. 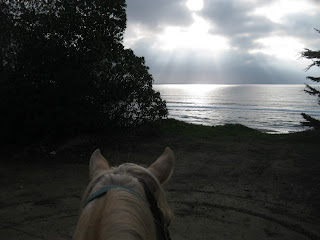 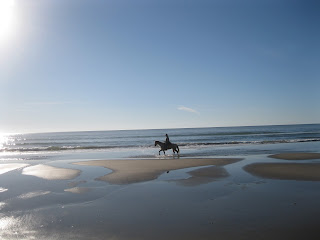 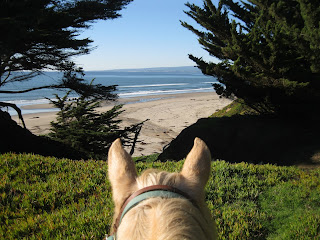 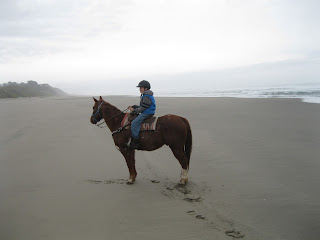 "He had imagined, ...
The later moment in the pasture, in moonlight like pale stone,
When she lay beside him with an after-tenderness in all her bones,
Having become entirely what she was"

I just published my first horse book called Chase, and I was wondering if you'd be interested in reading?