So once again, apologies for the lack of posts. My life has been interesting and magical, but it is beyond my current abilities to put many words down about it. So today I can give you a few snippets and quotes and that’s about it.

Lately I have been sitting by my pond in the evening, drinking rye whiskey and soda, and reading “The Dharma Bums” by Jack Kerouac. How did I miss this book in my youth? I read “On the Road,” but not this one. And this one is magical.

I found the book because a friend gave me a book called “Tamalpais Walking”—a collaboration between the woodblock print artist, Tom Killion, and the poet, Gary Snyder. I posted about this book last time (I Know, No Posts). The book had a lot of back story about Gary Snyder and Jack Kerouac and explained that Gary Snyder is the “hero” in “The Dharma Bums”—a character named Japhy Ryder. So I decided I needed to read The Dharma Bums. And it arrived a few days later—thank you, Amazon.

For the last few evenings I have been sitting by my pond and reading this book. And laughing out loud. And being amazed. So many things seem to be coming together. 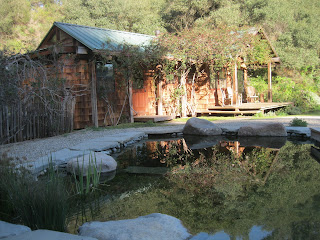 The book reminds me of sitting by Burgson Lake in the Sierras when I was 22 years old, miles from any other person, reading “Roughing It” by Mark Twain, and laughing out loud as I drank cheap jug wine and watched the sun go down. 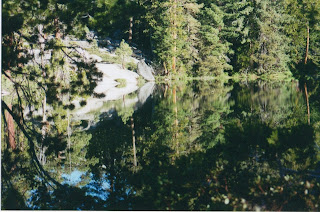 The passages about the Sierras take me back to the summers I lived in those mountains—one year alone by Burgson Lake, one year working at Kennedy Meadows pack station. And all the many horseback pack trips over the mountain passes that came later. When Japhy and Ray go into the Sierras out of Bridgeport, Bridgeport comes back to me as vividly as if I were there yesterday.

And there are so many lines in the book that are things that Andy used to say to me. I know he read this book—but I didn’t realize that the lines came from the book. As Ray tells Japhy what he thinks of other people: “Equally empty, equally to be loved, equally the coming Buddha.” Andy used to say that to me all the time.  It all feels so connected.

Anyway, hey, if you haven’t read “The Dharma Bums,” read it. It’s a whole lot of fun.

And, just because I like them, here are some quotes that my dear friend, Shannon Schierling, posted on facebook. Thank you, Shannon.

“I have come to accept the feeling of not knowing where I am going. And I have trained myself to love it. Because it is only when we are suspended in mid-air with no landing in sight, that we force our wings to unravel and alas begin our flight. And as we fly, we still may not know where we are going to. But the miracle is in the unfolding of the wings. You may not know where you’re going, but you know that so long as you spread your wings, the winds will carry you.” – C. Joybell

“Life will break you. Nobody can protect you from that, and living alone won’t either, for solitude will also break you with its yearning. You have to love. You have to feel. It is the reason you are here on earth. You are here to risk your heart. You are here to be swallowed up. And when it happens that you are broken, or betrayed, or left, or hurt, or death brushes near, let yourself sit by an apple tree and listen to the apples falling all around you in heaps, wasting their sweetness. Tell yourself you tasted as many as you could.” ~ Louise Erdich, The Painted Drum

Lovely, Laura. Lovely Laura. Deep and thought- provoking. We've all felt loss, fear, aloneness, grief. The words you shared show us we're not alone, and we'll somehow make it through to the light. Thank you. Mary Shaull

Thanks, Mary. Glad you you liked my brief post. I hope you and yours are all doing well.

Love the photos & love the quotes! Another book for my "must" read list!

Thanks, Connie. Glad you liked it.

Wonderful, I am going to also share this on my FB page.