I promised this post months ago, and ending up posting other items. While this doesn't have much to do with horses, I'm hoping you'll enjoy it just the same. 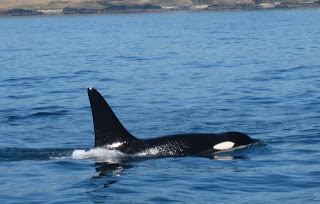 Orca Whales (also known as Killer Whales) have long resided in the Puget Sound area. Right now there are three resident pods of whales (a pod being a family and resident meaning they don't migrate elsewhere). Unfortunately, their numbers are dwindling each year for various reasons, such as a decreasing food source and pollution.

As a one-time boater, my former husband and I made many trips to the San Juan Islands. Each time we were fortunate enough to see whales. Usually, we didn't look for them, they seemed to find us. Sometimes, we'd see huge groups of whale-watching and personal boats off in the distance searching for whales, while we'd be sitting in the middle of a large group of them as they cavorted and played around us. 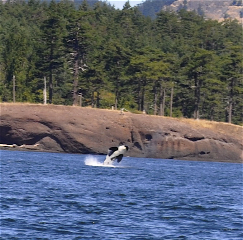 This summer, my husband and I took a trip to the San Juans with some friends on their 43-foot Tollycraft yacht. Both my husband and the wife of our friend had never seen whales in the wild. We hoped to see them, but as responsible boaters we were also aware of the effects of crowds of people in boats harassing the whales and the current laws requiring that a boat stay 200-yards away from the whales if at all possible. 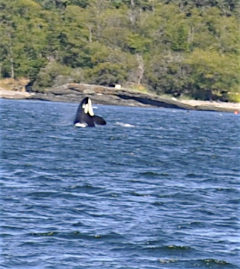 We saw the huge fins of whales in the distance and shut down our engines, binoculars ready, and well over 200 yards away. At first. The entire pod headed straight for us.

An hour later, we were still surrounded by whales. Every time we'd start our engines another group would swim by and we'd shut down again. After two hours of being entertained, we finally powered up and went on our way. A week later on our way home, we happened upon the whales again. Then a few weeks later on a family trip to the San Juans, we went on a whale-watching tour with my stepdaughter and her boyfriend. Again, more whales. All in all, it was a good year for whales. And an incredible year for those of us privileged to witness them.

I started to write a passage about how the whales affected me and all those fortunate to see them in person. Instead, I grabbed a passage from one of my first books, The Dance. In this passage, Rico is a cynical celebrity dragged along on a whale-watching expedition against his will. How Rico feels about these magnificent creatures, pretty much sums it up.﻿

Rico slouched against the stainless steel rail, observing the whales with disinterest. Several Orcas of differing sizes circled the boat, moving closer with each pass. They frolicked in the water, giving Rico and Mariah a private show. Eva must have sent them—the guardians of his soul. Sure. What crap.
One of them leapt out of the water with amazing ease and grace, coming down so close to them that he backed up a step for fear of getting wet.
He had to admit that the huge black and white suckers were impressive.
In spite of his perceived boredom, he couldn’t take his eyes off them. Their lives seemed so simple and pure, his was so complicated and messy. They probably worried about catching their next salmon and keeping their babies safe. It’s not like he’d know. He wasn’t a whale researcher. How the heck did whales do it, anyway?
Another large Orca surfaced within twenty feet of the yacht. The animal’s fin appeared to be as tall as he was. The huge beast rolled on its side and stared straight at him with one large eye. Rico leaned over the rail for a closer look. He stared, mesmerized.
Nothing made sense, yet everything made sense. He felt disembodied, as if he observed everything from a remote position, as that large sea-going mammal worked its magic. It called to him, spoke to his soul. All those things that troubled him so deeply seemed so insignificant. In one profound moment, he realized that nothing mattered as much as moments like this.
Rico held his breath, afraid to break the spell. A delicate thread connected him to the world around him. He clung to it, like a dying man clings to his last breath. In a flash of insight, he understood the simple complexity of life and the delicate balance that held it together. Peace and contentment he’d never known filled him, surrounded him, cradled him. He floated free of his human burdens.
It was too much. The depth of his feelings frightened him. He looked away, breaking the contact. Shaken, he gripped the railing. The intensity of the experience seemed surreal.
The Orca launched out of the water with amazing dexterity and grace. It landed with a huge splash, sending salt water flying everywhere, including on his face. Rico swore the damn thing laughed as it dove under the boat and breached on the opposite side. He’d never forget the sound it made as it blew spray into the air. He swiped at the water on his face.
The large Orca gathered his pod together and swam away from them. Their fins glistened in the evening sun. Water lapped at the hull of the boat.
Rico wiped a tear from his face as whales cavorted in the distance.
Mariah dabbed at her eyes. “Oh, Rodrigo, Aren’t they awesome?”
Her unrestrained enthusiasm was contagious. “Yeah, they are, baby. Breathtakingly awesome.” This time he meant it.
They moved him in ways he couldn’t put in words. The whales had penetrated his cynical armor and left him humbled.

Posted by Jami Davenport at 2:09 PM

I am so glad you wrote about the whales and posted photos. What an incredible experience--one I hope one day to experience!

Jami - I loved your excerpt. It's hard to describe how being close to these animals makes you feel, but you've done a good job.

I've only seen killer whales from afar (and they're beautiful) but I've been up close to humpback whales in a raft off LaHaina, in Hawaii, and heard them singing underneath the water. Unbelievable experience! They do touch you, and it's a very moving experience. Thanks so much for sharing!

We took a trip to Alaska and were able to kayak out fairly close to humbacks. I'd hoped to see orcas as well, at some point during our trip, but just didn't happen. I will always remember the whoosh of the humbacks as they gracefully surfaced. It truly gives you a feeling of awe and wonder. My husband took tons of photos which we have displayed proudly on our walls. So appreciated your post and the pictures!

Thanks everyone. I never tire of seeing the whales and am so grateful I've had so many opportunities over the years.