I purchased my first horse, a big flea-bitten gray, when I was twenty-three. Stoney was a sweet, wonderful guy. He was green when I bought him, but he advanced quickly. He was usually very solid and steady in the show ring and did well in low hunter and pleasure classes, often earning several champion titles in one show. He was also well behaved when I took him to some combined training events. But there was one place where his ornery side came into play—out on the trail . . . alone.

In company, he was great. Stoney preferred to lead. He was bold and confident, and riding him felt like driving a bulldozer. “You want to go up that ten-foot muddy bank out of the river?” “Sure, no problem.” I’d point him, and off he’d go.

“What, no trail?” “Not a problem.” I might get scratched up with briers and gouged by tree branches, but none of this held him back.

And he loved river crossings. He’d stand in the middle of the current while schools of fish swam between his legs. I have no idea what he thought they were, but he’d cant his head and watch them dart beneath his belly. And I’d have to be careful, because he liked to roll, especially when it was hot. I would have loved to have taken him for a swim, though we never had that opportunity.

But when we set off alone, I never knew if I’d be walking home or riding because he had this nasty habit of bucking as we came out of stream crossings or after jumping a log. He didn’t get me off much, but when he did, he’d gallop for home.

I remember this one time when we were out in the woods, and he started bucking after we jumped a log. He put his nose to the ground and pulled me right out of the saddle. I was actually straddling his neck as he continued to buck down the trail, and it was then that I made the decision to bail instead of risk slipping beneath his hooves. I lunged to the side and hit the dirt, and off he went down the trail. I ran uphill and almost caught him as he whizzed by on the switchback. When I’d finally trudged back to the stable, I couldn’t find him and was afraid he’d remain forever hidden in a dense corn field. But, he hadn’t stayed out in the open to pig out. He’d squeezed into the stall we used to store hay and was chowing down on a bale of alfalfa.

We had some adventures in groups, too. My boss was a wild woman in the saddle. She took a bunch of us novices on a cross-country gallop. Stoney was so excited by this barely-controlled, group gallop, I spent much of the run trying to keep his bucking under control. We slowed to a canter when we reached a wooded trail. My boss was an excellent horsewoman. She was riding Pocket, her son's beautiful bay hunter. As he cantered down the trail on autopilot, she was twisted around in the saddle, watching her band of excited students, when I noticed a heavy low branch jutting across the trail. I warned her just in time. Otherwise, she would have been knocked right off.

The land surrounding the horse farm where I worked at the time bordered Maryland’s Patuxent River, and it was extremely hilly and wooded. When I first purchased Stoney, he had no clue how to get us to the bottom of some of these hills except to make a mad dash down them. He’d stand at the top, worried, shifting his weight; then he’d take a deep breath and just go. I eventually got him to understand that he could take his time, and those big scary hills lost some of their menace. 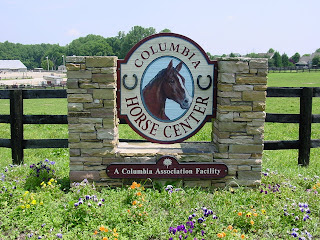 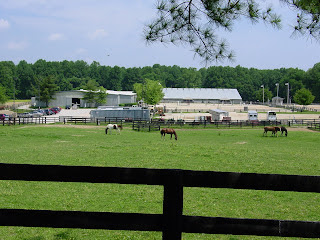 My fictitional Foxdale Farm, where Steve works, is based on the Columbia Horse Center.

The hours I’ve spent riding, especially cross country, show up in my fiction. Here’s a little excerpt from AT RISK, where Steve has taken a school horse out for a nighttime ride. One of the boarders had noticed a six-horse that resembles the trailer used in a horse theft, and Steve is going to check it out: 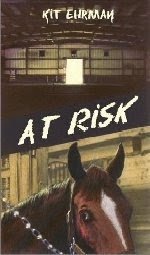 Wooded hills sloped upward on both sides of the river, and except for a faint gurgling, where fast-moving water tumbled over a natural dam, the meadow was quiet. I might have found it peaceful except for the night’s objective. I looked at my watch. Seven-fifty-five. I had two hours before the last lesson was over, before Karen would check to see if we’d made it back.

When we came to a stretch of meadow where the footing was safe, I bridged the reins together over the crest of her neck--to act as a brace in case she stumbled--then crouched low over the saddle. She automatically lengthened into a ground-covering canter, the instinct for speed there for the asking. Her body rocked beneath me, her muscles straining, footfalls muffled, breath coming faster, louder, filling my ears. I pressed my knuckles into her mane and relaxed into her stride. The brisk air stung my face and pulled tears from the corners of my eyes. The ground beneath us was a blur, the speed intoxicating for both of us.

Where the meadow narrowed into a track not much wider than one of the old logging roads, with trees thick on both sides, I brought her back to a walk. Jet swiveled her ears and tossed her head in irritation.

“Sorry, girl. Can’t run here.” I patted her neck. Steam eddied through her coat, curling upward in tendrils, and I could smell her sweat, stirringly primitive. A link to the past. The result of countless years of man and horse working together.

I owned Stoney until his death at age 31. He was a great guy, and his memory lives on in my writing.

I enjoyed reading about your horse, Stoney, Kit. Just this last December I lost my oldest horse, Burt, who was nearly forty--a horse I'd owned since college-- so I can relate to keeping these beloved old guys and how much they mean to us.

I'm sorry for your loss. It's so hard, but I'm sure Burt lives on in your thoughts, and I'll bet he shows up in your writing from time to time. He must have been a sturdy old boy.