The Real Horses Behind the Books 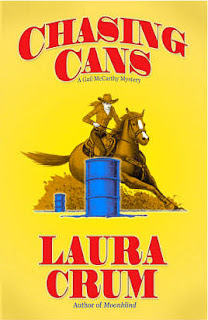 rotagonist, acquires a pony for her child. This particular plot device never would have occurred to me were it not for the fact that several years ago I acquired a pony for my little boy. I had never owned a pony before and Toby was an education to me. I found the little critter so endearing that I just had to write about him, and Toby our pony is faithfully described in Chasing Cans, though the way in which Gail acquires him is rather different than the way in which I came by the real Toby.

This is often the case with my equine characters. Over the course of my ten mystery novels, I’ve based virtually every horse that Gail encounters, owns or rides on real horses I’ve known. Gunner, who is Gail’s main mount through most of the books, is modeled on my own horse, Gunner. He is accurately portrayed as to appearance (a fifteen-three hand Quarter Horse gelding with white socks, a blaze and a blue eye), personality and quirks (the real Gunner is a big spook, as is Gail’s “Gunner”), but the living horse’s history is a bit different from the fictional one.

Gail acquires her horse Gunner when a veterinary client refuses to spend the money and time it would take to allow the horse a chance at recovering from severed flexor tendons. (This occurs in my first novel, Cutter.) Gail takes the horse to save him from euthanasia. (The story is also based on a real horse; it just wasn’t Gunner.)

The real Gunner’s life history is rather different. I acquired him as a three-year-old, just as Gail did her Gunner. I was twenty-five years old and working for a prominent reining/cowhorse trainer who shall remain nameless. As his assistant, I rode a string of eight horses every day; these were horses that, for whatever reason, he didn’t care to ride. Some he considered less talented, some were in the barn just to be broken and the owners weren’t interested in showing them, some had a bad attitude (poor me)…etc. Gunner was in my string because the trainer wasn’t collecting training fees on him; the horse was just there to be sold. Gunner was a well-bred and talented cutting and reining prospect, and the trainer thought that not only would he collect a fat commission when he sold the horse, he might also be able to place him with one of his own clients who would then pay the trainer to ride the horse and enter him in the major cutting and reining futurities. Needless to say the price tag on this horse was high. He was probably the best colt I had in my string; he was also a very likable horse.

Just as he is described in my books, Gunner had a friendly, clownish personality, a willing and cooperative nature, and tons of athletic ability. He came to me with about thirty rides on him, and I took it from there. He was always an easy horse, never prone to bucking or other negative behaviors, other than his penchant for unexpected sudden twenty foot sideways leaps whenever he saw something worth spooking at, which was often. He never dumped me (and never meant to), but it was a near thing more than once.

Despite the swerves, I loved riding Gunner. It amazed me how quickly this colt came on and how much “cow” he had. As the months passed with no buyer coming up with the purchase price, I grew fonder and fonder of this horse. I began hoping desperately that no one would buy him; I dreaded his removal from the barn or seeing him placed in the trainer’s string (by this time I’d had lots of experience with the well known trainer’s rather harsh methods and didn’t want to see this kind, willing colt subjected to them.)

Eventually the day came. A prospective buyer was due to arrive, one who would surely buy Gunner. He was a rich man; the purchase price would mean nothing to him. He was known to be looking for a good futurity prospect and to like Gunner’s breeding. The trainer was very keen to make the deal. I gave Gunner a bath with tears running down my face. That morning, despite the fact that I had no idea where I would get the money, I told the trainer I would give him the full price for the horse and wrote and handed him a deposit check.

I’ve never regretted this decision. I borrowed the money to buy Gunner and I left that trainer’s employment almost immediately thereafter. I trained Gunner myself and showed him at 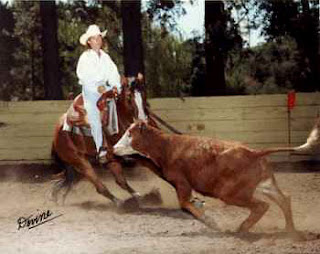 some of the reining and cutting futurities as a three and four year old, winning some very minor awards. Gunner became an accomplished cutting horse over the years and I won many events on him eventually. Later I trained him to be a team roping horse and competed on him for several years at ropings. I still own Gunner; he’s twenty-eight, sound, and retired in my sixty acre pasture. He’s been my friend the whole time.
Photo: Laura Crum and Gunner winning the cutting class at the Santa Cruz County Fair.

Gail’s Gunner is given a slightly different history. She never uses him as a cutting horse, but does compete on him at team roping in Roped, my fourth mystery novel. In Slickrock, the fifth book in the series, she rides him on a major pack trip through the Sierra Nevada Mts of California. Though this pack trip is based on many pack trips that I made 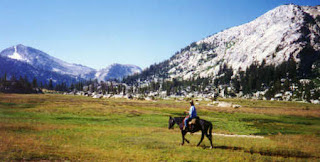 over those same mountain passes, the mount that I used on those trips was Flanigan, a horse I also rode for years and loved dearly, just as I did Gunner. Flanigan loaned his skills as a team roping horse and his quirky personality to Burt in my third novel, Roughstock.

Photo: In the Sierra Nevada Mountains of California

So the horses in my books are real horses, although almost all of them are in some ways combinations. One horse’s personality and appearance grafted on another’s history, so to speak. (This is the way I create my human characters as well. ) And though I give Gail some of my own life experiences, her responses are uniquely her own. Thus my mystery series is a tapestry of fact and fiction, which I hope will engage readers in much the same way that the real horses and life changes have engaged me.

Fantastic post, Laura! You've had some wonderful experiences and dear equine friends to treasure, and I admire your guts in purchasing the real Gunner when you had no idea where the money would come from.

I'm so glad you and Gunner ended up together! You love him so much and you two are a great team. I admire your talent staying on during those spooks. I'd have landed in the dust!

My current horse, Gailey, is the equine star of my latest manuscript, too. Like you, I, too, got a loan to buy this horse. She was just too nice to pass up.