First of all, I want to welcome Jody Jaffe as a regular member of EquestrianInk. Jody writes equestrian mysteries, and we are very happy to have her here.


Today, we are pleased to have a guest blogger, Sandy James. Sandy is a writer and races harness horses.

SANDY JAMES
http://www.sandy-james.com/
http://www.geocities.com/hockeyjam415@sbcglobal.net/
Sandy is a fourteen time finalist in RWA contests who recently signed with Maureen Walters of Curtis Brown, Ltd. She lives in a suburb of Indianapolis where she teaches high school social studies. The James Harness Racing stable races mostly at Hoosier Park and Indiana Downs, but they race horses in Canada as well. Her first book, Turning Thirty-Twelve, will be released by BookStrand in January. Her racing story, Murphy's Law, will be released by BookStrand in March. 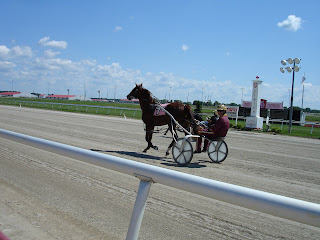 not too long ago. I’m not sure I’ve ever been prouder of one of my racehorses. Oh, sure, our stable has had horses that have raced faster. We’ve had horses who earned quite a bit of purse money. And there have been some I’ve really become attached to. But Heart’s Prince is unique. Let me tell you why.

My husband, mother, and I owned a racehorse named MyHeartStoodStill. She had the heart of a champion. You never saw Heart give in, and I think she would have raced on three legs if that was all God gave her. She raced well at our home track, Indiana Downs, and when that meet ended, we sent her to a trainer we were working with in Ontario. The trainer did a good job, but Heart seemed to be struggling. When the husband and I went up to Windsor to watch her race, we went back to the paddock after to see her. Things weren’t good. My poor mare was blowing so hard, her nostrils flared almost impossibly large. I wanted to throw my arms around her and make it all better. We sent her to the veterinary school in Guelph.

Poor Heart seemed to have developed a sort of exercise-induced asthma. She wasn’t going to be able to race any longer. I’d made the mistake of getting attached to her, and I couldn’t bear the thought of her ending up pulling some Amish buggy. I put my heads together with another trainer and decided to breed her. A friend near Ladoga, Indiana, had a stud he was standing for only a few mares. Problem was we didn’t have a farm to keep Heart at while she waited out the birth. Problem solved. The breeder said he’d be glad to keep her with his broodmares. Heart only needed to be covered twice before she conceived.

I “saw” Prince before he was born. The breeder brought the ultrasound to the track when one of his horses was racing. All I saw was a big black dot, but I have to admit, it was thrilling to know that a new horse was in my future.

Heart had an easy birth, and my mom and I went to visit the day after Prince was born. We hadn’t decided on a name. I wanted “Midlife Crisis” since owning horses was literally my husband’s midlife crisis. Second choice was “Freudian Slip” because I teach psychology. My mom took one look at that little chestnut colt and said he looked like Bambi. Since the joke in the Disney movie was that Bambi was going to be prince of the forest, mom got it in her head that we should call him Prince. I just rolled my eyes, but she wouldn’t give it up. So we finally settled on Heart’s Prince.

He trained to harness well and we had high hopes for him. He even had a start or two as a two-year old, but we weren’t very encouraged. Prince had a habit of getting rough gaited, and we were starting to wonder if we might just have another saddle horse on our hands. But the little guy has turned his three-year old year into a profitable one, starting with that first win. I had never been prouder walking into that winner’s circle. My colt had won. My colt!

When I write my romances about racing, I try to throw in all the love I have for the animals and the sport. My first story about racing will be released by BookStrand in March. I sure hope the passion I have for standardbreds comes through in Murphy’s Law.

When our horses are ready to retire, my sister adopts them and trains them as saddle horses. We still have MyHeartStoodStill, and she is enjoying her "retirement." Standardbreds make fantastic pleasure horses, and I strongly encourage adopting one when his or her racing career ends.

Posted by Jami Davenport at 8:13 AM

Thanks for joining us. We loved to have. I'm looking forward to some additional posts from you.

Thanks, Jami! I was thrilled to "guest" on your great blog! I'll send more stories your way soon!

I used to foal out Standardbreds on a huge farm in Pennsylvania, and I can attest to the fact that they are sensible, wonderful, kind horses. I would highly recommend them to anyone looking for a nice horse.

Standardbreds are so sturdy and dependable. Racehorses especially make great saddle horses. They're used to people and easy to work with. Prince is getting ready to get some time off for the winter. I just might sneak a saddle on him to see how he handles it. ;-)

I have just got a standardbred off the track. Well not really just but back in July and he has been spending time learning to be a horse and get used to things. I was wondering if you have any tips on retraining him as a riding horse?

First, congratulations on adopting one fo the finest breeds out there!!

Standardbreds are so used to being working animals, it sometimes takes them a little while to acclimate to their new relaxed environments. If you've been giving him plenty of love and turn out time since July, he should be ready to saddle break by now. And the process is usually easier than it is with green colts.

Since a standardbred is used to having a harness on his back, he probably won't pitch a fit with the saddle. Just be sure the first person to try to ride is a rider experienced in breaking horses -- especially since standardbreds tend to be so very tall. That's a long way to fall.

All of our retired animals gave us very little protest being broken to saddle, and I hope you have as good a luck with your new pet. Please keep us posted on how you do with him!