When my hunter decided he was a show jumper 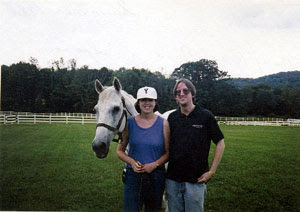 
Today I flew into to visit my family for the first time in five years. Although I love our home in the Midwest, the years I spent showing were primarily in , and and on the drive from the airport all I could think about was the fantastic shows Topper, Spencer and I went to through the years.

There is a great town near my family’s home, , which has a large C rated show every year. When I had only had Spencer about a year and I was still introducing my husband to the wonderful world of horse shows we went to the show. Unfortunately, Spencer was very excited to be there and I was still at the beginner/intermediate stage at that time. Undaunted by this less than idea combination, I cheerfully directed my husband Eric onto the show grounds to my barn’s trailer.

Being relatively new to showing I had spent an inordinate amount of time on my tack and show boots getting the gleam my trainer said was absolutely necessary. I lavished attention on Spencer, grooming and tacking him up and went to work on putting myself together. While I was sitting on the back of our SUV totally involved with getting my outfit on I handed Spencer’s reins to Eric and said “just hold him a minute,” which seemed simple enough at the time.

Unfortunately, the weather was very windy and it had poured the night before so mud was everywhere. This in combination with Spencer’s show excitement level had him prancing like he was ten years younger. At the moment I was tugging on my new, excruciatingly tight boots I heard Eric call “He’s standing on my foot.”

Being otherwise occupied, I yelled back “Just shove him off.”

When I emerged a moment later Spencer was snorting wildly with his foot planted on top of Eric’s, stared wild eyed at a nearby truck. Eric had made the mistake of sitting down while holding Spencer’s reins and was at an angle where he couldn’t get any leverage to shove Spencer off. Eric was fine, but I heard about the horseshow shaped bruise he’d had on his foot for years!

Having survived the scary truck we headed over to my first class, a low hunter division. The jumps weren’t too high, maybe two-six to two-nine, but the ring was a sea of mud. Spencer pranced in like he was still competing in Medal/Maclay. Now feeling a little nervous, I started my course. Sensing I didn’t have full mastery of the situation, Spencer decided he needed to take charge for Mom, pulled the bit between his teeth and took off! I guess I’d forgotten to tell him there were no time faults in this division.

Thus, my husband’s first large show experience was watching his wife a total passenger as Spencer leaned almost horizontal into the muddy turns and sailed over each jump with tons of room to spare and me hanging on for dear life! I vaguely heard my trainer’s shouts to slow down, but if she wanted to talk to the boss, she should have been calling to Spencer instead of me.

Needless to say we didn’t win, but Eric had stories to share with our friends for years. Still, being back here during the height of autumn with the leaves so many brilliant colors brings back reminiscences of that day which are filled with laughter and love. (Okay, I’ll admit while I was careening around the course on Spencer my feelings were closer to terror.)

Still, I’m figuring both Topper and Spencer are up in heaven watching me show my daughter the local horse country and saying ‘Remember when, Mom?’

My thanks to everyone who gave me such wonderful advice regarding the more active new horse my daughter’s trainer wanted her to ride. I asked the trainer to let her continue on one of the older, small beginner horses for now and she agreed. My daughter still rode a new pony, but this old girl was as calm as can be and my daughter’s smile was ear to ear. She’s back to thinking about riding only as a joyful activity!

Happy autumn everyone and many happy rides!

www.marypaine.com
Posted by Mary Paine at 11:43 AM