The Gift Horse and Random Stuff

First of all, thanks for all the comments on my last post. I'm sorry I didn't comment back, but I've been sick and didn't feel much like being online. So for everyone who commented, I'm sorry I didn't get back to you. I'm still a little under the weather.

Latigo Liz, yes, you're right, it wasn't really a "beginner" class that Buck was teaching in the morning. My friend kept calling it that, so I just picked up on that terminology. What horse were you riding? I didn't go back on Sunday, but my friend did and really enjoyed it, even more than the day before.
******
I did want to share my new cover and blurb with all of you for my book coming out in February. BTW, the horse on the cover is my very own, sweet but opinionated, mare, who's been featured in many of my posts. Photo courtesty of Carolynn Bunch Photography. 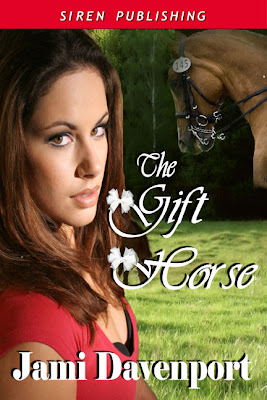 Never look a Gift Horse in the mouth?

CARSON REYNOLDS would dispute that statement. After all, it was a gift horse that got him into this mess in the first place. Carson has never backed down from a challenge, but he’s never faced a challenge like this one. It’s the project nobody wants. It’s doomed to fail from Day One because of lack of money, lack of planning, and no lack of a difficult, interfering sister. Carson’s mission is to transform a run-down horse farm into THE premium horse training facility in the Pacific Northwest and transform the disorganized resident horse trainer with a penchant for self-sabotage into a confident, professional equestrian of international caliber. Unfortunately, City Boy Carson doesn’t know one end of a horse from the other, and the large creatures scare the heck out of him. His situation is compounded by a love-sick, 1500-pound mare with a crush on him , his growing attraction to the grungy horse trainer, a disruptive sister who insists the trainer be fired, and a demanding father who has lost faith in his son’s abilities.

Tired of running from herself for six years, SAMANTHA MACINTYRE has returned to the scene of a horrific barn fire allegedly caused by her carelessness. She accepts the head trainer position at that run-down facility with the hope of defeating her demons, proving her innocence, and earning a permanent position at the new equestrian center. With lofty aspirations, but no money and no horse, Sam will do anything to ride the talented, though difficult, horse Carson received as a birthday gift from his family. But first, she must pass the test: compete the horse for one season, impress Carson, and best his sister’s preferred trainer.

As Sam gets closer to the truth regarding the cause of that long-ago fire, small mishaps begin to escalate into larger, more serious, accidents. Carson’s horse knows the real perpetrator, if only those dimwitted humans would listen. With no where else to turn, Sam confides in Carson and together they delve into the actual cause of the fire. With the help of an opinionated equine, they face a surprising reality--that love is more important than ambition, money, or blue ribbons.

Posted by Jami Davenport at 8:27 AM

I was on the little bay Arab in the morning class. She was slightly off in the right front, but did fine for the 4 days. I’ll be posting my report about the clinic on my blog soon.

I love the picture of your horse on your cover. What a beauty! Was the photo taken at a show?