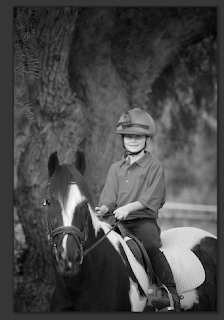 I wrestled a bit with the title for today's blog. It was between "Wishing They Could Talk," and obviously I settled on "Know Thy Horse." I did so because I realize they're never going to be able to talk to us, but they do communicate with us. The key is being able to translate their specific language, and I believe each one of them has individual ways of communicating with us. Some nicker, some whinny, some kick up their heels and run like hell, etc.

Well, I didn't "listen" to my daughter's pony Mister Monty too well last weekend. Little Monty is a good guy. He takes great care of my little girl. He packs her around, is a good teacher, only gives her enough of a test when he feels she's ready, and he has one of the kindest eyes I have ever seen on a horse. He has an occasional buck in him, but never with the kid on him. He gets ridden six days a week and a turnout on the 7th. We do our best to keep him happy and so far I think it's working.

Last weekend though, my little one got up on him for Pony Club. hHe'd been ridden the evening before by her and the day before that by the trainer. He'd been out everyday, so none of us felt he needed lunging or a turn out.

Walk, trot around the ring was fine. He looked a bit strong but my daughter is a good little rider and none of us were concerned. And, then she had to canter...Mister Monty threw out a little buck and was faster than usual. The kid stayed on. The teacher had her bring him down and start over. This time, the pony let out a few good bucks. The kid still stayed on. I was scratching my head and so was her regular trainer. We were both about ready to tell the pony club instructor to bring Monty and my daughter out so the trainer could work with him, when the little rascal took off around the ring and pulled a full on bucking bronco act. This time the kid came off. We dusted her off, gave her a hug and were all relieved that she was fine. However, I had this feeling in my gut that said something was wrong with Monty. On the flip side of that feeling, I was pretty irritated with him that he dumped my little girl.

The trainer took the pony and my daughter into the round pin and they lunged him for quite some time as he bucked and ran and bucked like crazy. Then the trainer got on him and rode him for a bit. Then my daughter got back on him and by now he was a perfect gentleman. Yeah, well...this is the part I should have listened to my gut, and the pony. We get him cooled down and put away. About thirty minutes later, I go back in to get my horse out (she is stalled next to him), and Monty is panting and sweating. I took a listen on either side of his gut--and you probably know what I heard--nothing. Monty wasn't trying to be a nasty guy in the ring with his kid, he was colicking and trying to run away from his pain. He was trying to tell us that he felt miserable. Let me just say that I felt horrible and so did our trainer--really, really horrible. Thirty minutes later my vet was there oiling him. Thankfully, Monty was much, much better by the next morning, and he's completely back to his sweet self. I am, however, still feeling like a bad mom--and boy, have I learned my lesson: "If you're horse isn't acting like your horse, start asking questions."

I did tell Monty later, "I know you felt bad, but you have to find another way to tell us, rather than dumping your kid."

I'd love to hear from readers about their pet communicating experiences (they don't have to be about horses). I do think animals "talk" to us, but sometimes we don't really listen. I, for one, am going to work on my listening skills.

I had a substitute instructor for my last riding lesson about 6 years ago - the stable owner. My usual instructor had to go out for bedrest for a problem pregnancy, so the owner filled in.

To make a long story short(er), she made a tack change that I could tell that the lesson horse didn't like. I tried to talk her out of it. I could tell he didn't like it. But she didn't care what I thought. And refused to read him.

So, he was grouchy and fought me. Not the best afternoon for a nervous rider. I decide that she didn't have my best interests at heart and stopped going there.

Michele, I had a similar experience with my horse Plumber. One evening, for no reason I could see, he was charging around his corral like a demented thing and it looked unnatural to me. When he came to a stop he was shaking. I called the vet. Come to find out he had a sudden high fever caused by a virus. I was suprised the discomfort would cause him to run, but the vet said that horses will respond to pain and discomfort by running and bucking, just like Monte. She had seen it before with colics. This was something I had previously never seen.

Colic is scary. I'm glad your daughter's pony is OK. He's sure cute.

We've all been there. As I've learned, I've often wished I could go back to my teens and the patient and the not-so-patient, equine instructors that I had, and do a little better for them.

My best listen-to-the-horse-you-idiot moment came while out leading a trail ride. My rather hot but generally obedient mount spooked like a mofo about turning off to go down the trail I'd planned for us to take. He wanted to go another way and was pretty definite about not going that way - he wasn't being nappy, per se, just didn't want to take that trail.
After I'd looked carefully for snakes, and loose wiring and other hazards I insisted, so he went, producing a huge high stepping trot and rigid under me.
20 minutes down the trail we cross a stream, round a corner and up the bank and run into a herd of speedily oncoming angus cattle.
Cattle go Argh! Trail ride goes Argh! One melee later, I have cattle everywhere, three loose horses and several wet and weepy kids. If I'd just taken the other turn, I could have avoided all that.

Of course, the next ride out would likely have run into them, but hey, wouldn't have been my group!