Nothing in my past would ever have hinted at my becoming a published author. Nothing . . .

I didn’t particularly like writing. I still remember a supposedly “spooky-scary” story that I wrote for a ninth grade creative writing class. It had a decent opening—heavy fog moving in off the ocean and a feeling of doom—and, well, that’s as far as I got. My teacher scrawled “Where’s the ending?” on the top of the page. A technical writing class in college further confirmed that writing was not fun and not for me.

When I think about it, I wasn’t even a voracious reader, but I did become a fan of mysteries, and I’m sure that’s where every writer’s journey begins. Somehow, I skipped over Nancy Drew, the Hardy boys, and Agatha Christie. My introduction to mystery came with the incomparable Sherlock Holmes followed by an obscure collection of George Bagby mysteries that I devoured, and finally my discovery of Dick Francis in 1977. Though I had no inkling of the momentous nature of this event—finding my first Francis, a Reader’s Digest edition of IN THE FRAME—I was taking my first step toward becoming an author.

After reading IN THE FRAME, I read every Francis published at the time, quit the government job I was working, and went to work on a horse farm. That job was followed by stints at the track, delivering foals on breeding farms, returning to college to become a vet assistant, and more horse jobs.

Flash forward twenty-some years. I was a stay-at-home mom with three boys, ages three, four, and five. I had two horses of my own and some borders in the barn. Reading was a pleasant release from my daily routine, and of course, I gravitated to mysteries.

On July 22, 1996, I was nearing the end of a mystery, and I was disappointed with the decisions the author made in letting her protagonist do something that I thought was so stupid in an obvious effort to push the story into an exciting climax. I decided I could do better.

So, why did I think I could do it? This sounds kind of weird, but when I would read, especially a Francis novel, I’d wake up with his voice running in my head. I know. Weird, right? But I had full confidence in myself, and when I began writing, I couldn’t turn it off. I was so thrilled. Those early months of discovering a story were the best I’ve ever had in this business. I was infatuated. Enthralled. I was God of the world I was creating, and I was having so much fun.

I completed the initial draft of AT RISK in three months. As usual, I threw myself into the project and studied tons of books on writing . . . took classes . . . joined a critique group. Because I was exploring the process and essentially teaching myself to write, the early draft was way too cumbersome. I spent the next two years tightening and revising AT RISK (I’d estimate the manuscript went through twenty complete revisions) before I decided to market it. Even so, I began marketing before the manuscript was ready, but when it was ready, it was picked up by Poisoned Pen Press, the second largest publisher of mysteries in the country. And it went on to be extremely well reviewed, including a review in The New York Times. Visit my AT RISK website page. 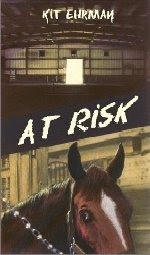 Like Laura said, getting published depends on both luck and perseverance . . . and skill. If I hadn’t kept revising and improving the manuscript, if I hadn’t been afraid to make changes and put substantial time and effort into the project, the manuscript never would have been picked up. Luck comes into play in finding a receptive reader, because writing and voice and subject matter and the actual execution of the work are all so subjective. Timing’s important, too. If the publisher had just released an equine mystery, they’d be unlikely to look at another so soon.

The publishing climate was different in the ‘90s, too. I couldn’t decide whether I wanted to query agents or editors, so I queried both and found a publisher before I found an agent. Interestingly enough, on the whole, the rejections I received from editors were much nicer than the ones I got from agents. In today’s market, though, more and more publishers are closing their doors to submissions from writers, preferring agents to perform a vetting service first. And it’s getting harder to break in and harder to stay in the game once you are published. Despite the seemingly dire publishing climate, readers still need new books to read. Agents still need to pick up new clients. Editors still need to acquire new manuscripts, so don’t give up.

Next time, I’ll post some specific pointers and ask some hard questions for those looking to get published.

Email ThisBlogThis!Share to TwitterShare to FacebookShare to Pinterest
Labels: AT RISK, getting published, Kit Ehrman, publishing

Interesting, the different roads we took to becoming published authors. One of my author friends refers to Poisoned Pen Press as the "biggest of the small presses"--I had no idea they were the second largest publisher of mysteries in America. Sounds pretty big to me. But they're not in New York, right? Somewhere in Arizona, if I remember. Or have things changed?

Laura, you're right. They're located in Scottsdale, AZ. By the numbers, the last time I heard, they were the second largest. Mystery Scene Magazine won't review their releases under "small press" anymore. :-)

Thanks for sharing your story, Kit.

I think it was Jami who said that small press books are produced via POD. I hadn't realized that, even though the business model makes perfect sense.

Does Poisoned Pen produce its books via POD?

Hi Rhonda, The hardcovers are printed in the traditional manner, typeset, then sent to the printers. The trade paperbacks are printed in bulk, initially, but sometimes they use POD, for instance, if they need some extras fast. ~ Kit

Wow--they really grew. When I met Barabara and her husband at a party (and it wasn't all that many years ago), they were just starting up the publishing business. I don't think they were publishing very many books at all. They've come a long way in a short time. Good for them. Those big NY houses need some competition.

Are you doing book #5 for Poisoned Pen? I know you've mentioned that you're working on it. I am so overwhelmed with writing #11 in my series. You would think that by now these books would come more easily. But for me, it seems to be getting harder. I wonder with every book (for the last three) if it will be the last one I've got in me.

Hi Laura,
Oh, it's a long story. :-) Barbara recommended that I get an agent and try to move to a NY publisher (that I was ready). I got an agent and have been horribly slow, dragging my feet. He did't really care for the next Steve book, so I'm working on a new series that he thinks will be more saleable. Oh, and you are so right. PPP has grown and grown.
Kit