My Week with Cellulitis

I got a call late last week from the barn. My horse was in great distress and one hind leg was swollen up like a balloon from the hip down to the hoof. They'd already called the vet. I left work and hustled to the barn.

They weren't exaggerating. My poor mare was in major pain, breathing hard, sweating, depressed, and shaking. She could barely support herself on a single hind leg and it shook from the stress of all that weight. Gailey is a really good patient, thank goodness. She really just wants sympathy. If she could, she'd crawl in my lap to be comforted.

The diagnosis was cellulitis, an infection under the skin caused by bacteria. That's about all I know about it, other than it can be dangerous and painful.

The pictures below were taken a day later after the swelling had actually gone down (believe it or not). So we started on a regimin of injectable antibiotics, a diuretic, and painkillers, and a some kind of special lotion because her skin was weeping.

Meanwhile at home, I have a sick husband with a screwed up back and a bad cough. So that's how my week has gone. Take care of the horse after work: Give her meds, unwrap and hose her leg, put the lotion on, re-wrap her leg, walk her for 5-10 minutes, then put her away. After that, it's home to take care of the hubbie.

The horse is faring better than the hubby. Her leg is almost back to normal size. Unfortunately, the hubby's cough turned into walking pnuemonia. He woke me up at 1 am this morning because he had trouble breathing. I ran him to emergency, and they ended up admitting him. Here I sit in his hospital room, which is actually a quite nice private room with two chairs and a couch. In a few hours, I'll run to the barn and treat the horse.

Which by the way, I found out that another horse at the barn came down with cellulitis yesterday. I understand that's unusual as it's pretty rare. Is that a strange coincidence or what? What the heck could have caused two horses to come down with an infection in the hind leg within a week of each other? I'll probably never know.

The other good news is that I have major medical insurance on her. Which is wonderful as the vet bills are mounting, and we aren't done yet.

So that's my week. This next week has to be better. 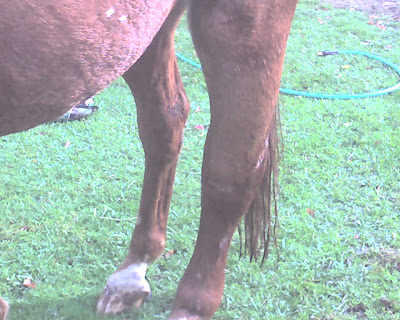 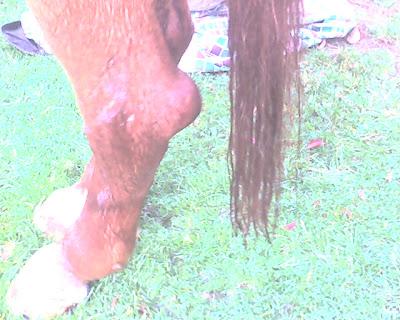 Posted by Jami Davenport at 8:26 AM

Wow, and I thought I had a bad week! What an awful week for you. My condolences. There's a saying that just when you think you've got it bad, someone else always has it worse. I've been bemoaning the fact that it won't stop raining around here (VA) and I can't get in a ride. Today is cloudy, wet and windy so probably another bust.
Last week had it's usual disasters (though nothing like yours). There's a saying things come in threes. First the little car that I drive all the time, because it's way more economical to drive than the big van, had the engine light go on. So it went into the shop to the tune of $400. That on top of the TV losing its picture and the washing machine developing a leak and spewing water everywhere. There went my plans for my weekend horse camping trip. The good news (not for those who were camping!) was that it rained most of the weekend so I ended up tucked in my DRY cosy bed Saturday night listening to the rain come down (hard) and being glad I wasn't out in it! I'd driven over Saturday evening to have dinner with everyone and sold three books so that helped asuage my sorrows about canceling the camping trip. And that's only last week. Hmmm.
But when I hear other people's woes I don't feel so sorry for myself.
Next week I head to Florida for some R & R so I hope things go better.

Poor babies! My horse is currently battling a cold... I had to give her an antibiotic shot... I'll see how she does in a few days.

Jami--I am so sorry to hear this--what a stressful week. I've only known two horses in my whole life to get cellulitis--both did recover completely. But it was horribly difficult, just as you describe, and both were very, very sick for awhile. I'll send good thoughts to you, your husband and your mare.

UPDATE: The other horse, who was an older schoolmaster, had to be put down last night because of complications from celulitis.

oh man - hard times at the barn! I'm so sorry for your mare and yet happy she is getting better. I'm so sorry to hear of the schoolmaster who was put down. Hang in there - it can't be like this forever!

Jami--The last horse I knew of to get this problem went up and down over a period of a month, and had many secondary complications. Many times her owner was close to putting her down. The mare looked near death several times. But she is fine today. I'm sorry the older horse had to be put down, but I just want to encourage you that sometimes these things look worse before they look better. I hope that you and Gailey hang in there. How is your husband doing? This must all be so hard on you. Good wishes for much strength.