Claustrophobia and My Mare 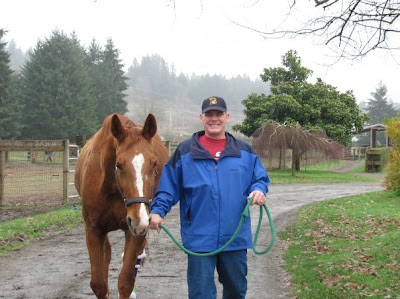 One really good book I read on the subject is called "Spoken in Whispers" by Nicci Mackay.

For those of you who've asked, my mare, Gailey, is finally getting over her cellulitus. This weekend was her first turnout weekend. The picture above shows my hubbie hand walking her Thanksgiving weekend. As you can see, she's lost a lot of weight.

On a personal note, I did have the misfortune of tripping across an animal communicator whom I didn't consider legitimate. I went to her for acupressure on my horse, not for her opinion on my horse's mental state and didn't appreciate her grandstanding at my expense in front of a bunch of spectators.

Don't get me wrong, I do believe there are people who are in tune with animals and can communicate with them. I also believe there are plenty who take advantage of the human owners. This particular person was quite arrogant and made me feel about 2 inches small. She treated me like I didn't know my mare, while she had her figured out. It didn't set well with me, but I gritted my teeth and kept my mouth shut. People who truly have these gifts are usually much more humble.

I do know this horse. I've owned her for 11 years. We've been through hell and back together. Many of you have read my old posts on her, including our trailering issues.

So this woman proceeded to tell me the mare was being belligerant, and she could get her to load in the trailer frontwards (I load and haul her backwards).  She also said she could "fix" her because the mare was a bully (she can be) had my number (only when I let her). She volunteered to have her husband assist me as he was a disciple of a well-known horse whisperer. The minute she said that, I knew I had her. You see, the man who told me to NEVER load my girl frontwards because of her extreme phobia regarding hitting her head happened to be her husband's mentor. I informed her of such, which rendered her speechless and her spectators in shock. I politely thanked her and left.

Which brings up the real subject of my post this month. My mare is claustrophobic to the point of it being a severe phobia. I've learned over the years to work around it. Unfortunately, not everyone who handles her understands her like I do.

If you knew her history, you'd understand where all this originated. As a youngster, she grew fast. As a result, I don't think she realized how big she was. At a few years old, she was being led into her stall. The barnworker didn't bother to open the stall door completely, and he left the latch sticking out. The latch embedded itself between two ribs and almost punctured a lung. She still carries the scars. Six months later, she was caught in a fence at the same boarding stable. She still has those scars, too. Add to that, a trainer who wenched her into a too-small trailer a year later and a broken nose from hitting it on the trailer.

I worked for years with natural horsemanship trainers to cure her issues to a point. I've outlined most of those experiences in past posts, so I won't bore you with any of those details.

Here's the problem. During her recent two-month convalescence and confinement to a stall, her claustrophobia issues have come back. It's really odd, as I'm the only one handling her. She balks coming in and out of the stall. Normally, I don't have problems with her unless someone else has scared her by yanking on her lead rope until she throws her head and hits it on the stall door.

Currently, she has been leaping in and out of her stall, after balking in the doorway. Not exactly a safe thing to have a 1500-pound horse going in and out of a stall like a horse breaking from a starting gate.

To handle her fear of stall doors, I don't turn and face her and pull on the lead rope when she balks like most people would do. I've learned that I need to stand at her head facing the same direction and walk out with her. I repeat until she follows me calmly. I've been working on this for the past month, yet she still leaps in and out of the stall door. It as if she believes a troll is hiding on top of the door to smash her on her head. I'm puzzled because she hasn't had any episodes that I know of what would have triggered this reaction. I don't understand what's going on.

So I, too, have been entertaining calling a animal communicator. Michele's post was quite timely for me. I'd be most interested in hearing anyone's theories as to what may have dredged up this old behavior.

Posted by Jami Davenport at 1:32 PM

Probably just all the time she's been spending in the stall. Do you think she would do the one-step-at-a-time exercise, perhaps using clicker and treats? - it might make the stall door a fun experience for her.

i agree with Kate, she got likely stall sour and the idea of being confined once again makes her very anxious... bringing on treats and lot's of rubs, patience, taking baby steps while encouraging even the slightest progress might do the trick...good luck

Perhaps you could enlist a nice communicator to help you get at the root of the issues. Otherwise, all we can offer is conjecture. It sounds like Gailey is associating entering/exiting the stall with pain, either real or anticipated. Maybe the earlier post about treats and clicker training could be useful.

Jami--I don't have any answers, however, my son's horse, Henry, exhibited a similar behavior after I had to confine him to a stall for three months, following colic surgery. I handwalked him every day (two or three times a day) as directed, and after we were into the second month, Henry, normally quite docile, began trying to charge out the stall door. I put this down to being sick of the stall, as others have said. However, in Henry's case there were no long time fear issues involved, and so I was firm with him about not running over me and, to some degree, tolerant of how he felt (why wouldn't he feel like this?) and we got through it. When he was returned to his regular routine (a big corral, no stall time), Henry dropped this behavior. The other thing that contributed to this (I think) was that I was feeding Henry a lot of equine senior delight feed, to combat the stress of surgery and rehab, and he felt pretty good. Sounds like this would not be true of your mare if she's lost a lot of weight.

The only other thing I can think of is that I believe these stressful episodes leave their mark on a horse, just like they do on a human. When we brought Henry back to the equine center where he had his surgery (for rechecks), every time they put him in the stocks he began to tremble, even before they touched him. His eye was calm, and he remained cooperative, but it was as if his body remembered the trauma he had been through here. So the trauma your mare has been through may somehow be triggering her old issues--I know this happens with people. I'm not sure this helps any with solving the problem, though. I know Gailey's history from your posts, and its clearly been a lifelong issue, as you say.

Its great you got her through the cellulitus. The other mare I know who recovered from this lost a lot of weight, too--but she gained it back and was totally fine in the end. Good wishes to you and Gailey.

You might check into EFT (Emotional Freedom Technique). It's quite effective dealing with emotions, in humans and horses, by tapping on meridian points. It doesn't require a lot of analysis, so you could work on "fear" and it might help get her over this rough patch, even if you're not sure why it's reappeared.

You can google EFT or Gary Craig to find more information.