Mark your calendars for Friday, April 9th, 2010. The two great race mares, Zenyatta and Rachel Alexandra, arguably the two best race horses in the world right now, are set for a showdown in the Apple Blossom Stakes at Oaklawn Park in Arkansas. 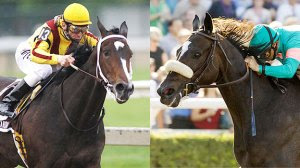 Ever since these two wonderful mares, (Rachel is now 4 and Zenyatta is 6) ran such thrilling, undefeated seasons in 2009, fans have wanted to see them run against each other in the same race. It was only recently, however, that the owners agreed on a time and place. Each horse still needs to complete a prep race in March, however, and stay sound and healthy. But if this match-up does take place, trust me, it will be billed as the Race of the Century. (And considering this century is only one decade old, certainly that would not be a stretch.)

Girl power! Both Zenyatta from the West Coast, and Rachel from the East amazed us in 2009. 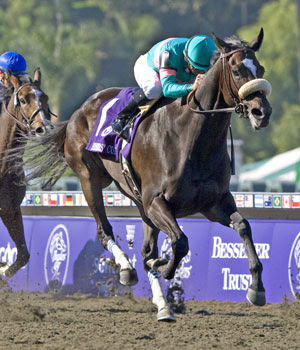 Zenyatta, a strapping 17.2 hand mare who remains unbeaten in all 14 of her starts, thrills us with her come from behind stretch runs. In October 2009, after beating all the fillies and mares she ran against, she was entered in the Breeder's Cup Classic, a race that brings the best race horses in the world together. Viewers wondered if she could compete against this elite company, all colts and older males. She not only ran, but came from dead last to pass every horse in the race, becoming the only female ever to win the Breeder's Cup Classic! 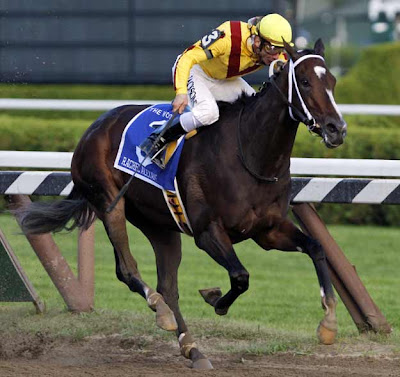 Rachel Alexandra, the fluid and amazing mare with the distinctive white blaze, won all 8 of her starts in 2009 and was named Horse of the Year (against the only other nominee, Zenyatta, with many horsefolks calling for a tie.) Rachel won two of these races by a margin of over 19 and 20 lengths. Her jockey Calvin Borel chose to ride her in the Preakness over Kentucky Derby winner Mine That Bird. It proved to be a good choice, with Rachel winning the Preakness, the first time a filly had won that race in 85 years. She then went on to race and win against males in two more races, proving she is a racehorse for the ages.

These two great mares, Zenyatta and Rachel Alexandra have probably done more to get people excited about horse racing than any other horses in recent history. It was amazing to watch fans line the racetracks holding up signs that read "Girl Power."

If you get a chance to watch the Apple Blossom on April 9th, whether one or both horses run, please do so. It may be on a major network, but it also might be on ESPN or one of the two horse racing channels: TVG or HRTV. I will definitely be there - glued to my television set, cheering them on. Go Zenyatta! Go Rachel! You are BOTH Amazing!!
Posted by Linda Benson at 12:02 AM

I'm just hoping and praying that neither is injured - I saw the Ruffian/Foolish Pleasure match race live and will never forget it - neither wants to lose and I hate to see either one of them defeated.

I also would hate to see anything happen to either one of these fine mares, Kate. I believe they both have trainers and owners that do right by the horses, although no one can foresee what might happen. No matter what the result of this race, I hope they both retire sound and live to ripe old ages as broodmares.