The Schooling Show--Back to Basics and Other Random Thoughts

Yesterday was one of those beautiful spring days in the northwest that we all live for. Picture this: 72 degrees, blue skies, green grass, and flowers everywhere.

I belong to a small equestrian club comprised of women of varying ages who get together and go trail riding and just plain have fun on their horses. I'd volunteered to meet some fellow club members at a small schooling show about 40 minutes from my home.

So my consummate horse show husband and I headed off for the show mid-morning. With Mount Rainier in the background, I read the introductory dressage test for two of the ladies. They did a great job. Their horses were well-behaved, and we all had a great time. In the picture below,  I'm walking out to the arena (in the red sweatshirt). 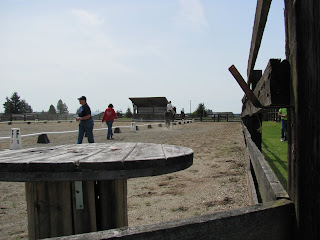 I hadn't been to a schooliong show in YEARS. I'd forgotten how much fun and how laid back they can be (though I'm not sure the riders would agree with me). I had the time of my life, but then I wasn't the one showing my horse. 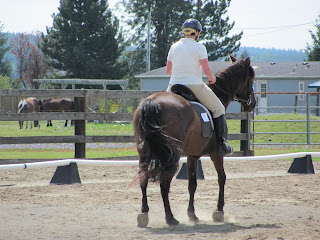 I'd also forgotten how important accuracy and figures are in a test, especially at the lower levels. While I tried to explain how to ride a perfect 20-meter circle to my friends, I had to laugh. Who was I kidding? After 30 years of dressage, I still can't ride a perfect 20-meter circle, especially one in the middle of the arena. If you've ever ridden dressage, you know we're forever searching for that elusive perfectly round circle. Dessage riders are a stange lot. To think we can ride endlessly for days, weeks, months, years, and get such a kick out of a perfect circle.
Then there are straight lines. It's amazingly hard to ride a straight line down the middle of the arena or down a diagonal. I swear I was riding every step of the way with all of them.
When it was all said and done, I  had the bug again. I wanted to show, even if it was just a schooling show. So the next one is scheduled for July 3, and I'm planning on riding my mare at Third Level. I want to see how she does with Big Leg and whether or not she holds up for two classes or melts like an ice cream cone in the heat (if it is hot, this is western Washington, after all).
My last rides and lessons on her have been the best ever. Like my trainer says, who would've figured this mare would be going better than ever with that leg. Yeah, who would have figured? In fact, we conquered the three-loop serpentine without a change of lead. That darn thing has been my nemesis for years. In fact, I confess to being somewhat lazy about practicing counter-canter. If Gailey wanted to swap leads (which she always did) instead of counter-cantering, who was I to tell her no? The last couple days, I've ridden some incredibly easy and balanced counter-canters in the surpentine.
My other chore this weekend involved cleaning up the trailer. It's been parked all winter back in the woods. When I pulled it out, it was covered with more fir needles than the trees around it, not to mention moss and grime. Armed with a hose, a ladder, a bucket, several kinds of scrub brushes and mits, I tackled the inside and outside of the trailer. I'm proud to say it now looks as good as the day I bought it. The trailer is now parked alongside the barn. I'm never parking it under those trees again.
So I've babbled on enough about my weekend. I hope you had a wonderful weekend, too.
Posted by Jami Davenport at 8:06 PM

Great, Jami. I'm so glad you are going to show Gailey again. And sounds like a schooling show will be just the right mix of competition and fun to make it an enjoyable experience for you both. Good luck and keep us posted!

Oh, the challenge of a perfect circle and a perfect straight line! It sounds as if Gailey is in great shape, despite her big leg. And is it still seriously big? I enjoyed reading about your day at the show; I love going to shows...but I must say that I far prefer watching to competing. However, I'm trying to talk myself into showing Kwintus this year - he's doing so well and is such a delight to ride. And he loves going to shows! If only I could get my nerves to chill out. Any tips???

How fun and what a good motivator! I'm glad you had so much fun!