The Kwintus Chronicles: It's the Final Countdown! 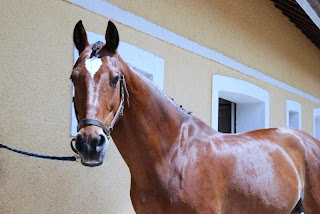 Oh dear. It won’t be long now. Yes, IT’S THE FINAL COUNTDOWN (sing it! If you know the song, that is…)! Early on Saturday morning, which is…errr…gulp…the day after tomorrow, Kwintus and I will be travelling in Steph’s horse-lorry (loading/unloading is easier than in my van) to the Chalet-à-Gobet, a village above Lausanne, where, at approximately twenty minutes after noon, we will be taking part in a dressage competition.

If you read one of my earlier posts you will know that I’m not exactly the most competitive person on the planet. Surges of adrenaline do not do it for me; mention the word “competition” and my stomach turns over, refusing to be held accountable for anything that’s been anywhere near it in the past twenty-four hours.
I guess I’ll cross that digestive bridge when I reach it, namely tomorrow.
Meanwhile, this afternoon, I have my final pre-competition lesson with my trainer, Marie-Valentine. It won’t be a long lesson because Swiss/French (we live right on the border) temperatures are totally out of control (it’s supposed to be a whopping 40° centigrade in central France today), making conditions on our white-floored outdoor arena at 3.30 pm seriously sizzling. Then there’s the horse flies, the regular flies, the squadrons of unidentified ugly beasties that insist on vampirising poor Kwintus’ neck.

I’ve been heading out to the stables super early during the past week in order to avoid the worst of the heat, but Kwint and I still sweat buckets. I’ve kept our sessions short: a fifteen minute walk down a shady forest trail, followed by a twenty minute workout, followed by another fifteen minute walk down the forest trail, and then a long, cool shower. Seriously, it’s just ridiculously hot, which is crazy since until it became ridiculously hot about two weeks ago, it had been ridiculously cold since last November. But that’s how the weather tends to be in this part of world.

Anyway, the good news is that I know my program. Of course, it’s perfectly possible that, on Saturday lunchtime, knowledge of the program will be wiped out by a massive surge of adrenaline as Kwintus and I enter at A and power towards our halt at X, leaving me flailing like a moron in the centre of the arena, with no recollection whatsoever of what comes next. Mind you, Kwintus will probably know. We’ve practiced the program so often that he seems to know where the two ten metre circles come, where to stretch into an extended walk, where to transition into canter- walk and strike off on the opposite lead in the centre of the arena. The last part of the program might be a bit of a problem as he clearly thinks the twenty metre circle with the neck extension is a complete waste of time, and always tries to lean into my inside leg to make it smaller. Then, if I don’t collect him properly before the corner and get him into my outside rein before turning into the final half-circle and halting at G (I think it’s G, it’s the middle letter right before the judges), he just kind of roll-flops into it. I mean, I can almost feel him yawning in boredom, asking me “are we done yet?”. He’s such a character!

The bad news is that the weather forecast for Saturday is mega caliente again, so our warm-up session will be kept to a strict minimum: ten minutes walk, then five minutes trot and canter on both reins, and then off we’ll go to face the judges. If I do more than that, Kwint’s engines will fail; he’s eighteen years old and, having spent most of his life under more clement English skies, has a hard time performing in hot weather. Nevertheless, I know he’ll do his best for me, because that’s the kind of horse he is.

Anyway, it’s getting late, so I must change into my riding clothes and head out to the stables for one last practice. My daughter, Olivia, will hack him out tomorrow to preserve energy!

Think of me on Saturday! I’ll let you know how it goes!

Posted by Francesca Prescott at 4:34 AM

Awww good luck to both of you. I'm not at all competitive either (having to play cricket at school in 35° heat kind of takes the edge off being competitive in adult life), so I feel your stomach anxiety! Enjoy, no matter what.

Francesca, Good luck. I know you'll do fine. I'm looking forward to hearing about your experiences at the show. Get some pictures for us. Stay cool!!!

Good luck at your competition!

Love the picture - what a sweet face, and heart-shaped star, and the ears! The ears make the face!

good luck, and have fun! I just love reading about you and Kwintus, he seems like such a grand old horse!

Aie aie aie! It was SOOOO hot yesterday afternoon, and our arena is in full sun. Kwintus was not impressed at all, the horse flies were driving him insane, and I had a hard time keeping his engine switched on. I've been to the vet this morning to pick up some serious anti-fly stuff, so hopefully it will help as I'm told the competition venue is also infested with bugs, and that last year one horse got so furious with flies on his belly that he went down the centre line on three legs, shook himself and literally lay down!! Can you imagine?!

My stomach is ok-ish, and thank you for all the lovely encouraging comments. I'll let you know how we get on... Argh.

Hope you have a wonderful show Francesca! Looking forward to hearing about all your experiences and that your vet supplied fly deterrent worked!!
When friends and I used to show dressage, we always had mimosas waiting on ice for after the tests! That way something wonderful always happened no matter what really happened!!!!

Hello! I did it!!!! He was amazing! You should have seen my first trot in the warm-up arena, I couldn't believe it...totally magical! Sadly, we couldn't sustain it when we got into the arena, and I fluffed a ten metre circle (did it one letter late...had a blonde bubble!!!), and messed up coming out of the corner in canter before extending and he fell into trot for a few strides. So we didn't place, but I had such a great feeling, and I'm so proud of him, and yes, mommyrides, you're so right, something wonderful happens no matter what!

I can't wait to watch the video!!!