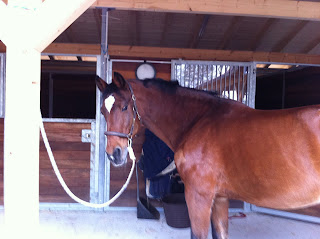 This morning I rode Kwintus for the first time in two months. Those of you who have read my last few posts know about the series of problems my poor old boy has had recently, not to mention how worried I’ve been about the possibility of his working days being over.

My stomach was not a happy bunny as I drove to the stables. The idea of getting on Kwintus, of riding down to the arena and pushing him into trot only to find him stiff, lame, uncomfortable and totally unsteady on his feet terrified me. Also, I knew that my daughter was sitting in Cornwall, biting her nails, waiting to hear how my ride had gone, and the notion of giving her bad news made me nauseous. I was so worked up that I knocked back some Rescue Remedy!

I’d arranged for my friend Sybille to meet me at the stables, thinking it would be helpful to have someone on the ground to give me visual feedback should things go wrong. I mean, if Kwintus stumbled or fell, she’d be able to describe what she’d seen, whereas I would only “feel” the problem. With wiggly beasties in my tummy, I saddled up my woolly boy (he looks like a Polar Bear and seriously needs clipping!), hopped on, and we headed down to the arena.

Kwint seemed thrilled. “I’m back!” he seemed to say, striding down the hill, flicking his front legs out in front of him, ears pricked. Today has been a beautiful, absurdly hot day for a Swiss November, and it felt wonderful to be back in the saddle in such idyllic conditions. Sybille and I chatted for a few minutes as I walked Kwintus around the arena to warm him up, and she commented on how loose and ample his walk seemed. I had to agree; considering he’s not done any work since late August, apart from six or seven sessions in the Aquapacer (water treadmill) in the past two weeks, he felt pretty amazing. After ten minutes or so I took a deep breath, collecting him slightly before asking him to move into trot. He rewarded me by bouncing into a balanced, rounded trot, engines firing nicely from behind, and no signs of unsteadiness on his front legs. I glanced at Sybille to make sure she was seeing what I was feeling, and she gave me an enthusiastic thumbs-up.

After a few minutes I changed the rein, moving onto the dreaded left side (his neck problems affect his left foreleg), taking a little more contact with my outside rein to help him keep his balance and although he wasn’t as smooth as on the right, there was none of the horrendous “leg giving way beneath him” sensation. He was forwards, light, with a nice swing in his back. The right lead canter was a dream, and my spirits rose further as he let off a little buck of joy! Even the left lead canter went better than expected, and during the last few minutes of our workout, his trot became more connected, balanced and powerful. In fact, looking back, I don’t think I’ve felt him so at ease with his body in quite a long time.

Our ride probably lasted less than fifteen minutes (work-wise), but it was plenty considering everything he’s been through lately. Walking him back up to the stables, I couldn’t stop patting him and smiling and telling him what a clever boy he was. I texted my daughter the good news as I rubbed him down, sending her a photo of our contented, sweaty, four-legged friend. She replied immediately, declaring this to be "the best news ever!”!

My fingers are crossed, and I’m knocking on wood, but after the great feeling he gave me this morning I think my lovely old boy might be able to enjoy light work and gentle countryside rides for a little longer.

I’m really looking forward to another little session tomorrow. And you know what? I think Kwintus is too!

Posted by Francesca Prescott at 9:42 AM

Francesca--I'm so happy for you and Kwint (and your daughter). It sounds to me like you have many fine riding days in front of you. You know, if a horse wants to be a riding horse (and Kwintus clearly does from what you say--and his expression in the photos) that goes a long way toward making it happen. I bet he has lots more pleasant and useful years as a mount in front of him. Cheers--Laura

This is good news. So glad to hear it.

Good news indeed! I'm happy for you both.

Awww, thank you everyone! I just got back from a second session. Kwint is no longer a polar bear, he was clipped this morning and looks far more the part! He was a little stiff today, definitely feeling muscle pain after our little session yesterday. But he was steady on his feet, so it's all good. Only did about 6 minutes of trot altogether today, the rest just walking. The weather was stupendous, 19° centigrade, which is wild for November, and the colours are amazing. Wish you were here to see it all!!!! He's aquapacing tomorrow, and I'll ride on Sunday. Lots of love to all of you :)

It's so wonderful when a horse feels 'good'! Congrats on doing everything possible for Kwintus.