Qrac and Me: A Work in Progress 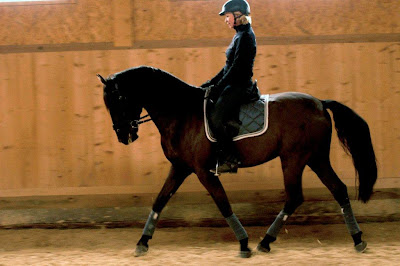 It’s amazing what a difference a good indoor arena makes. Until I moved Qrac to my new stables, miles and miles away from my house (I’m putting a thousand kilometers per week on my car, which is a bit of a drag), I’d never worked him in a proper rectangular arena as both arenas at our previous yard were oval. Consequently, Qrac and I had never worked corners properly, because even when you improvise corners, or imagine “pretend” corners, it’s simply not the same. So I’m loving the four corners of our new, massive, wonderful indoor! 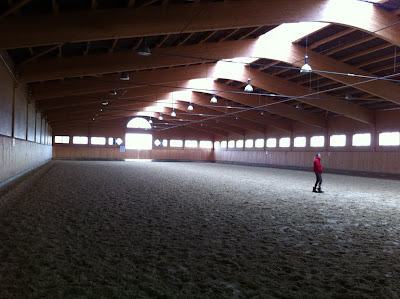 Not that Qrac and I have become corner experts in the six weeks we’ve been there; I still have a hard time pushing him into them. However, they’re fantastically useful for working on shoulder fore, especially in canter. I’m currently obsessed with shoulder fore as it’s really improved the quality of the canter. I’m able to collect him more and he’s more rounded, more springy, especially on the left lead, which is the one he prefers. Working shoulder fore on the right lead canter is still ultra-tentative; although he’s seriously improved and no longer feels like he’s falling onto his inside shoulder, I still have to be ultra concentrated, totally focused on where I’m sitting and where my inside leg is, making sure he stays in my outside rein, keeping him bent around my inside leg. Transitioning into canter is also still tricky; if I use my outside leg too much he’ll tend to stick to it and buck into canter, so my trainer is really working on getting me to work the transitions using my inside hip. Getting the timing right is really hard, but when Qrac and I get it right our transitions are really harmonious. I like to use my voice to help him understand the subtle shift in my position (“Qraaaaac, gaaaalop!”).

The more I get to know my horse, the more I’m amazed by how generous and willing to work he is. Qrac really tries, sometimes making me smile with his funny little effort-grunts! I think he sometimes gets frustrated with himself, trying really hard yet not quite managing to do what he knows he’s supposed to be doing. For example, during a lesson with my trainer about two weeks ago, we worked on medium trot for the first time, and Qrac found it really difficult to stay in a constant rhythm and got a little flustered and agitated (it was like he was saying, “for goodness sake, I should be able to do this!”), but I could tell he was trying extremely hard and was thrilled with the three or four nice strong strides he gave me. Like most Iberian horses, Qrac doesn’t have a fabulously expressive trot, but we’re working towards developing it as much as possible, slowing down the rhythm, getting him to reach for the bit and get him more active behind without rushing in front. To build a little more expression in his trot I’m working on the idea of passage, slowing him with my seat and getting him to work more upwards by thinking “up” with my ribcage. Maybe it sounds a little strange described this way, but it definitely helps. Until recently, Qrac’s trot tended to get quite rushy after the canter, and even now there is the odd day when he works himself into a bit of a state, becoming somewhat sewing-machine-ish, making himself hollow. By using the idea of passage I can now usually get him back into a slow, rhythmic trot again. If this doesn’t work, I just bring him back to walk, and do a gazillion half-halts until he’s attentive and relaxed enough to resume work. 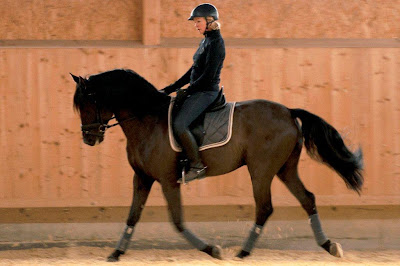 Basically, since we moved to this new place we’ve been really been able to challenge ourselves and work on all sorts of things. We’ve done miles and miles of leg yield to get him to take more contact on the outside rein, and we’ve really improved our shoulder-in. Even the trot half-passes are beginning to come together, although I tend to be a little too timid with my outside leg, concentrating too much on the shoulder-in part of the exercise and not daring ask for too much (I’m so nice!). But when I do, he’s a natural-born half-passer! 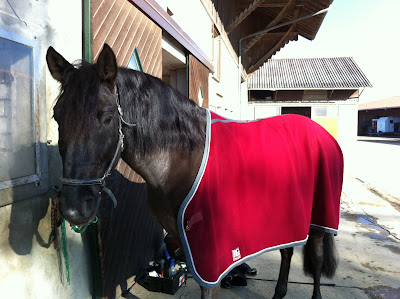 I’m so thrilled with his progress that I’m beginning to consider the remote faraway potential possibility of entering him in some shows next season, which is really saying something since I’ve never been a big fan of shows, always getting way too nervous. Of course, neither of us is ready yet; we need to be more rhythmically steady in all three gaits, better our transitions and really improve the canter before contemplating going out in public. I don’t know how it is in other countries, but Swiss dressage judges tend not to like Iberian horses, so chances are we won’t get very far. However, I love my horse so much, find him so jaw-droppingly beautiful and am so proud of him that I’d like him to show everyone that Iberians can be just as good as northern European Warmbloods. I told Qrac about all this the other day after I’d dismounted, while we were pottering around the indoor, picking up pooh. He nuzzled my shoulder and gazed at me lovingly with his almond shaped eyes. Maybe he wants to show those Swiss judges, too!

Posted by Francesca Prescott at 10:11 AM

The two of you look gorgeous together and you are obviously working hard to be in sync, and enjoying each other. I hope if you do enter shows, it doesn't diminish your joy but expand it. (Sometimes shows can be defeating!)

Thanks, Alison. You're right about shows being defeating sometimes; I've never been comfortable competing but have this alter ego who would like to be comfortable! It's weird.

I'm looking forward to your post tomorrow. Oh, and I received one of your books from Amazon, I bought one for my horse-crazy niece. I kind of feel like unwrapping it and reading it myself. Maybe she'll lend it to me when she's finished!

I love this! I'm working on right leads with my mare...she tends to be "dead sided" from a trainer who used spurs way too much, and has gotten better over the years. I see several pointers for me to try :)

And my gelding gets flustered, too...he swishes his tail when he's trying really hard to figure out what I want!

And you two look great together!

What a handsome boy! You two look lovely together, and it sounds like the beautiful (I WANT ONE!!!) indoor that you have to work in is really helping your partnership. How exciting!