It's New Year's Eve and the local paper is filled with the top ten stories of the year both locally and globally. The earthquake in Japan, the civil wars in the Middle East, the Occupy Wall Street movement, and the US economy were all top stories. I cringingly have to admit that though all of these emotionally and mentally engaged me when I read about or heard about them in the news, my family and I were affected by none of these huge incidents. Virginia had a teeny earthquake and a teenier drought. My husband and I both have secure jobs, and my family and animals are all healthy. How are so many of us lucky enough to escape the world's turmoil? It is a question that puzzles me when I see photos of starving children and tsunamis engulfing a town. 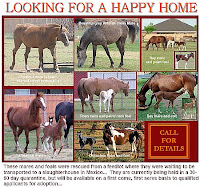 One of the issues that didn't make the top ten was Congress lifting the ban on horse slaughter in the US. I uploaded this image because it depicts horses that were rescued before they went to Mexican slaughterhouse. In 2010, 138,000 horses were shipped to Mexico and Canada. I did not research this site/blog where the image came from, but I do know that the photos represent the many healthy horses being auctioned and sold for slaughter. The topic is a hot one and elicits much debate with pros and cons on both sides. An article in my local paper on December 11, quotes a woman in my area who wants to be able to butcher old, injured or troublesome horses in order to feed her dogs. The Virginia Horse Council feels that it is better to slaughter horses locally where the process can be regulated instead of shipping them long distances. The organization is also in favor because it hears stories of too many abandoned horses and livestock traders "locking up their trailers at auctions lest they find unwanted horses when they return." Hay prices have doubled in many areas due to drought, and the poor economy, which has made many jobless, has forced people to make a decision about their animals. A healthy, well-trained horse might find a good home. But what about older, less attractive prospects? Euthanizing a horse in VA costs about $200; laws forbid burying your horse on your property so there is then a disposal fee. Even PETA supported the repeal of the ban for slaughter in the US though many animal rights groups are pushing for a total ban on slaughter of horses here and in foreign countries.

I am on the fence. Dogs and cats continue to be abused and abandoned and then put to sleep at shelters because of owners who do not take responsibility, so it is naive to think that if there is a ban on horse slaughter, humans will stop breeding unwanted horses. I know this blog is not the place to discuss any of the top ten issues, nor do I want to get in a huge argument. But in the context of my life, I know I am blessed and lucky to be able to teach, ride, volunteer, garden, read, write and raise a healthy and happy family of humans and animals while too many are not so fortunate.

Alison--Thanks for bringing this up. I think horse slaughter should be discussed wherever there are people who love horses, because as a group, we need to reduce the amount of unnecessary suffering that horses endure. No matter what our views on slaughter, surely we can all agree to that.

I did a post on this blog last January titled "A Controversial Subject", so if you are interested in my ideas on this subject, you can find that post under January on the sidebar. But in short, I think it is better to have carefully controled horse slaughter in America than what we have now, which is huge suffering as horses are hauled to Mexico and Canada to be slaughtered in horrible conditions. But I think humane horse slaughter involves more than simply creating a "good" facility. My concept for humane horse slaughter is too complicated for a comment, so again, read my post from last January if you'd like my take. But what we're doing now isn't working. We need to come up with a different model.

And yes, I give thanks every day that I am able to take care of my horses and other animals, let alone my family. It is heartbreaking to realize that many well-intentioned people lose their horses (and sometimes to bad ends) because they are financially unable to care for them.

This is certainly an emotionally charged hot topic. I, for one, hate to see animals suffering - dogs, cats, cows or horses. I love animals and hate the thought of their being euthanized for lack of a loving home, but I know that I can't rescue them all. But, on the flip side, if animals can't be taken care of in a home they are often abandoned and suffer, whether from injuries or from starvation. Just yesterday NPR was talking about abandoned donkeys in Texas; ranchers just can't feed them. I would much rather see regulated humane means of putting an animal to rest than options that are available to animal owners who have their backs against the wall.

It's time for pragmatism. There are more horses about than people willing and able to care for them. A slaughterhouse in the neighbourhood can be regulated more easily than one abroad. The critical thing is for legislators and regulators to take responsibility for finding the most humane way out of a bad situation. Thoughtful owners can help make this happen by keeping the issue on the agenda.

Equally we need responsible breeding. I own a stallion and have just been approached by someone who wants two mares covered in the spring for no good reason. The mares are poor to indifferent quality and she has a yearling foal already. I need to say "no" and tell her why. A lot of owners of mares and stallions need to say "no".

White Horse Pilgrim--I so agree. A lot of owners of mares and stallions need to say no. I have to say, that's one of several things that's handy about geldings--the temptation isn't there. I know it is sometimes hard for the owner of a loved mare that isn't ridable any more to resist the temptation to breed her. But given where we are at now, with so many more horses than there are good homes, every single person needs to think VERY hard before breeding another horse.

This is a problem for which there just isn't an easy or simple solution. Living only about 40 miles away from the Mexican border I know only too well how often horses end up at slaughter houses in Mexico. Hank, the cute litle paint that I am pictured on on the sidebar of this blog was heading to just such as slaughter house when a local pony club family rescued him and later gave him to me.

The other side of it are horses that slowly suffer and die from diminshed care and ignorant owners. In my opinion it comes down to personal responsibility but we all know there are far too many people in this world that do not understand that concept. We get a lot of PMU horses in our area and on 3 different occasions I have had to assist the vets I work with euthanize these horses because stupid, careless owners have gotten a free horse and not bothered to learn how to properly take care of it. In one case the horse was so impacted with worms, because the woman had no idea you were supposed to worm them, that the worms had literally formed a stone in the large intestine.

Perhaps one part of the solution is to have stronger laws and more zealous prosecution for neglect and abuse. However, I do think that an animal is better off being humanely slaughtered than be allowed to suffer neglect and starvation.

Good post Alison and perhaps a subject that should be brought up again in the future.

Thanks guys for chiming in with strong opinions! I love a good discussion. It will be interesting to see where the new legislation leads.