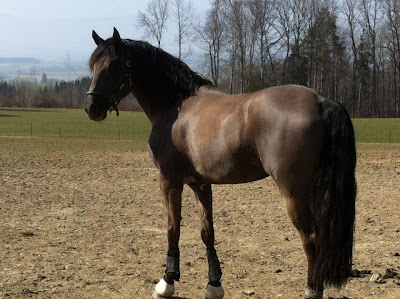 Show season is underway in Switzerland, and the ladies who ride dressage at my stables are gathering together in the coffee room, cleaning tack and discussing which competitions they’re going to be signing up for.

“Will you be competing this year?” they ask me as I slip coins into the recently installed hot drinks and blubber distributor, caving yet again to the double whammy of a Twix bar and a hot chocolate. I’d go for unsweetened coffee, I swear I would, but there’s no caffeine-free version (I don’t drink any caffeine at all), so until the weather warms up and vanity kicks in, I’m powering towards Cellulite City. I urgently need a sweet tooth extraction.

Will I be competing this year? It’s a good question. I’m not a competition junkie; never was and probably never will be. I get nervous, stressing out at the mere thought of moving up the centre line under the unforgiving gaze of the judges. Nerves even got the better of me on my now-retired, good old show-pro Kwintus, so I can only imagine the wear and tear on my intestines should I sign Qrac up for a program or two. Then again, a good case of show nerves might undo some of the Twix and hot chocolate damage, and if I seriously grab the tiger by the tail and ride every show on the calendar, there might come a day when I find myself cellulite-free, nonchalantly tempi-changing up that centre line with the reins in one hand, à la Juan Manuel Munoz Diaz and Fuego XII (have you ever watched his freestyle program at the Kentucky World Equestrian Games in 2010? It’s upliftingly wonderful!). But one-handed tempi changes are quite a way off, considering Qrac and I can barely ride a decent circle. He’s such a wiggle bum!

Nevertheless, when I think about how complicated I found riding him this time last year (I can hardly believe it’s almost a year since I brought him home!), how he used to just snatch the bit and run after his feet, I can only be proud of our progress. He still gets a little hot under the collar after the canter, his trot goes all “frantic” and it’s often a challenge to bring him back to a nice, swinging, regular tempo. He’s a bit of a social butterfly, and is easily distracted by horses coming into the arena, or leaving the arena, so I need to keep his mind busy in order to keep him concentrated. He’s also pretty pig-headed; when he decides he’s had enough for one day negotiating a little extra can become quite a long conversation! Qrac can go from beautiful to absolutely rubbish within three strides, which can be ever so frustrating. A couple of weeks ago I was having a lesson with my trainer, and she was so thrilled by how fabulously he was moving that she took my iPhone and started filming us. Unfortunately, she was just a little too late; Qrac morphed from dream machine to sewing machine the second she pressed record! I was so disappointed.

Coming back to the showing issue, I’m also a little concerned by how my horse will react on the showground. He’s not the bravest of horses and at the moment tends to slink through the village glancing from left to right, like a soldier on a stealth mission, certain that danger lurks behind every letter box. If I take him to a show, chances are he’ll freak out at the flower pots, spook at the flags, refuse to go anywhere near the judges huts, and shy away from the little white dressage railings. He’ll also probably be totally distracted by all the other horses. Me? I’ll get all flustered and self-conscious and forget my test!

I know, I know, I should think positively and not worry so much. We have to start somewhere, and if we went out regularly enough there’s no reason why he shouldn’t get used to performing in different environments. I’m just not sure I’m driven enough to put myself through the whole palaver, weekend after weekend. A part of me wants to, because he’s a beautiful horse, because I’m proud of what we can achieve (well, sometimes!), yet another part of me recoils in horror at the mere idea. I love training, I love working towards that perfect transition, that perfect circle or shoulder-in or half-pass, but I like to transition WHEN WE’RE READY TO TRANSITION, and not at A or E or M just because the test says we have to!

Even so, Qrac and I can actually ride a semi-decent test; I know because we’ve recently ridden a few, just to see whether we had it in us. As usual, I underestimated my capabilities as a rider and was rather chuffed by what we managed to do. The extended trot will probably never earn us many points; Qrac just doesn’t have a big, extravagant movement in trot. There have been moments when I’ve really felt him try to extend, and even wondered whether he might be doing a touch of fancy toe-flicking, but I think it was wishful thinking. But his walk is superb, his canter is great, so if we do show we’ll just have to make the most of his strong points. We also need to practise standing still, which Qrac tends to think is a waste of time if he’s not absolutely exhausted.

Will I be competing this year? I don’t know yet, but I’m definitely working towards the idea of competing. I’m really enjoying the journey, so I’m not too bothered about when we actually get there.

How about you? How do you feel about competing? What are your goals for this season?

Posted by Francesca Prescott at 8:38 AM

I try to never compete against anyone but myself. My goal is to be better than I was the last time I showed. That keeps me focused on my horsemanship and not what everyone else is doing. That just adds to much stress for me. We had our first reining show weekend before last. It was set up to be a disaster for us. I hadn't ridden the week before, the warm up pen was unusable. We got a short warmup in the main arena and then we had to go get it done. And you know what? We did. I told myself to ride for a 70 (which in reining is an average - no minuses, no pluses score) And we got a 68 and 69. It was a better than we had done all last year. For me that is a win. I have no idea where I placed in the grand scheme of things. Don't really care. If I get a little money back, it will be icing on the cake.
I think that for me, showing is a conformation by a third party (peer) that my horse and I are progressing and learning. And I love getting my scoresheets back and seeing where I need work. Gives me something to work towards.

Francesca--You know I don't compete any more and don't want to, but when I did compete, the place I arrived at was much like what kel describes (horsegenes). I did my best and tried to be indifferent to scores/placing. And everybody has good days and bad days. You have to be able to shrug the bad days off. That said, I have had enough competition for one lifetime, thank you very much. If I were you, I'd haul Qrac to a couple of shows BEFORE I entered anything--and let him (and you) feel out how it is to be there together. Ride in the warm up ring...etc. If it goes well, it may take away some of your anxiety and if it goes poorly, well, maybe you'll know you need to work more at just being there before you show. Either way, you might learn whether you really feel drawn to compete...or not.

Why don't you go to a small, affordable schooling show first. I like to take my babies or spooky horses to a cheap schooling show and enter class after class till they are relaxed and calm and realize shows aren't so bad. After they can go to those shows and do 1 or 2 classes only and be happy, calm, and responsive is when I enter the bigger ones. Smaller shows has less competitors, people are more relaxed, overall it is setting the younger inexperienced horses up for success.
My goal for showing is always to better myself and my horse if we win some money and prizes great, if not I still know I have the best horse for me out there.