The loss of a great man.

On the evening of June 27th, the equestrian community lost one of its greatest pioneers, friend and advocate. Dal Scott, father of the writer we know and love, Michele Scott, passed away peacefully last Wednesday surrounded by his beloved family. 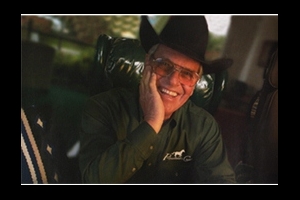 What some of you might not know is that Dal Scott revolutionized the equine care industry with the invention of the original Sports Medicine Boot (SMB). The first of its kind, the SMB is now commonly used across all equestrian disciplines and has protected the careers of many an equine athlete. This single innovation blossomed into the company now known as Professional’s Choice. Today Professional’s Choice is still considered an innovator and producer of some of the highest quality boots, pads, bits and other horse ware found in the equestrian products industry.

But that is enough about the company, I would like to tell you more about the man, his family and his legacy. I consider myself very privileged to have met Dal Scott, his wife Nina, daughter Michele, son-in-law John and Grandchildren Kaitlin, Anthony and Alex and daughter Jessica. Dal had a personality, sense of humor and charm that was larger than life and quite infectious. Although I did not see him often, when I did I always left smiling.

As many of you know, his daughter Michele is one of my closest friends and it is with her that Dal’s greatest legacy begins. Dal had an honest, kind and generous soul that he instilled in his daughter as well. He would take in any stray, 4 legged or 2 legged, that needed a helping hand and mentored many both personally and through the many scholarships funded by Professional’s Choice. Michele is one of the most fundamentally kind and generous people I have ever known, sometimes to a fault, and is always mentoring and assisting kids with horses and writers alike. She is my greatest writing mentor and continues to encourage and push me to reach my goals.

Her daughter, one of my favorite students, is cut from the same cloth. Kaitlin is sweet, kind, generous and loving just like her GrandDad. Dal was nearly as passionate about horses and making their lives better as he was about his family. Each animal in the Scott family, whether it is a horse, dog, cat, turtle or fish, is treated with the highest level of care and consideration. I have sometimes been accused of being a little “off” in my belief that animals should be afforded the same degree of respect and value as any human, unlike how most of the world thinks. When I got to know the Scott family it was nice to know I had kindred spirits in that belief.

As life goes on, the equestrian world will continue to benefit from the many products Dal Scott created as well as the multitude of riders and programs that Professional’s Choice sponsored and funded. One of the most moving tributes happened on Thursday at the opening ceremony of the National High School Finals Rodeo.

Michele and her Mom were notified of the planned tribute and they watched it online that afternoon. It was incredibly moving and touched the hearts of all who knew Dal. Even now thinking about it still brings tears to my eyes.

Dal had a passion and commitment to horses in general and equine athletes in specific, and that same passion beats even stronger in the heart of his Granddaughter. Kaitlin has talent and level of focus and fervor for her chosen sport of Eventing that I have rarely seen in an 11 year old let alone an adult. I truly believe that Dal will be smiling down when we all watch Kaitlin compete in the Olympics some day.

I also think it is fitting that he passed so close to the 4th of July because Dal was an example of what anyone can achieve living in this country. He was a true American original. Dal took a great idea, mixed in perseverance, hard work and commitment and from it came one of the most successful equestrian products companies in the country. He was loved and respected by his employees as well as his competitors.

Professional’s Choice will continue to flourish in Dal Scott’s absence albeit with a twinge of melancholy without him at the helm. But they will proudly carry on his legacy with the same dedication and honesty that was Dal Scott’s. And although his loss will always be felt, his family will also carry on his legacy of love, honor, compassion, good works and integrity. It is the Dal Scott way.

As for me, I consider myself lucky on so many levels. Lucky to have known such an incredible person, lucky to use the many products he created and most of all, lucky to consider his daughters, granddaughter and the rest of the Scott clan as part of my extended family.

I had no clue! What a wonderful man he was, and what a great tribute - your's and the rodeo's!
Thanks for 'introducing' me to such a fine man. Now, when I see or handle a Professional's Choice product, I'll have a face and personality to go with it.

Thank you for introducing us to Dal Scott. I never knew he was the founder of Professional's Choice. My condolences to his friends & family. RIP, Mr.Scott.

Thank you for such a great tribute, Terri. I knew Dal only through Michele's writing, but even I realized what a wonderful, charismatic personality he was--Michele is just that good a writer(!) My thoughts are with her and her family as they go through this loss.

Thank you all for your kindness. Now nearly a week later it still does not seem real that he is gone. Michele knows I posted about her Dad and plans to read it when she can. The family is doing as well as you can in these circumstances but there is a large hole in their universe without him here.

I am in tears--both happy and sad. Thank You, T. Dad's Legacy lives on in the human horse lives he touched. I LOVE You.

What a wonderful tribute, Terri. My condolences to Michele and her family. Take care. Lots of love.