We had a fun time on Monday when my blogging friend kel from horsegenes (listed on the sidebar) came for a visit with her horse, Semper (and her husband, Mr Wonderful). After some discussion—should we go on a trail ride, a beach ride—kel decided she’d like to ride through the fields where my husband grows begonias. And this was a good choice, as these fields are only in full bloom from August through early October.
We lucked out with the weather, as the fog was present enough to keep things in the 60’s (kel had just come from the Valley where it was 104), but the sun shone enough to make it pretty and not too chilly. We only rode for an hour or so, but since kel had fitted this visit in amidst a long day of traveling, that worked pretty well.
Here we are in the fields. 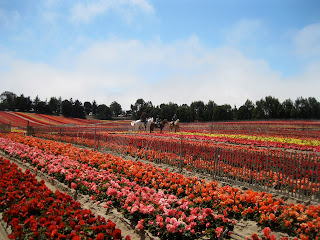 Another shot. Look how much bigger kel’s Semper is than Henry and Sunny. 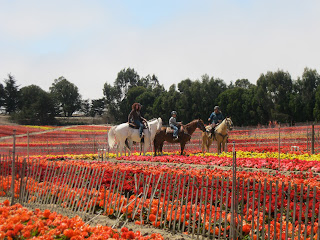 We rode along happily until we came to a ditch that none of the horses wanted to cross. 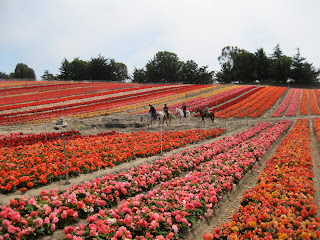 Kel eventually got Semper across it and Wally was determined to make Twister cross. My son, on the other hand, who was at the rear of the group, decided he wanted no part of the battle of the ditch and opted to turn around and go another way. Being a good mom, I went with him—thus proving I am not a good horseman, as I failed to make my horse cross the ditch. However, my days of being a good horseman are pretty much behind me—I’m a relaxed horseman now. (In Sunny’s defense, this is only the second or third obstacle he has ever seriously balked at in five years of trail riding, and I’m just not that concerned.) Anyway, my son and I trotted around the long way around and rejoined the group who had successfully crossed the scary ditch. 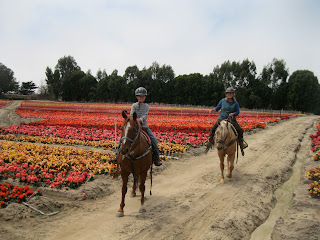 After that we rode down dirt roads to see if we could reach the Salinas River. We didn’t make it all the way to the river, but did reach a bluff where we could see the river and a portion of the Salinas Valley. Then we rode back to the begonia fields. Here’s Sunny and me and kel and Semper. 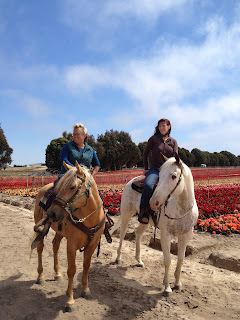 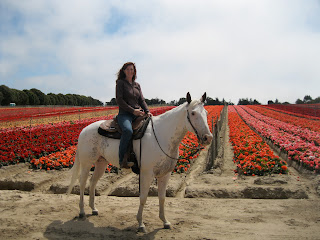 Meeting kel was great fun—I’m so glad she made the time to stop by and visit. She is the third blogging friend I’ve met in real life—the first two being Shanster from “Shanster’s Goats and More”, listed on the sidebar, and Funder from “It Seemed Like a Good Idea at the Time”, also listed on the sidebar. All three times it was as if I’d known the person for years. Our long time being blog friends and emailing really did make a connection that was palpable when we met face to face.
So thank you kel, for coming by for a flower ride, and I have to say, Semper is one of the nicest horses I’ve ever met. If he weren’t so big (and white), I’d want to steal him. Unfortunately, I don’t think I could get on him (!) But what a lovely, kind, well-mannered horse-- with an equally charming rider. It was real pleasure to meet all of you.

Laura we had a great time! The ride in the begonia field was amazing. Thank you for your hospitality. And I agree that even though we had never met in person, it had that "old friends" feeling. I am looking forward to next time.

ps - thanks for liking the big white horse. He will stand patiently at the mounting block so you could get on anytime. I do think he would move in with you... he really seemed to like the weather there.

kel--well, after being in the 100 degree plus weather how could he not like it here? And, you know, despite my old age and uhmm, ample form, I still always mount from the ground. Its kind of a cowboy thing--I know you know. I've just had to buy shorter horses (!)

The Begonia Fields look amazing! What a pretty ride.

Spectacular! California is so beautiful. And how nice to meet another blogger, especially to be able to go out riding together. As for the scary ditch, I'd have done the same as you and your son, Laura, so I'm in the older, ampler bad horsemen/women category. But maybe we're wiser, too, eh? I think your son was very wise to opt out of conflict. And you wouldn't want to trample any of those beautiful flowers.
xx

What a surreal place to ride. Gorgeous.

The fields are spectacular...and as Dom says, sort of surreal. Kel mentioned that some of the colors almost look neon as we rode through them, and I find its, well, dizzying sometimes to be in the midst of that carpet of brilliance. Its quite the experience.