It's a Gorgeous Fall and my Thoughts are Turning to . . .

For those of you living in blissful ignorance (that means anyone who does not live on the East coast) stinkbugs have not only become a major nuisance in the garden and orchards, they are everywhere.  Any warm day, I can find hundreds on my back porch sticking to the screen or in the garage crawling behind trash cans. They fall out of umbrellas and fan blades. They hide in cracks and crevices waiting for the door to open. Once inside they sneak behind pictures and into drawers. My husband even found one in his chili. 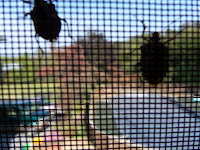 Remember Alfred Hitchcock's "The Birds"? Stinkbugs are even worse. The ones clinging to the porch screen literally whisper, "I'm coming for you. You can't stop me." Because you can't. Their sheer number are overwhelming. And they live up to their name. Grab them in your hand and it stinks with a pungent odor, which means you don't dare step on them or you'll track stink bug smell through the house with every step.

Stink bugs are considered a new pest. They arrived from China in 1998, 'hitching a ride" in a packing crate. They were first recorded in Pennsylvania, and quickly spread. I first spotted them in my garden two years ago. When I Googled them for this blog, I got 2,250,000 hits, which means I am not the only one this fall with stink bugs on my mind. 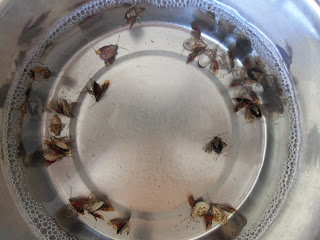 One big problem is they have no know natural enemies -- most birds won't eat them, and even my huge garden spider can't handle more than one or two.  I battle them with a pan of soapy water, making stink bug soup that I throw out far into the woods. Fortunately, they are slow and stupid and once they plop into the sudsy soup,  they quickly drown.  UN- fortunately, a few always escape. They are the smart ones. The devious ones. The ones who will lay eggs and next spring, when the eggs hatch, a craftier, hardier breed of stink bug will arrive, slowly making their way west . . .

Unpleasant little beggars. Perhaps the US Government needs to introduce whatever their natural predator is from China... and then the natural predator for that.... dear god, you could end up with tigers!

This is one scary post for those of us in the west!

I had heard stinkbugs were getting pretty bad some places. Don't think they've made the jump to our island yet...

Your spider comment cracked me up. When it's dry and the grasshoppers get really bad, I pick them off the plants and throw them into the garden spiders webs - "Hello - delicious treat coming for you ladies!"

Ew. We had these nasty tomato-sucking stink bugs this year. They were ginormous and they FLEW. They completely decimated my tomatoes, damn things. I hope we have a cold winter this year - and you do too - so that they all DIE!!!

Perhaps you could import a few hundred more spiders? ;)

I think this blog elicited more comments than all my other posts!
Obviously BUGS in all forms strike fear in our hearts. Perhaps next post will be about BOTS.

Martine--love the tiger idea. We have a few other pests they could take care of.

jenj -- I'm glad I'm not the only one who has serial killer thoughts when it comes to bugs.

Ugh, we've got them really bad too! (N. Idaho) Took the pressure washer to the side of the garage and porch to clear them off. Nasty, ugly, smell bugs...

Gross. I wonder whether we have them; I think we have something similar, but I've never heard anyone here complain about stink bugs. The ones I've seen look kind of like those stealth planes, do you know what I mean?

The most annoying bugs in my life are kitchen moths; no matter how hard I try, how much I clean, how much potentially contaminated food I throw away I still have them flitting around my kitchen. I went ballistic on them a few weeks ago, chucking out practically everything in my cupboards, cleaning out the entire kitchen with white vinegar, scubbing with bicarb, and terminating the blitz with bleach. I then got my steamer out and blasted every cupboard, crevice, etc with hot steam. I killed the majority, as there are far less. But some have survived; I continue to steam the crevices of the kitchen to kill hidden eggs, but nothing seems to anihilate the creeps. Suggestions?

I guess I'm lucky they're not stink bugs... Poor you, Alison!

Nikker -- they've made it to Utah? That is scarey. I thought that so far they were only in the East. I wonder if they will make it to the West coast.

Cesca -- you are the worst of the serial killers! You need to be in the hall of fame. I have no suggestions since you seem to be doing your best to annihilate every %^&* moth. Good luck.

We have them in Oregon -sigh
Pony Girl