Slickrock--the Making of a Book

Slickrock, my fifth book, has always been the overall reader favorite in my mystery series featuring equine veterinarian Gail McCarthy. The series as a whole is set in Santa Cruz County, California, where I live, but Slickrock takes place on a horse-packing trip in the Sierra Nevada mountains, and the whole mystery occurs in that context. It’s essentially a “vacation mystery”. Sort of the vacation from hell.
The beginnings of Slickrock are buried in my distant past—the summer I was twenty-two and spent three months living by myself in a tent at a Sierra lake, with just my six month old dog for company. I wasn’t there to write a novel—no, I was after something much bigger than that. I’d fallen in love with the book, Walden, by Henry David Thoreau, and I was trying a grand experiment in solitary living, to prove or disprove the claims of that book. I meant to write something, of course. My senior project, as an English major, was a paper to be written about my time of living by myself at Burgson Lake in the mountains, and how it compared to Thoreau’s sojourn at Walden Pond.
To that end, I kept journals while I lived at the lake, meaning to weave them into something cohesive later. I did present the paper, but have long ago lost it, but the journals, with their descriptions of my solitary life in a tent at Burgson Lake, stayed with me. Those journals were the beginning of Slickrock.
Here I am with Joey, my six-month-old Queensland heeler, at Burgson Lake, thirty-three years ago. The photo was taken by my friend, Shery, when she drove up to spend a weekend at the lake with me. 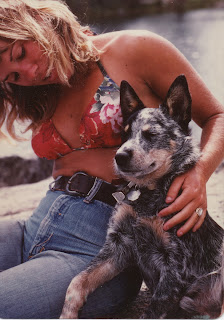 It wasn’t until I was thirty that I conceived the idea of writing mystery novels—more or less inspired by Dick Francis. I came up with the concept of a female equine veterinarian as a protagonist, and began by writing about cutting horses (my first novel, Cutter), as I had spent my late twenties training and showing cutting horses. By my thirties I was involved with team roping horses (which play a large part in my third and fourth novels, Roughstock and Roped). I was also taking many horseback pack trips into the Sierra Nevada Mountains on our own horses. On the longer trips, we crossed the spine of these mountains many times, going over several different passes, and camped at dozens of high Sierra lakes. The longest trips lasted two weeks or so. I kept journals on these trips, too. And gradually the concept of a pack trip mystery began to assume form.
I wanted to write about the pack station that I had worked at, and the lakes and passes I knew. The trails and their various obstacles were big in my mind, including the infamous slickrock, for which my novel is named. And, of course, every wreck and near-wreck that had come our way, as well as some described to me by friends, would make their way into this pack trip story. But…I needed a plot.
Well, as I often do, I borrowed from life. I had heard a tale of real life villainy involving horses that interested me (can’t tell you—it would spoil the story). And I had, myself, stumbled upon a very dramatic crime scene that I thought would make a good opener for the book. And then there were all my Sierra journals, written while I was up in the mountains, for background. And so Slickrock was born.
I tried to incorporate all my real life pack trip adventures into this book, as well as my favorite places. The picture below shows me riding across Kerrick Meadows, high in the eastern Sierras, and the scene of a fairly thrilling horseback chase in Slickrock.

The horse Gail rides in the novel is Gunner, but most of my pack trips adventures were on Flanigan, and it is his stalwart nature that is the bottom line in both the story and my real life travels. This is Flanigan, possibly the best horse I ever rode. 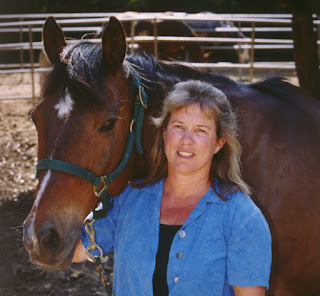 And here I am on Flanigan at Wood Lake, a lovely Sierra lake which appears in Slickrock. 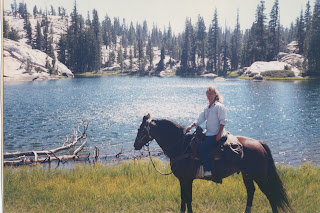 So there you go. If that doesn’t make you want to read the book, I don’t know what will. Except the fact that it is for sale for 99 cents on Kindle—only until the end of this week. So now is the time, if you’re interested at all. I honestly think that if you enjoy my writing on the blog, you will enjoy this novel. 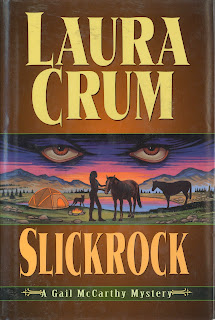 Here is the link to the Kindle edition of Slickrock. If you do give this book a try, I’d love to know what you think of it.

That is a beautiful picture of you--really captures the moment in time. I, too, was a lover of Walden, but I didn't have the balls to go live out on my own like you and test it. Can you remember any of what would have been in the paper?? What did you conclude afterward? The main thing I've taken from it after all these years is no matter what happens--it really doesn't take that much to survive--so no need to worry. Oh, and I got the Kindle version of Slickrock...you piqued my interest!!

Thasnk you, Linda! I hope you enjoy Slickrock. I'd love to hear your thoughts.

There were a lot of insights that came to me from living alone in the woods. Like Thoreau, I came to value company--when you haven't seen another human being for ten days, a chance met backpacker is a welcome visitor. It tested my courage to be out there all alone--I was aware that the trappings of civilization were no use to me--this was before the days of cell phones, and no rescuer could have found me, anyway--the lake was not even on a marked trail, let alone a road. I slept with a gun under my pillow, and was sometimes pretty nervous of odd noises in the night. I don't think Thoreau dealt with fear as much as I did. But I stuck it out.

The difference in your fear level versus Thoreau's would be an excellent paper in itself. Has a woman ever written a female version of Walden?

Well, "Pilgrim at Tinker Creek" is a little like that. But she doesn't write about fear, and I don't think she was way out i the woods the way I was. Fear was an issue for me for sure, and coping with that fear was one of the big lessons I learned.