Today we have something new for you. Though we mostly concentrate on fiction here, today’s post features a wonderfully entertaining non-fiction guide to the sport of endurance riding, written by one of my favorite writers, Aarene Storms. Many of you know Aarene, from reading her blog, Haiku Farm, listed on the sidebar. For those who don’t, Aarene has spent almost fifteen years devoting herself to the sport of endurance riding, completing many fifty mile rides on her sensible Standardbred mare, Fiddle (and previous to Fiddle, on a rather hot-headed Arab named Toad and an “opinionated”—to quote Aarene—Standardbred named Story).
As I can attest from my years of trying to “break into” the cutting horse world without an experienced friend/mentor, trying to get started in an unfamiliar horse sport can be intimidating and can seem overwhelming. How I wish I had had a book like this one. Endurance 101 provides the perfect mixture of experienced advice and information, geared to the person who has always wanted to try endurance, but just doesn’t know how to go about it, as well as plenty of helpful tips for those who are already embarked on the sport.
So for those of you who have wondered what it would be like to try endurance, and those who have a burning desire to pursue this sport, and even those who are just curious, here is the book for you. Aarene is a lovely writer, and besides, she is very funny. (I just love the Bad Idea Fairy and her horse “Hold My Beer and Watch This”). Even more than all this, she is an awesome horsewoman, who knows whereof she speaks.
May I introduce Aarene Storms and her good mare Fiddle, pulsing down (almost instantly) after completing the 50 mile Renegade Rendezvous Ride in 2011. 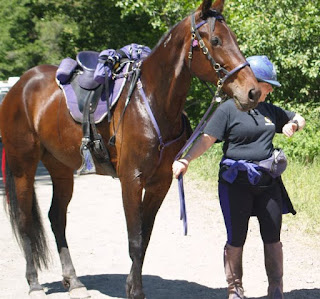 Aarene and Fiddle doing dressage (they are multi-talented, as you see). 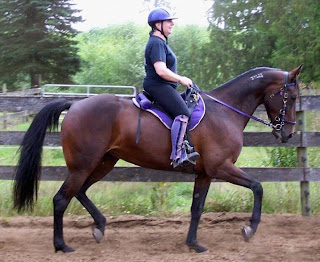 And now Arene will introduce you to the Bad Idea Fairy (keep your distance) and her new book. Congratulations, Aarene! 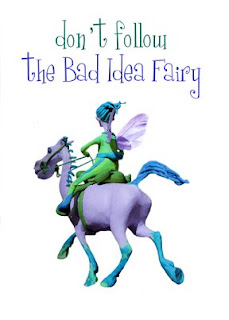 Maybe you’ve never heard of the Bad Idea Fairy, but I’m sure you recognize when she’s been around, clonking people with her magic Bad Idea Fairy wand.  Why else would perfectly sensible people do perfectly dumb things like try to take a close-up picture of a bear cub?

See?  I knew you’d recognize her.

The Bad Idea Fairy and her friends provided much of the inspiration for my book Endurance 101: a gentle guide to the sport of long-distance riding.  In more than a decade of riding endurance, I’ve seen the Bad Idea Fairy many, many times.   Sometimes, she flutters right above the heads of experienced riders who usually make good choices but occasionally goof up and make a bad one.  Usually, however, I see the Bad Idea Fairy hovering over the heads of riders who are new to the sport, and who don’t have a lot of experience and practice at keeping her away.

Even riders who are very skilled at other equestrian disciplines like dressage or team penning or stadium jumping or riding in the wilderness can sometimes get sucked into a Bad Idea Fairy plan.  Endurance 101 was written partly as Bad Idea Fairy Repellent.   The book won’t make you immune to dumb ideas, but it’s designed to give you enough information so that you will recognize a Bad Idea when you see it flying towards you on the endurance trail.

The book is also written to inspire you to try something really challenging and really rewarding:  spending a long day on a long trail with your horse.

Some folks ride with friends, others prefer going solo.  The trails traverse rolling hills, mountains, deserts, and some of the most beautiful wilderness areas in the world.  There are veterinary checkpoints along the way, where horses are evaluated and given a chance to eat, drink, and rest before heading back out, refreshed and ready, onto the trail.

You can do this sport.  This book can help you.  The book makes some suggestions about choosing a suitable mount and suitable gear, but the most important part of  the equation is you, the rider.  If you like a challenge that will leave you tired, dirty, hungry, and SMILING, then endurance might be the sport for you.

And if you want to ride endurance, read Endurance 101 first.

And, guess what?  The e-book edition is on sale  right now!

Because saving your money so you can buy more carrots for your horse is a really Good Idea.

It sounds like a great book! And yes, I know that "bad idea fairy". She's the one who convinced me it would be ok to go on a trail ride with some people whom I don't have the same approach to trail riding as me, and who didn't see a problem with riding past the garbage disposal area on a Saturday morning(it's called a "déchetterie" in French) - where everyone goes on, well, Saturday morning, to take their big cumbersome rubbish and especially their empty bottles...Crash crasg clink clink crash! The noise is insane and my horse went insane! But he showed me he was very good at piaffe/passage, as well as cantering on the spot. Not bad at pirouettes, too, especially on tarmac :) Hmm, that bad idea fairy definitely got me that day!

I wish you many many sales :)

Big congrats to Aarene and her talented photographer Monica! This book has been a huge labor of love for them, but most importantly: it rocks. It's well worth the money if you're interested in any long distance riding, IMO. Go Team Sensible!

Aarene - your book sounds awesome, and I wish I had something similar to read back when I was doing endurance (eons ago.) Can you post a link on where to buy it? Is it published yet? Thanks so much!

Thanks for reading, everyone!

The book is available now through a well-known online bookseller named after a river in South America. You can buy it there, if you like.

BEFORE YOU GO THERE:
If you'd like a discount for 20% off the purchase price, send an email to release@Endurance-101.com. We'll send you a discount code.

Love it!!! I love to laugh, and as I read this, I realized, I AM the Bad Idea Fairy, lol!
I'm going to have to order this book!!

Mikey, that is hilarious. "I realized, I AM the Bad Idea Fairy." ...I love it. And is your horse also known as "Hold My Beer And Watch This"?

My dears, we are ALL the Bad Idea Fairy at times.

(Ahem. The time I really wanted to go back to get a picture of the BEAR comes to mind...)

If you'd like to read part of the book, there is a free sample on the website: www.Endurance-101.com Click "Sneak Peek" and be ready to smile.

I love the idea of this book - educational, informative and amusing are such good qualities!

I just started reading my copy last night- and I'm enjoying it immensely!

My horse just got his shoes pulled, it's raining, and cold- what better time to read and get all fired up for next season:)

As one of the cover girls let me say that I LOVE the book and wish it was around when I was getting started. Fortunatly I had good sense on my side and didn't meet any bad fairies that first year. I also met Aarene who was known as one of the "purple people". She stood out so it was a good thing she was a good example to follow! Way to go girlfriend, I am proud of you!!1

I'm not sure I was a "good influence" in the early days...the Bad Idea Fairy was flying close behind me pretty often! Fortunately, there were some wise folks who kept me out of the deepest pits of trouble (usually)!

I'm glad y'all are enjoying the book, and I can't wait to share it with more folks. Please ask for your discount if you haven't already!