My First Autumn Without Riding

It's my own fault. First I decided to become an entrepreneur even though I couldn't balance a checkbook. Then I buggered up my knee, which took a month to get back to normal. At the same time  I rescued a Ziggy who demanded every minute of my attention. Then school started with full classes. And now I have a looming book deadline (Monday!), which is consuming every second -- even Ziggy's walks are shorter.

I am not complaining because Hurricane Sandy missed us here in the Shenandoah Valley. Real hardship is having your home flooded or swept into the ocean. Not riding for the first fall ever since I was five is just weird. Halloween-type weird for me. I rode through pregnancies, newborns and two toddlers. I rode through writing a series -- a book every other month -- and teaching full time (not at the same time thank goodness.)  The only stretch I have not ridden this long was when I broke my back and spent four months in a hospital and then rehab. Even then I couldn't wait to ride and got back on my then pony as soon as I got the doctor's okay. Now winter is roaring around the corner, and Relish has forgotten what a saddle feels like. 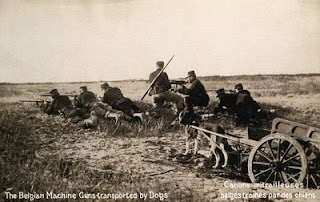 So why not tack him up and get on the trails? My biggest excuse is my book deadline. I am writing a historical fiction for young readers tentatively titled Darling: Mercy Dog of World War I.  In my career I have written about almost every topic, many of them about dogs and horses. But WWI was a new one for me (I didn't even know it was called The Great War, which tells you how little I knew) so the research has been doubly-intense. The war was complex and brutal, and the subject of mercy dogs hard to find. Every nuance had -- and has-- to be researched from the soldier's life in the trenches to the real battle tactics of the Battle of Messines Ridge. 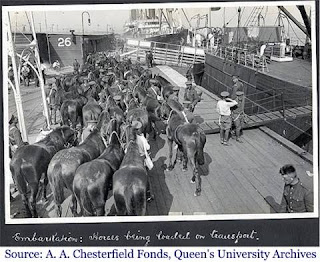 Dogs and horses were used extensively and the photos -- and carnage -- were hard to stomach. It is estimated that over 900,000 horses and mules were killed in the war -- often from starvation, disease and overwork (Most of you have watched War Horse) When Europe and Great Britain ran out of horses, the United States rounded up mustangs and sent them over. I can't imagine their terror. 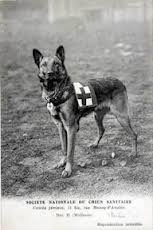 Dogs were just as expendable. They pulled machine guns, acted as sentries, carried messages and located and hauled the wounded. None of these animals chose to go to war, yet they served 'man' with incredible patience and strength. I hope when Darling is finished, it will not only be an exciting read for kids, but a great story about our history and how one dog contributed.

So that's my excuse for not riding and I am sticking to it.

Anyone every had a non-riding stretch? How did your horse react to finally getting saddled up again?

I'm having one now, and I will let you know how my horse reacts, if I can get the time to ride before it is -20.

I didn't ride for over a year when I was pregnant and then raising my baby. But I had a friend who exercised my horse.

I often will miss a month or so of riding in the winter when it can rain non-stop, and my older, solid geldings, who have plenty of room to run around in their large corrals, don't seem to care at all. They are just the same whether I've ridden them yesterday or a month ago. Of course, when I was riding young horses, things were a little different. A green four-year-old could feel pretty fresh after a week off.

We (my son and me) are just finishing the book "War Horse"--did not see the movie. The book gives a clear picture of WWI -I recommend it for older kids who are ready for such a theme. It is not overly graphic, but certainly moving. We have had many interesting discussions about the war and the use of horses...etc I don't think I'd want to see the movie.

I look forward to reading your book!

Your book sounds very interesting. I can't imagine how an animal must feel being drawn into battle.
I know quite a few people who don't ride for ages, then hop on, and seem to go on just as if no time had passed.

Alison - I'll be really interested to read your new book. I've never heard of mercy dogs before, and I want to know more.

And yes, like Dreaming said, when you finally hop back on your horse, everything will be just the same. Sometimes we just can't juggle all the balls we have in the air. Good luck with all of your projects!

I had shoulder surgery in November '09 and was off for six months. Decided at that time that I was not riding in the POS "custom in price only" saddle that I learned subsequently was a 17" when the saddle "expert" and I discussed that a 17.5" was too small for me.

I kept telling the "expert" that the saddle felt "wrong" and I hated the knee rolls that stuck out from under the flap, but of course he was "the expert" and I was going broke shipping the saddle back to him. Bottom line, he won.

The saddle fitting I had planned for January of this year at a dressage barn was put on hold with first, an impaction colic and then a lameness that has required two Tildren treatments. Horse is back to work now, but my saddle fund is depleted. (Tildren be MIGHTY $$$$).

I will say the horse DOES like being back to work. We're working on getting a saddle that works for me, and with luck I will be back at it before the horse is 25, I'm 75 and we can do the Century Club thing ;o)

Cindy -- please let me know how it turns out. Where do you live that it gets -20?

Laura -- I will send you Darling when it pubs. Your son can review it for me! I cried most of way through the movie War Horse and I had read the book beforehand so I knew what was going to happen.

Linda -- you will be the first to review it. (When you have time that is between all your projects.)

TBDancer -- Century Club? Is that for real? If so, I need to join. Good luck with your saddle -- and with getting back on your horse.