In my last post, I raptured poetic on beginnings. (Okay, raptured is not even close, but I am trying to be creative here at 10:00 at night.) This post I am going to talk about horses and history. I am cheating and using an article I wrote several years ago because I have a book due Monday for American Girls. I am very deadline-conscious. I have always honored my deadlines unless there were circumstances out of my control. That means  getting this blog done as well as making sure my AG book is in my editor's email inbox on time.

Writing about horses and history is a no-brainer for me. I have been horse crazy since my first Steiff pony and Billy and Blaze picture book by C.W. Anderson.  Decades later, my passion is still with me: I ride my Quarter Horse, Relish, read horse books and write about horses.

Under my real name Alice Leonhardt and my pen name Alison Hart, I have written over fifty books about horses. Many are contemporary including Shadow Horse, an Edgar nominated mystery, and its sequel Whirlwind (Random House).  I also have combined horses and history to create suspense-filled historical fiction for Peachtree Publishers. The two meld perfectly because human and horses have been intertwined as early as 3500 BC when horses were raised for milk and meat in . (see the fascinating March 2009 article in National Geographic http://new.nationalgeographic.com/news/2009/03/090305-first-horse-domestication.html)

Horses have been used (and exploited) by humans in all parts of the world. In , horses became extinct about 10,000 years ago and were then reintroduced by 16th century Spanish Explorers.  That gives me centuries of history to write about. My Racing to Freedom trilogy (Gabriel’s Horses, Gabriel’s Triumph and Gabriel’s Journey) focuses on the 1800’s when horses were necessary for transportation, farming, commerce—and war.

During the Civil War, both the Confederate and Union armies depended heavily upon horses. The animals were needed to pull wagons, cannons, and ambulances to and from battlegrounds. The horses also carried cavalry soldiers and officers into battle. About 1.5 million horses and mules died during the Civil War.
From “The History behind Gabriel’s Journey” by Alison Hart. 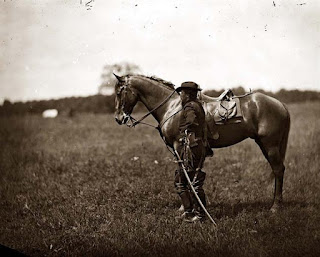 Writing historical fiction means I have to know the facts. The Racing to Freedom trilogy took over two years to research. I have notebooks and file folders of notes and photos from visits to and , and ; magazine articles, old maps, and scrawled notes from over two hundred books and online sources. I love this photo from the Civil War. The horse is gorgeous--shiny, alert, handsome and well-fed. But the journals and statistics on horses during the war detail starvation and death.

In a chapter from Gabriel’s Journey-- which is about an African American cavalry unit that fought at the Battle of Saltville, Virginia-- I create a 'scene' around the number of dead horses:

I lead Sassy and Hero up onto the road. In front of us, a bulky mound lies in the center of the lane. The horse that was shot is dead. Blood oozes from its neck and shoulder. Already someone has stripped it of bridle, saddle, and gear. Soldiers lead their mounts around it or step over it. No one but me pays it any mind.
I remember ’s words when we first visited and saw the broken-down remounts: Horses don’t choose to fight, and they sure don’t get no enlistment fee.
And no glory neither, I see now. The body will be left for vultures and varmints.
My eyes blur. I lead Sassy and Hero around the fallen horse and say a silent prayer.

Whether it’s a pony on the prairie during the Blizzard of 1888 (Anna’s Blizzard) or a slave finding freedom in 1865 (Gabriel’s Horses), each novel I write must be filled with vivid scenes that not only convey our history, but bring it to life for readers.

Alison, one of my favourite monuments is near Oxford Street in London. It's a memorial to animals injured and killed in war. It's beautiful, and very moving, and often covered with bouquets of flowers. Your post reminded me of it. I'm sure there are other similar memorials in other places in the world, but I doubt many people think of them.

Anyway, you impress me with your knowledge, not to mention with how many books you've written. Wow.

I have to admit that most of my research comes out of my many years owning, training and competing on my horses. Since I write a contemporary series, I don't need to research history. And I have had enough horsey adventures--veterinary and otherwise--to fill a dozen books. But I am very impressed by those who write historical fiction--and all the research that goes into it. My son and I LOVED Gabriel's Horses--and we really learned a huge amount about the Civil War. Thank you!

Research is definitely an important thing! But I love that having facts correct can be so easy when horses are a constant part of your life :)

Francesca,
I would love to see that monument and that flowers are still strewn across it today shows how much we love our animals.
Laura--I don't have the riding background you (and many others) do so research is a must for me. Glad you loved Gabriel's Horses. Did you read the others in the trilogy?
Christine--I hope I spelled Steiff right. It's the German company that has been making quality stuffed animals for years. Today a good one can be worth 1,000s. My pony was loved to death and is barely standing.

Alison--Not yet. But its not out of lack of interest. We have SO many books on our to-read list. Right now my kid's class is doing a play about the Lewis and Clark expedition, and we're reading a book about that called "The Captain's Dog". But I do plan to finish the Gabriel trilogy.