How a Series Happens

Hey guess what, I know how a series happens now.

When I was a kid, I really wanted to read either A) crazy long books or B) absurdly long series of books. I needed my stories to go on and on and on. Walter Farley received gold stars for his twenty-odd  Black Stallion books. Even the Island Stallion. And, grudgingly, The Horse-Tamer. I guess.


Now most of the books I read are one-time-only deals. Literary fiction authors tend to write a book, finish the book as tidily or as untidily as they please, and then close the door behind them when they leave. Lights out. On to the next project.

I always assumed I'd do that, too. I have a list of book ideas, and they all contain new characters and settings that I haven't written about yet.

Maybe it's a detachment problem, but I don't want to leave Alex and Alexander, the stars of The Head and Not The Heart, behind. What happens next?

So... I wrote another book about them. Other People's Horses deals with what happens next. It's taken care of, right? Alex goes to Saratoga, she becomes a full-fledged racehorse trainer in her own right, she deals with some grimy characters, she makes some unlikely friends, she has some nice horses. Excellent. Good night.

This is going to become a problem for me.

I'm just completely invested in Alex and Alexander now, you see. And their farm. And their horses. After all, for two books now, that's more than two years of my life, I have thought about what would Alex do? I went to Saratoga last summer and walked around the beautiful town and thought, Alex would love it here.

I want to write about Alex in Saratoga.

And so I did. And it became a daily obsession. Alex in Saratoga, lucky girl! Or was she?

Riding on the subway, staring out at the graffiti on the tunnel walls, wondering how Alex was going to fix a problem horse. Walking through Midtown, drinking coffee and dodging tourists, wondering how Alexander will react when Alex tells him about her new horse she bought without telling him. These people are in my head, you guys.

Other People's Horses is now available as a paperback and an ebook from Barnes & Noble and Amazon. The GoodReads giveaway for a paperback continues through April 4.

There's also an interview with the photographer who provided the image for Other People's Horses at my blog, Retired Racehorse. 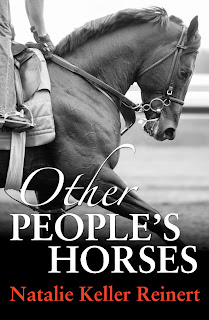 As someone who has done a twelve book series about my horse vet protagonist, I hear you. People would ask me if I wanted to write "something different," but the answer (for me) was that I was too involved in Gail's life and I wanted to take her through the next big life change. Believe me, you can take a series protagonist through a lot of interesting stuff in twelve books written over a twenty year period. I hope you and Alex have an equally long and satisfying story.

Natalie--have fun with your characters and plots!

Strong cover-I always loved photos and always had trouble convincing the publisher to go that route.

Natalie, I can relate. I was so tempted to write a sequel to the characters in Mucho Caliente...in fact I still think about them everyday and it's been a long time! So go for it, enjoy it, those people are your friends! It's depressing to leave your friends!

I miss Emilio and Gemma. Maybe it's time they told me how they're getting on...

When I finished my first novel I realized there was more of the story to tell, but now that the sequel is finished, it's done. I'm moving on.

Characters have a way of sparking to life and then staying with you. Readers like series, too. BTW, I think I remember that Black Stallion illustration. Is that when Alec sees the silks before the Match Race?

I think it'd be wonderful to write a series, but a lot of hard work!

I've just finished writing my first novel (perhaps one that goes on, on, on ;)) but it is complete in itself, I believe and wouldn't require a follow up story.

Sorry, I was away and forgot about comments!

@Laura, 12 books and 20 years is impressive. I'm not sure I have that staying power, but you never know until twenty years have gone by and you're like oh wow, I wrote twelve books, right?

@Alison, thanks. I SO prefer photographs, when it comes to horses, to illustrations. There is so much good photography and so many bad paintings, I'm not sure why any graphic designer would go for the difficult route of finding decent artwork.

@Francesca, if they're in your head, there's only one way to get them out...

@Susan, I'm going to reach that point eventually. But isn't it fun to say, "And then THIS happened!" and everyone gasps and says "NO!"

@Rhoda: Spot on. That's the scene.

Natalie--That is exactly my emotion. Oh wow--can't believe I wrote twelve books. But when you get caught up in the protagonist's life, just as you describe with Alex, it seems that there is always something more to come.