The forecast of snow can strike dread in the horse owner's heart. Shoveling out doors, pushing wheelbarrows through drifts and chopping frozen water is all part of horse-keeping in the winter. Virginia had been lucky all season until the beginning of March. And then we got a corker of a storm! 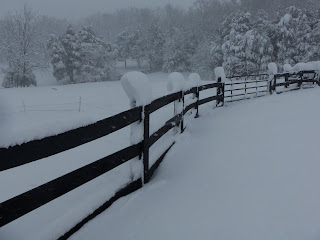 About fifteen inches fell overnight and kept falling the next day until we had twenty inches and the sharp  wind blew drifts as high as two feet. Fortunately, we never lost power although most people in the area did.  After the 'derico' last June when we lost electricity for five days, my husband bought a generator. He was almost sad not to try it out, but he did get to use his new snow blower on the tractor.
However, technology didn't help me much. 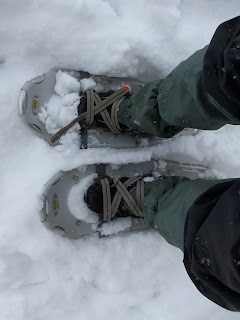 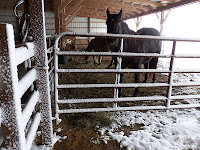 I have braved plenty of snowy seasons, and after strapping on my snowshoes, headed across the yard and down the hill to the neighbors (where the horse are pastured over the winter) carrying my little kid's plastic shovel.  It was an adventure, and shoveling out the doorway after plunging through thick snow was exhausting. The horses were safe and dry in the huge loafing shed, but glad to see grain in their buckets and lots of hay.  Snow had blown into the one side and covered the inside fencing, but it didn't take long to clear, and horses like mine that are allowed to grow winter coats are super-hardy.  I, however, was cold, wet and puffing like an old lady after trudging back up the hill to home. 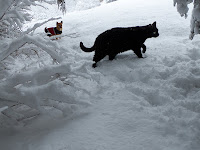 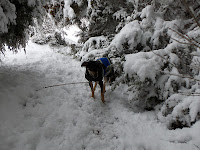 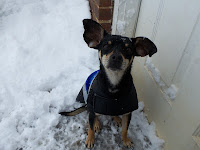 The tiny dogs were not as hardy as the horses and initially dismayed at the storm.  To keep them from doing their business right outside the doorway, I shoveled a poop path for them in our little woods. (Talk about spoiled!) But really, there was no way the Chihuahua princess and Ziggy the hyper-reactive mutt could handle two feet of powder. With coats on, the four of us (Chuck the cat was also excited about our poop path) ventured outside.  Our walk was short, and Ziggy especially did his business quickly and beat it back to the door ready to go inside. Fang was more adventuresome but she has been an outdoor girl since she was a puppy. Poor Ziggy who spent most of his life in shelters, has been clueless about the weather. If he could he would carry an umbrella in the rain and wear ear muffs in the cold.   The snow stuck around for several days, but true to March weather, we soon had 60 degrees and  . . . .  . mud. But that's another story.

Did you get hit by the March snow?  Are you ready for spring? Or is it still a long way off?

You could send every flake our way and I wouldn't complain. We need moisture desperately.

I don't know how you can trudge around in the snow, shovel it, etc. and be cold. I'd be so hot I'd have my coat off.

I like dealing with snow and other adverse weather. It makes me feel like I'm doing something real to survive and keep my animals alive.

We've got spring here on the California coast. I spent all day mowing the grass by the house--the horses mowed the grass around the riding ring and along the driveway for me. Its tank top weather here. I've got to say...I lived two winters where snow stayed on the ground from December through March (in an average year) and I did not care for it. I like our Mediterranean climate. But your photos of the snow are very pretty.

I was patting myself on the back for the lovely stroke of luck to have such a beautiful spring...only to find out it's suppose to pour by Tuesday. Ah well. Such is the month of March.

Susan -- you must be in the drought-ridden midwest. Did you get snow as well? At least it's moisture.
It was cold enough that I never got hot.

Laura--spring already! Lucky you. I hope we'll get to see flower photos soon.

Mel -- I'd rather the snow than the rain. When the horses slog around in the mud and cut up the pastures it makes me nuts! Enjoy your spring flowers after the rain.

Oh Alison - I feel for you, but I loved your pics of all your critters dealing with the snow. The thing I hated most about snow (especially with continuing frigid temperatures) was keeping the ice balls picked out of my horses' feet. I hope your weather breaks soon and I wish you a lovely spring. Soon, I hope.

Linda--how is the weather at your new home??? Have your critters adjusted?

I loved seeing your photos, Alison! Snow always photographs well...but goodness me am I sick of it. We had more of it yesterday; it's melted where I live but when I drove to the stables this morning there was about 15 cms of fresh thick very wet and heavy snow. The land is so waterlogged, it's like treacle. And it's spring in two days!!! I guess it's Mad March, but it really has been a long, harsh winter. Sunshine, please.

It snowed in England too, wet sticky snow that soon melted to make the sodden ground even wetter.

Snow was familiar back when I lived on the continent far inland, a couple of feet at least. We dug tracks to walk about and the cats walked in these, sometimes just the tips of their tails visible like submarime periscopes in a white sea.

White Horse--love your descriptions of the cats--i think it needs to be in a poem.

Cesca -- spring is late here, too. It's good you have an indoor arena, but I bet you and Qrac are ready for a real trail ride.